Wander outside reality door ZDY ' LOVE
now you really got Travel to Nepal (9) : Another routine
Use love to fantasize... 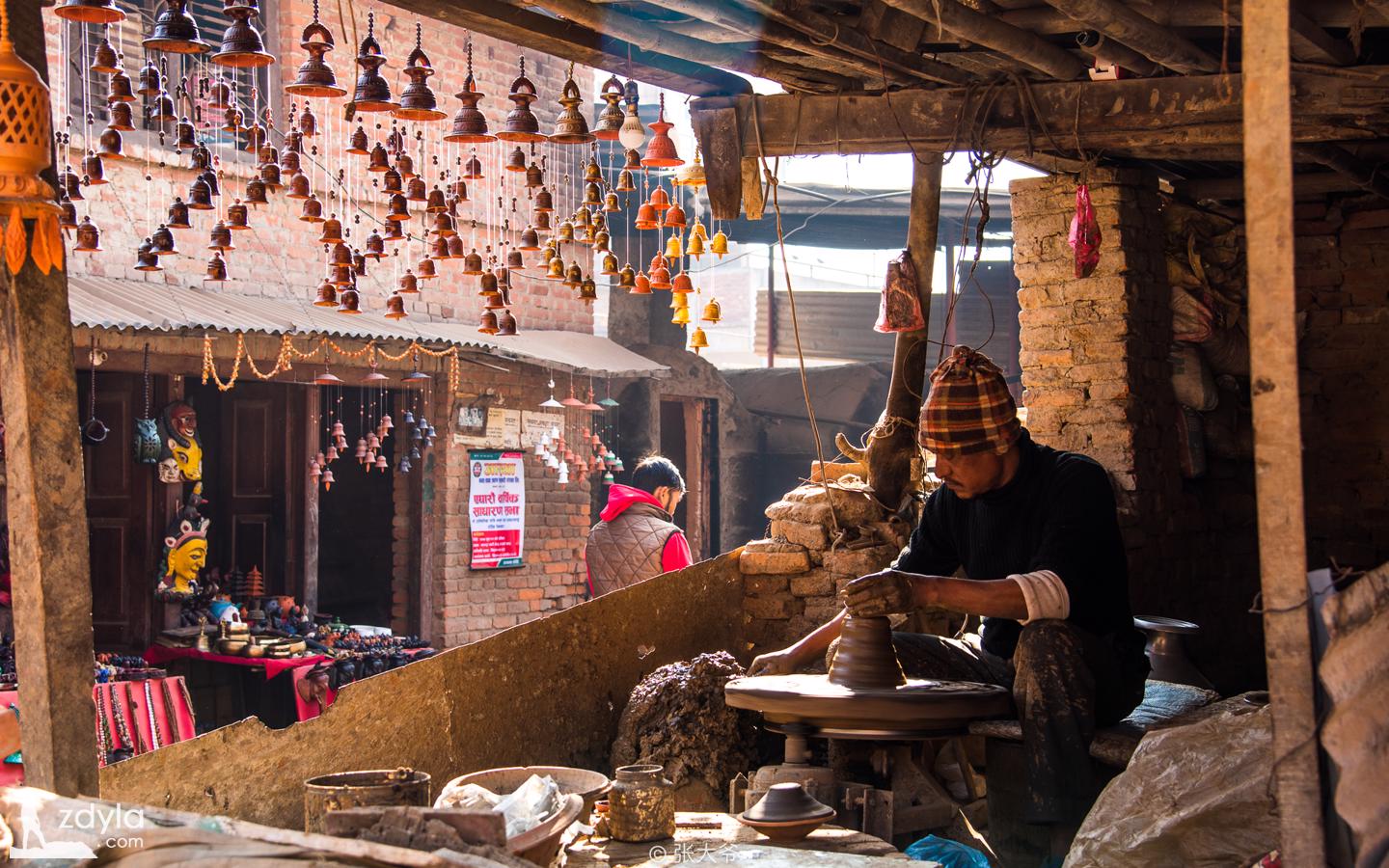 After touring Duba square and taomadi square, there is still the last square, pottery square.

Compared with the previous two squares, there are no grand temples here, but the strong folk flavor. Pottery makers stick to this ancient industry, respect the traditional skills left by their ancestors, and work hard. The men knead the clay and knead the clay, while the women and children are responsible for decoration and drying. The newly fired pottery is taken out in rows in the square, forming a unique landscape. 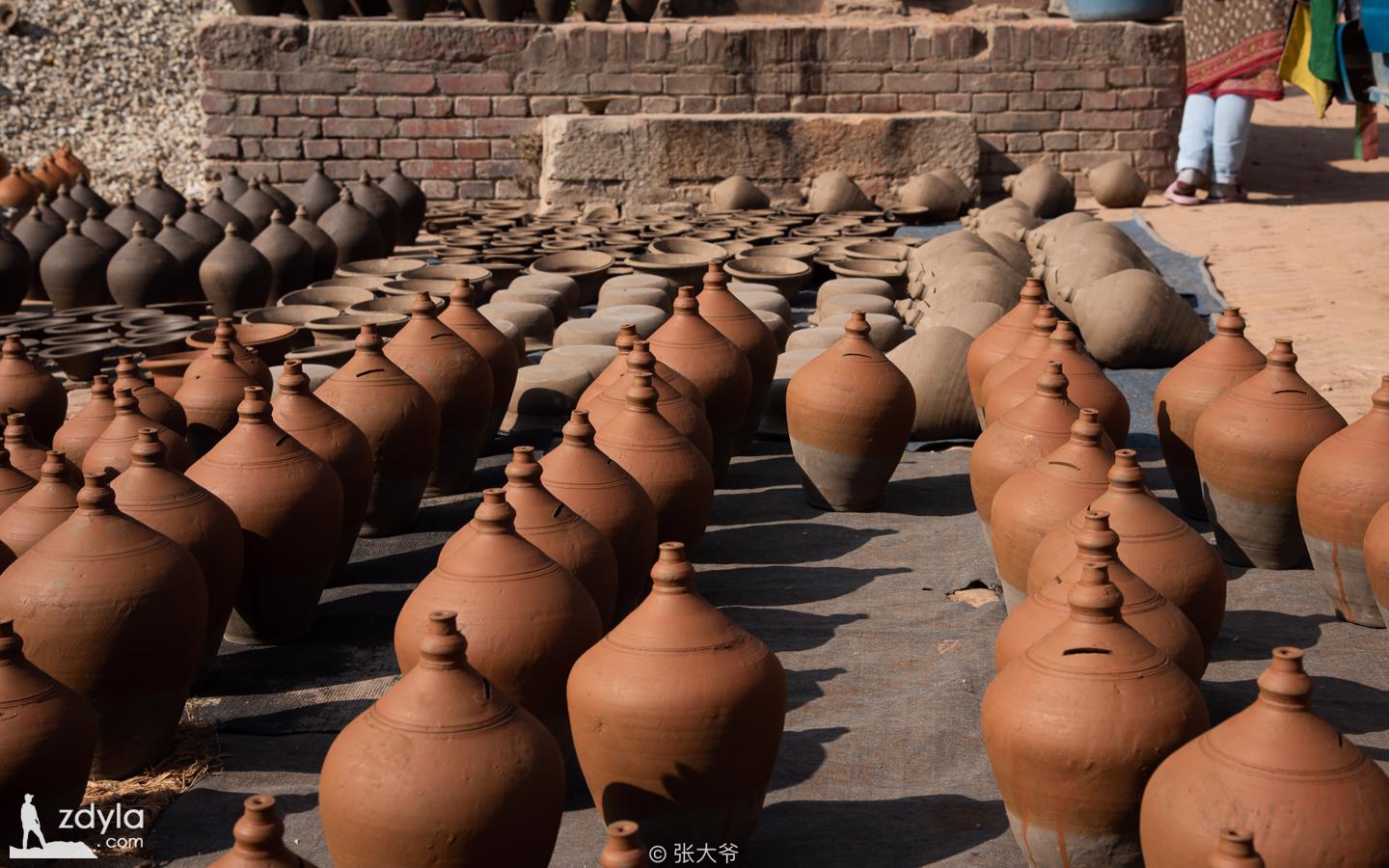 Before entering the square, I saw that the open space was covered with semi-finished pottery which was drying. After entering, I would fall into the sea of pottery. This kind of pottery is not as beautiful as I thought, and it's not very good-looking. It's mainly family water containers. It's said that most of Nepal's pottery comes from here.

The guide told me that all the pottery was made by hand, and the selected clay was excavated from the local ground about five or six meters deep. Every process from casting, making, drying, handling, firing, finishing and packaging was displayed in front of you. Families living on traditional pottery making techniques took root in the square as early as 1300 years ago. In 1646, a wealthy Potter donated money to build the temple of Jeth Ganesh in the center of the square, reflecting the long history of pottery making around the square. Even today, the priests in the temple are still from the caste of potters. 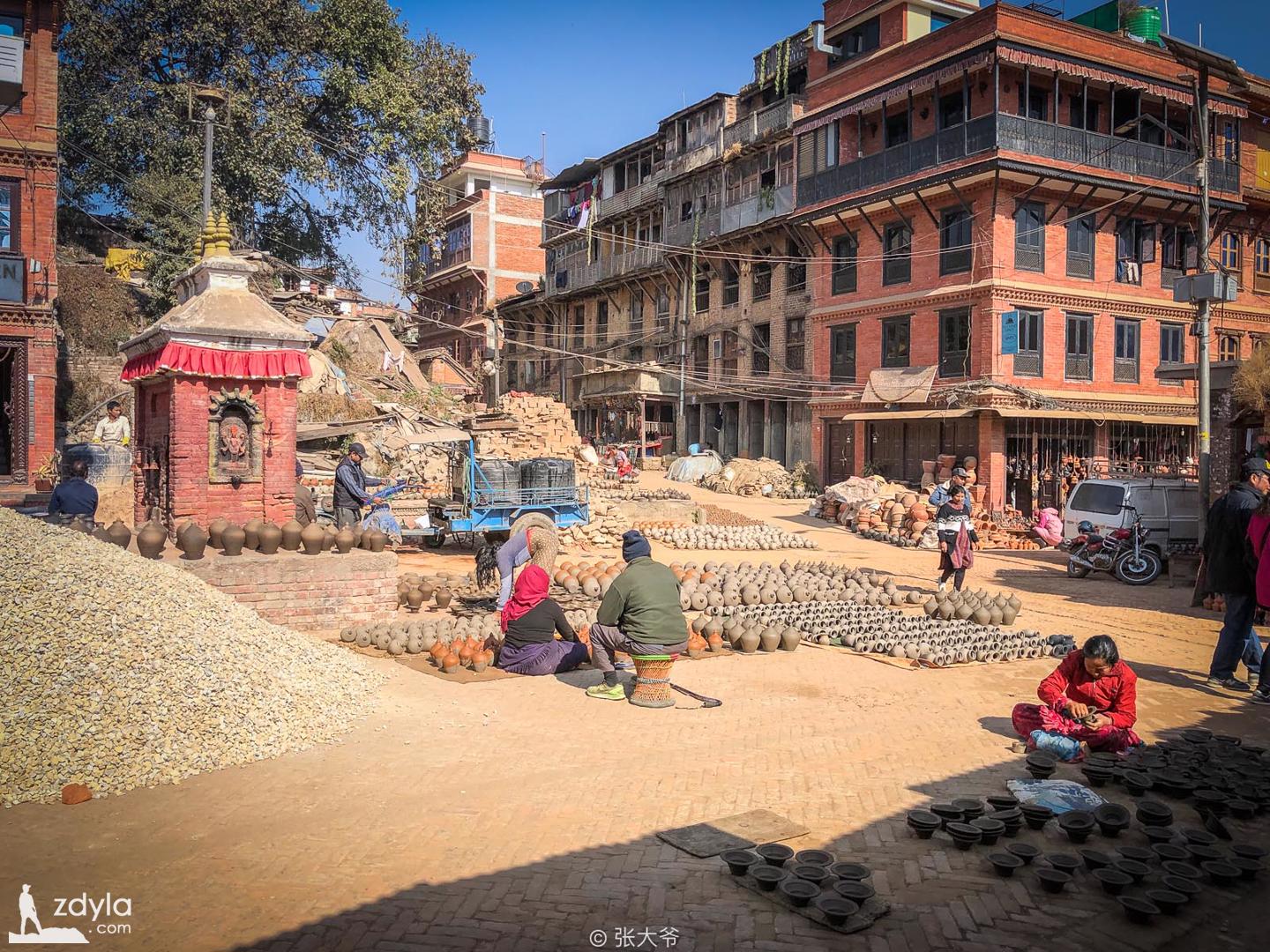 Around the square, there are many shops selling pottery, including those who also work as potters' workshops. Many photographers surround the shops. They do not want to buy Pottery, they just want to capture this precious cultural experience. However, with the progress of society, pottery has been gradually eliminated by the times. Most of the busy potters in the square are performing. Although paying for photos has become a hidden rule between tourists and them, it is also one of the few economic sources for local people.

The pottery square is not big enough. Half an hour's shopping is enough. Because the quality of the pottery is not so good, Kyle and I are not in the mood to take anything.

The tour guide's work is coming to an end, and the tour of the three major squares agreed with him has been completed. We are going to pay him the salary. Unexpectedly, he waved his hand and politely treated us with Chinese tone. He said, "would you like to try badagon's yogurt? Delicious yogurt... "

"Well? Is it delicious? " Kyle and I couldn't help but be surprised. We didn't expect that his courtesy would also bring a surprise.

The guide said with a smile, "yummy, that's the best yogurt in the world..." With that, he took us into the alley next to the square.

The yogurt in badagon is called "Juju Dhau". In newwali, "Juju" means king, "Dhau" means yoghurt, so its name is called "king of yoghurt.". 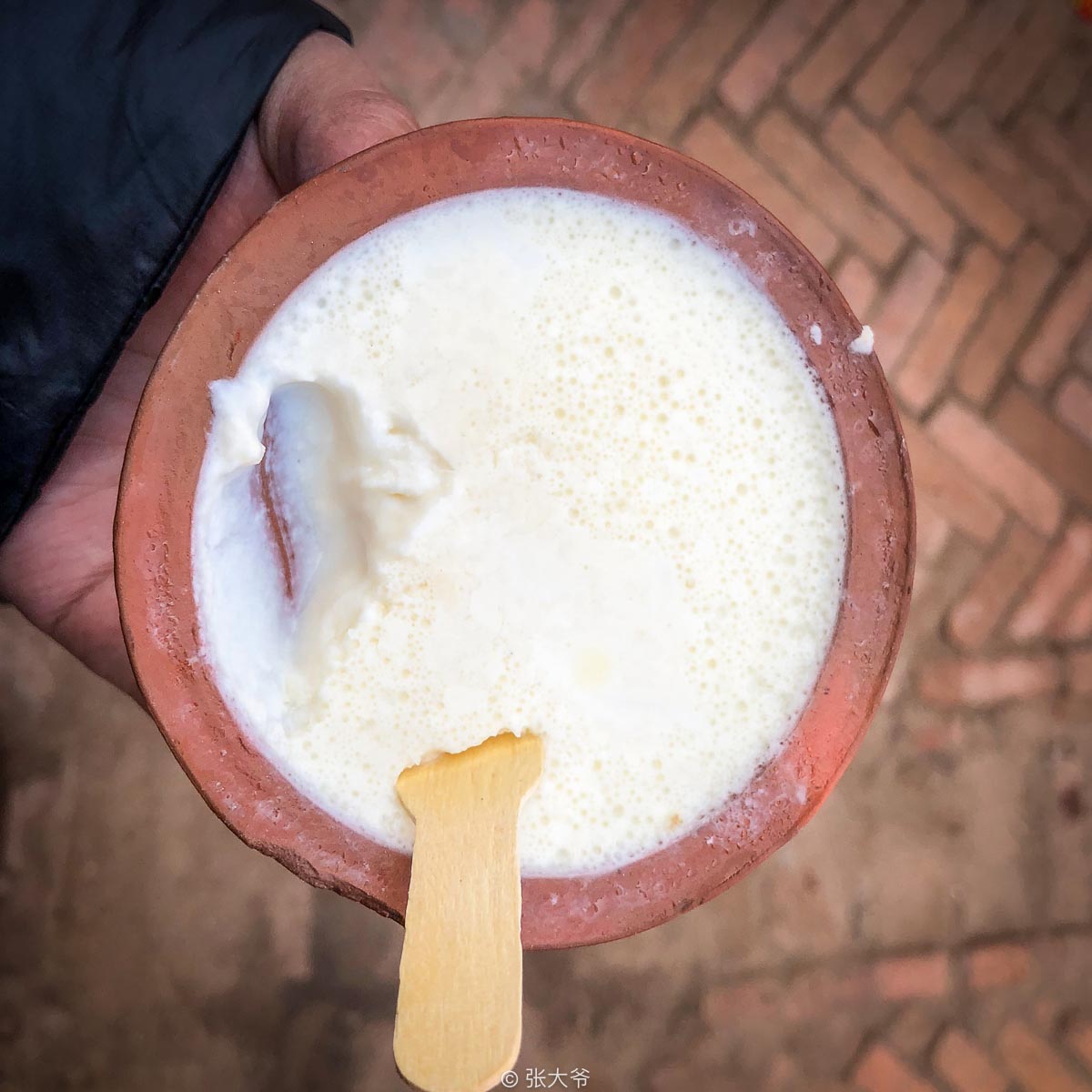 It is said that in the Mara Dynasty, the king asked people from Kathmandu, Patan and badgang to present their own yoghurt. The king tasted and evaluated the yoghurt of Badagong as the best.

Since then, Badagong yoghurt, which has become the king of yoghurt, has a great reputation in Nepal. Until now, it still enjoys a high position in the yogurt Market in Nepal. Therefore, all the foreigners who travel to and from here are attracted by their fame. They must taste this delicious snack and leave no regrets.

The tour guide led us to stop outside a humble shop. On the rectangular table at the door, there was a glass bound cover. There were rows of small ceramic bowls in the cover, which were the best yogurt in the guide's mouth.

Yogurt is not expensive. It's only 100 rupees. Kyle and I took the small pottery bowl and we couldn't wait to dig a piece into our mouth. The strong milk fragrance immediately filled the whole mouth, smooth and sweet, like the domestic Cantonese dessert - double skin milk.

A small bowl of yogurt for me to solve a few mouthfuls, I still have to sigh: "it's really delicious! I didn't expect that Nepalese people could eat such delicate desserts hundreds of years ago. It's amazing... "

The guide said with a smile, "you know? This yoghurt is made from buffalo milk. Ordinary cow milk is not allowed. Only buffalo milk can make this taste! "

I asked the guide, "do you want to recycle the small pottery bowl after yogurt?"

I turned to look at it and found that there were already broken pottery bowls in the hill. I felt it was a pity that they had been broken, so I cleaned them up to be used as a souvenir.

Seeing this, the guide said with a smile, "have you seen the water margin in China?"

"Of course, what's the matter?" I asked in surprise.

The tour guide immediately raised his arm and made a downward chop. While doing it, he said, "it's not pleasant to throw it on the ground and smash it like a person who has finished drinking."

After listening to this suggestion, I was immediately amused by him, and I quickly responded: "ha ha ha Come on Forget it... " There are so many souvenirs in the pottery square that I don't buy, but I'm willing to leave such a small piece of junk. Although I'm self-conscious, I'm willing to!

After leaving the yogurt store, the tour guide was not busy checking out with us. He took us everywhere in the alley and said that he would take us to have a good experience of the life of Degang people. Soon he said he would go to the toilet, but Badagong had no public toilets, so he took us into a shop selling bowls and bowls.

After entering the store, the owner of the pot bowl shop warmly welcomed him. The guide said to us with a smile, "they are all friends. These bowls and bowls are all made of pure copper by hand."

I looked around curiously, big and small pots and bowls filled the whole room, small as a bowl, big as a water tank. The guide picked up a bowl hammer and rubbed it on the nearest bowl

"Listen Sanskrit... " The guide closed his eyes as he spoke.

When the Sanskrit became weak, the guide opened his eyes again and said, "how about..."

The guide also nodded, touched the bowl that had been hammered and said, "well, cheap..."

I seem to understand the meaning of the guide, and Kyle looked at each other, tentatively asked: "mm-hmm, ha ha How much is this

The tour guide held out two fingers, staring at me with his eyes straight at me and said, "20000 yuan, person's name coin..."

After listening to the price, I almost didn't startle my chin. I nodded and replied, "mm-hmm, good stuff Ha ha Ha .”

The guide's eyes on me did not leave. He thought I wanted to buy, but I was just polite. Suddenly feel time seems to solidify in general, the atmosphere is slightly embarrassed. Sure enough, this is the Chinese tour guide style

Kyle saw this and quickly asked the guide, "aren't you going to the bathroom?"

"Oh Ha ha You don't say I forgot... " The tour guide made a ha ha, and walked towards the toilet. Kyle and I had been waiting outside the store before he could finish

Soon, he came out of the store, and we realized that he should not have wanted to check out. Next, we took us to Badagong, visited Thangka shop, oil painting shop, Vajra Bodhi shop, wool scarf shop, etc., which really let us see a lot, but Kyle and I are like two iron roosters, and we haven't pulled a hair

Tired at last, the guide took us back to Duba square and sat down on the porch opposite the palace and looked up at the sky. He finally remembered that he still had wages to settle with us. I handed him the prepared 2000 rupees, and the paper money flew quickly in his hand. It can be seen that it is the Chinese way!

A moment later, the tour guide put the money into his pocket, but he held out his hand to Kyle

Kyle and I were surprised and asked, "what does that mean?"

After listening to him, I was so angry that I came up. I thought how much time this guy spent in China. I didn't learn the good things. How could I learn all the bad things

I asked him in a choking voice, "is the routine you played with us a little redundant?"

The tour guide quibbled: "we could have had a good talk at the beginning..."

I immediately responded, "it's a good negotiation. It's two thousand, not two thousand for one person."

When I heard that I wanted to find the police, I felt that the tour guide was a little flustered. He softened his tone and said slowly, "look, I've taken you around for hours. If it's in the peak season, it's not only a little money, but also 3000 rupees..."

I said angrily, "unfortunately, it's not the peak season now! Sorry, we have no money in our pockets... "

Maybe Kyle is tired too. He pulls me aside and talks with me quietly. There must be no end to picking up the skin with him again. Seeing that the local people's life is not easy, we can only give him another 500, just to meet the local tipping habit. If he wants more, he won't be bothered to argue with him any more. He will call the police directly

After discussion, I went back and gave the tour guide an ultimatum. I said, "we can give you another 500 rupees. If we do, we'll call the police. We won't talk to you anymore!"

The tour guide put on a pretentious sigh and said in a conciliatory tone: "ah ok Five hundred, five hundred! It's really good for you to pick up your stool... "

After listening to him, I was angry again. I thought, is this TMD still a Nepalese? I resisted choking him, then threw him 500 rupees and left quickly.

Kyle and I looked at each other with a smile, nodded and said, "well It makes sense Ha ha ha... "