Wander outside reality door ZDY ' LOVE
now you really got Travel to Nepal (6) : Bhaktapur
Use love to fantasize... 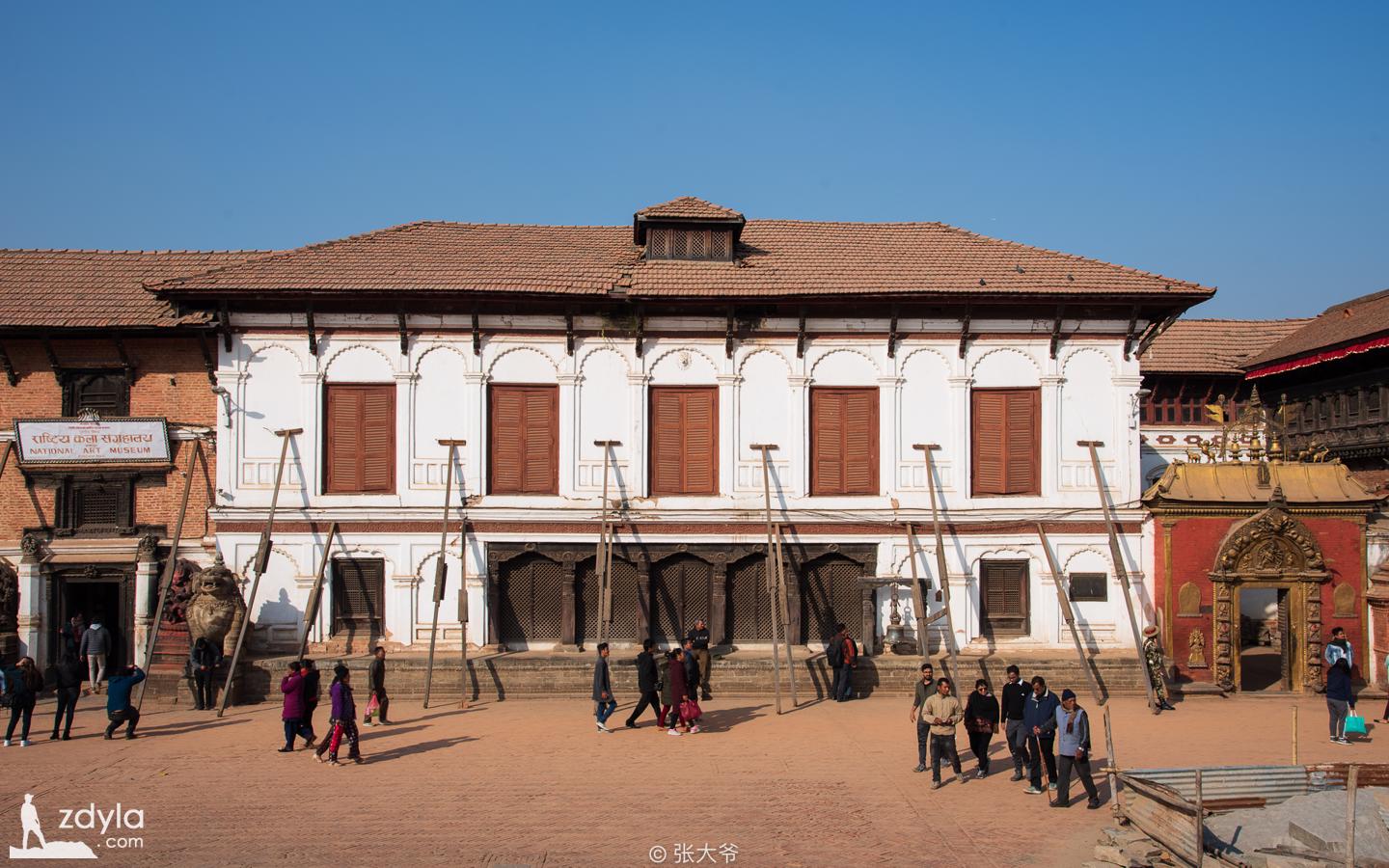 As the third largest city in Kathmandu Valley, the architecture of Badagong has the most medieval temperament. In Nepali language, it means "city of rice" or "city of devout people".

Because the Nepalese merchants at that time purchased wool, medicinal materials, salt from Tibet, or the best handicrafts from the Middle East and Europe, they would stay and rest in Badagong for a period of time. It was at that time that the great wealth brought by the business travelers finally brought about the golden age of the Nepalese Dynasty and the magnificent Badagong complex that people can see today.

Unlike the Duba square in Kathmandu, Badagong's Square is slightly spacious and clean, with no hawkers or pigeons. There are many ancient buildings and temples around the square, including the palace, courtyards, temples, statues and other artistic features, known as "the essence and treasure house of Nepal art in the Middle Ages".

Among them, the most remarkable building is the Mara palace with a history of more than 500 years.

The main entrance to the palace, called the golden gate, was built in 1754 and was the work of ranajit Mara, the last king of badgang. Compared with the surrounding buildings, the golden gate is a little short, but its beautiful shape and noble temperament are so attractive.

The door frame, lintel and decoration of the golden gate are all gilded copper, and the surface is full of Hindu gods. Above the lintel is a statue of a golden winged bird. It is said that it can drive away poisonous snakes and protect the palace. The statue below is a four headed and ten armed statue of talaizhu, the patron saint of the Mara Dynasty. The magnificent statues not only have a strong religious and artistic flavor, but also can be called the essence of Nepalese bronze carving art.

Before entering the golden gate, you will first pass a stone pillar standing a few meters in front of the door. There is a statue of a figure above the stone pillar. Sitting cross legged on a lotus pillar, hands folded and facing the golden gate, the statue is bhuttingdra Mara, one of the most famous kings of the Mara Dynasty. Many important buildings in the 17th century were ordered to be built by him, which made outstanding contributions to the development of local culture and art. This stone pillar is the only king stone pillar left in the Kathmandu Valley. The other two pillars, located in the Duba square in Kathmandu and Patan, have been destroyed in the earthquake.

Through the golden gate, you can see a square courtyard in front of you. There are several armed guards standing in the courtyard, which indicates that this is a very important place. In addition to this courtyard, there are 98 palaces in the Royal Palace, including the king's bedroom, Moore's court, Mohan court, Chuncheng tower, auspicious goddess's amusement palace, etc. even the similar buildings in the hanumandoka palace in Kathmandu are mostly modeled on this palace, which shows its high artistic value. Among them, the most famous is the "55 window Palace".

The 55 window palace was first built in 1427 and then expanded in the 17th century by King bupatingdera Mara. It is a four story brick and wood structure building. It is named because it has 55 black lacquer sandalwood carved flower and wood windows. At that time, the king was very fond of architectural art. In addition to ordering the construction of many skillful palaces and temples, he was also willing to do good deeds. It is said that among the 55 windows of the 55 window palace, there are works carved by the king himself.

These windows are of different sizes and shapes. The window lattice is decorated with precious stones and carved flowers. The exquisite patterns fully show the exquisite wood carving technology of the Mala Dynasty, which can also be called the essence of Nepal's wood carving art.

Through several doors, we came to a very special place, this is a palace pool called Naga pokhari, which is said to be the place where the goddess of taleju performed the bathing ceremony. The pool is made of stone and engraved with Hindu statues. The pool is several feet deep and has several steps. It is a large rectangular pool. There are several similar open-air pools in Badagong, where local people take water. They are usually built near temples to help people clean themselves before worship. 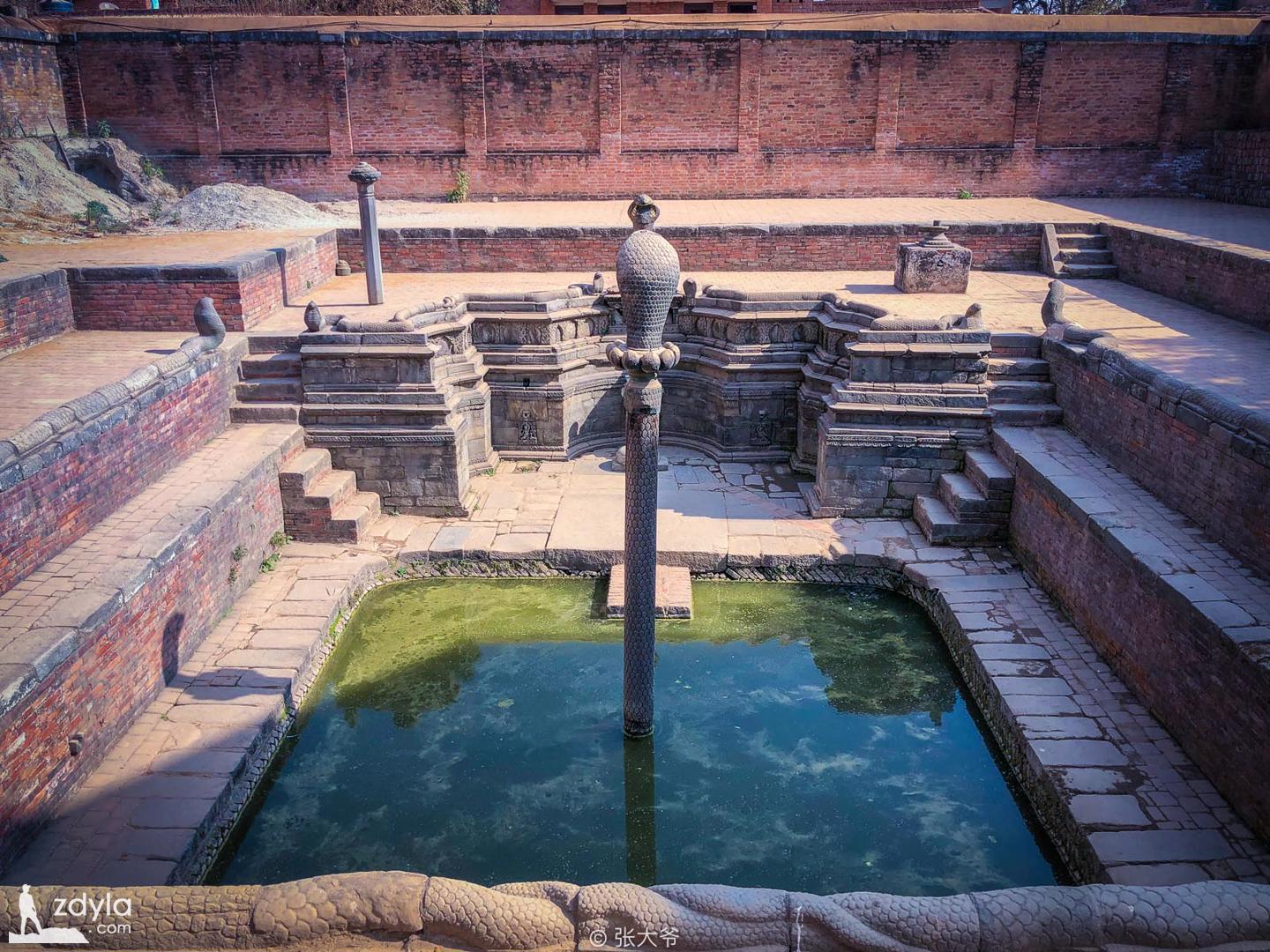 The Naga pool was used by the royal family and thus became the most ornate pool in badagon. Several cobras surrounded the pool. All of them were carved out of stone. They held their heads high and looked at the front, protecting the people in the pool like guards.

There is also a larger Cobra at the head of the pool. It's different from the other cobras that lie in the same place. Its chest is higher, reflecting a cobra stone pillar in the pool. Because the snake body is made of copper, it can withstand the wind and rain erosion more than the stone sculpture, so it looks lifelike. 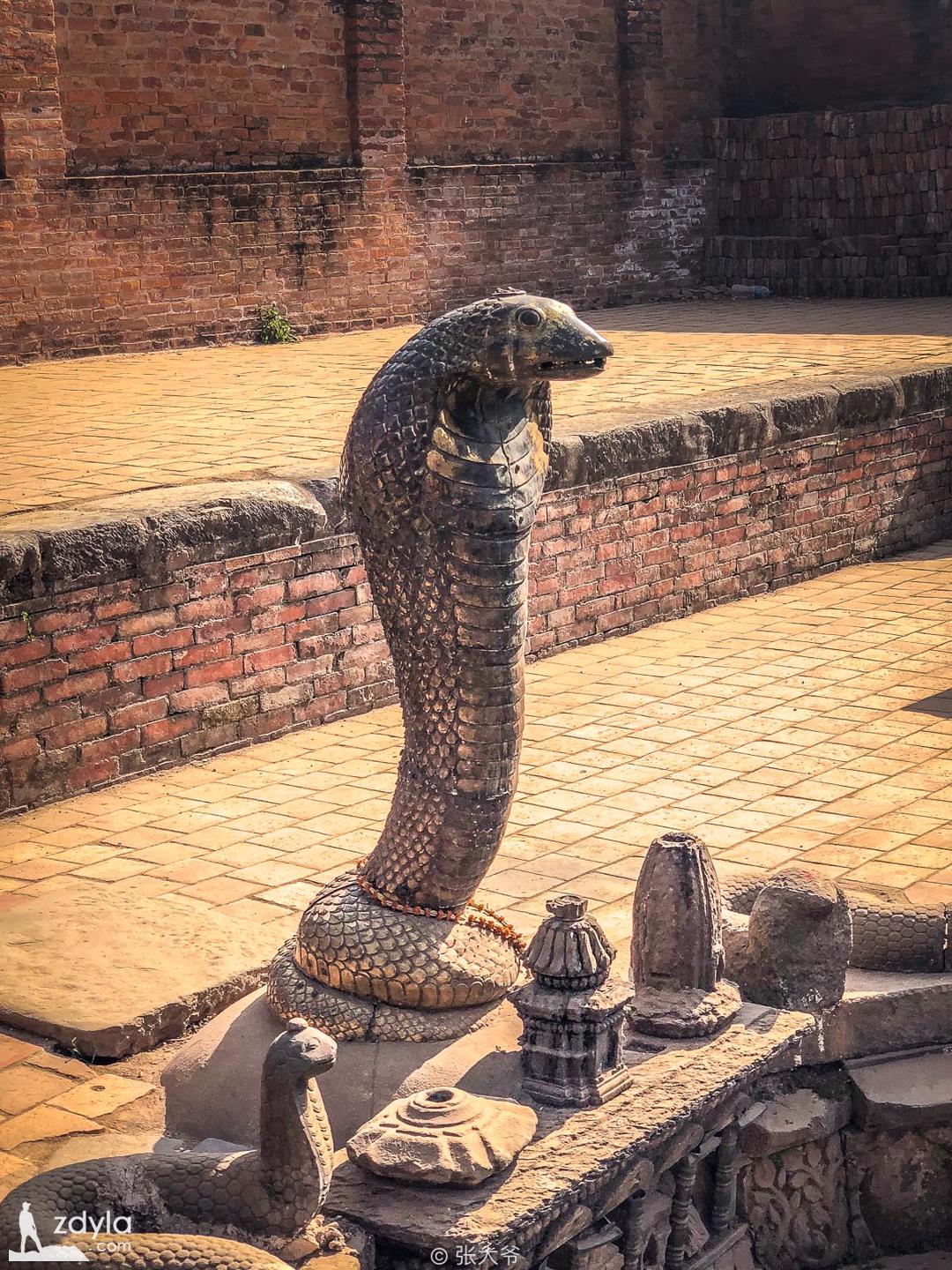 Several miniature tower carvings are placed in front of the snake's belly, which makes the snake's body look very tall. It can be imagined that when people stand in the pool and look up, they will be immediately covered by a terrible and powerful pressure, so they are in awe, just like seeing the gods 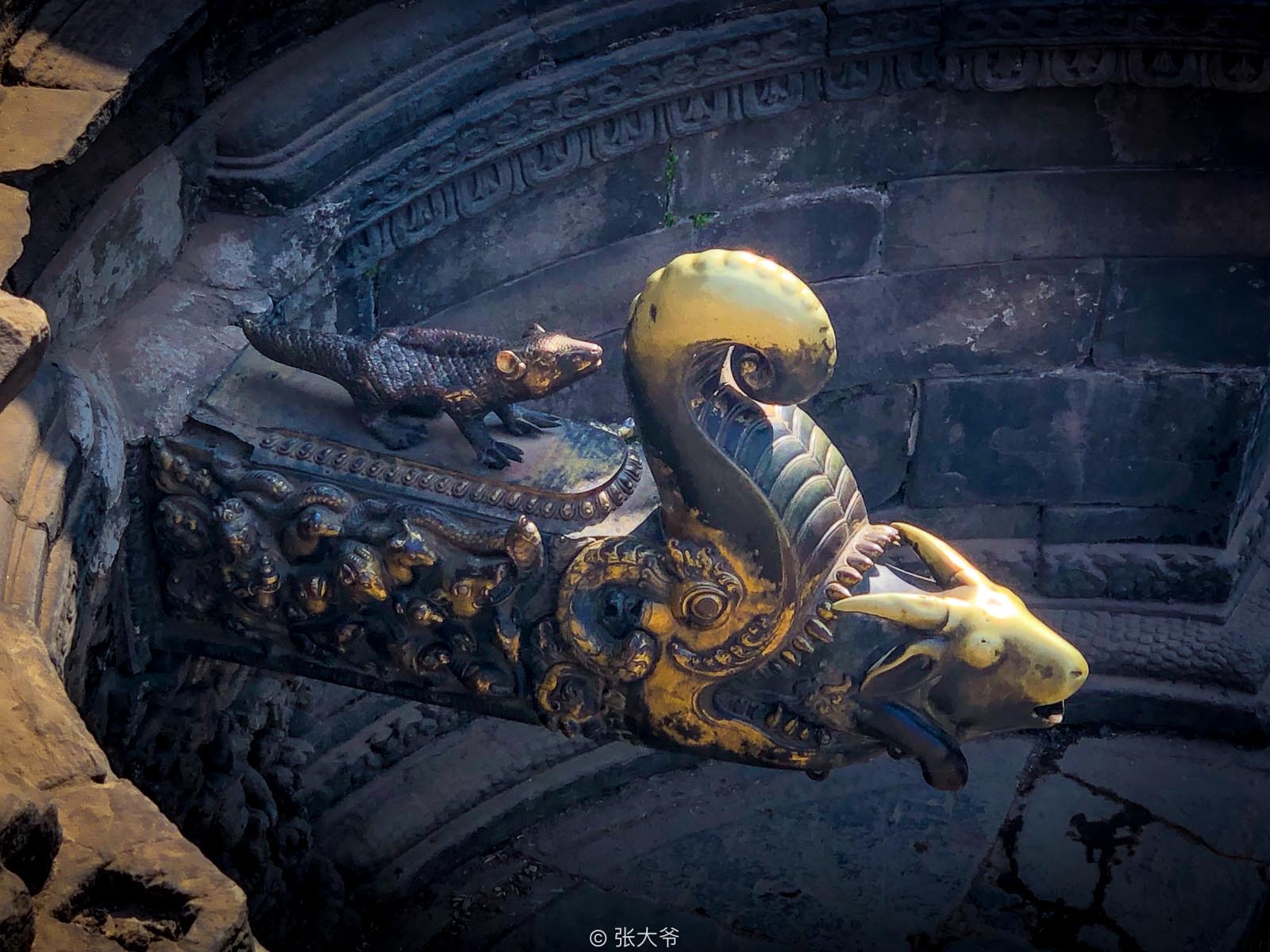 Under the cobra, a huge copper faucet comes out of the stone. The faucet is strange in shape, like a crocodile's head, with an elephant's trunk, and spitting out a goat's head from a bloody mouth! The neck of the faucet is carved with countless running monsters, which can not help but remind me that the goat in the mouth of crocodile is not the first running out of the monster? Clean water flows from the mouth of goat head, and sewage flows out from the stone trough beside the pool. It's really convenient and hygienic!

Some of the palaces in the palace are open to tourists at some specific time. Unfortunately, I didn't get such an opportunity. After visiting, we walked out of the golden gate and looked back at the patterns of the 55 window palaces. We could not help but traverse the past one by one to see if they were really different!

In addition, there is a scene in Badagong city which is equally famous for its wood carving technology and artistic value. That is the famous "peacock window", which is a carved wooden window in the 15th century. We walked through the labyrinth of alleys next to the palace, and finally found it on the wall of bugali monastery in the lane of datatraya. 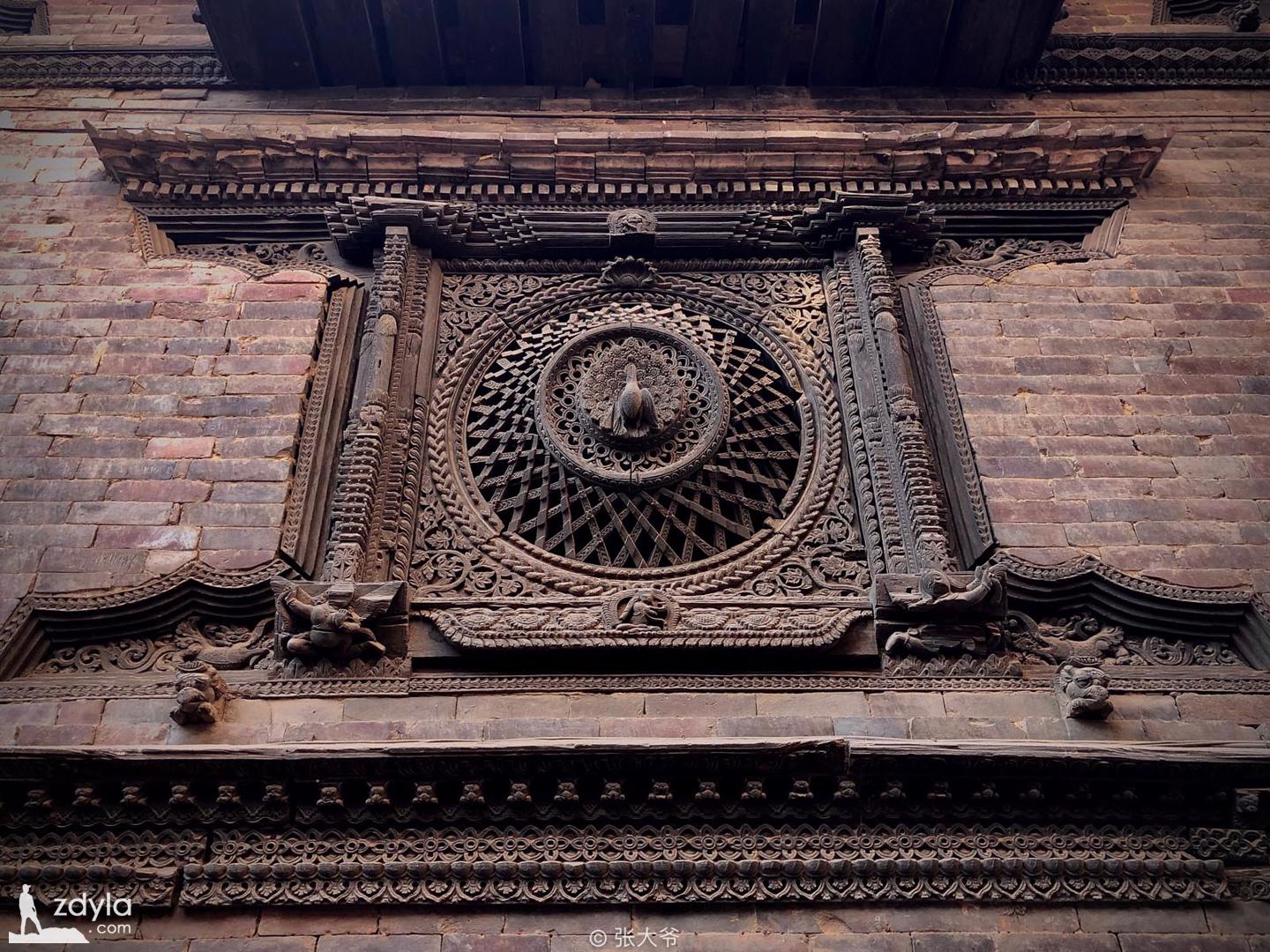 Peacock window position is slightly higher, you need to look up, if you board the attic opposite the window, you can look at it horizontally. In the square pane, a peacock with open screen is carved. Except for feathers, the whole bird body floats in the air, as if flying out of a painting. Such wonderful structures and exquisite carving make this peacock vivid. Even the pigeons, gods and shallow flowers around are carved with incomparable delicacy

The peacock window brings Nepal's woodcarving craft and artistic aesthetics to the extreme. Such exquisite and historic works can be regarded as the quintessence of Nepal.

Wood carving is a combination of the painstaking efforts of Nepalese craftsmen. These works of art describe the outstanding architectural and artistic talents of Nepalese craftsmen for centuries. Along with the traditional skills of several centuries, only a drop in the ocean is displayed in Badagong city. Only when you are in the scene, can you express this feeling with your naked eyes and fingertips