Wander outside reality door ZDY ' LOVE
now you really got Travel to Nepal (4) : Encounter the goddess Kumari
Use love to fantasize... 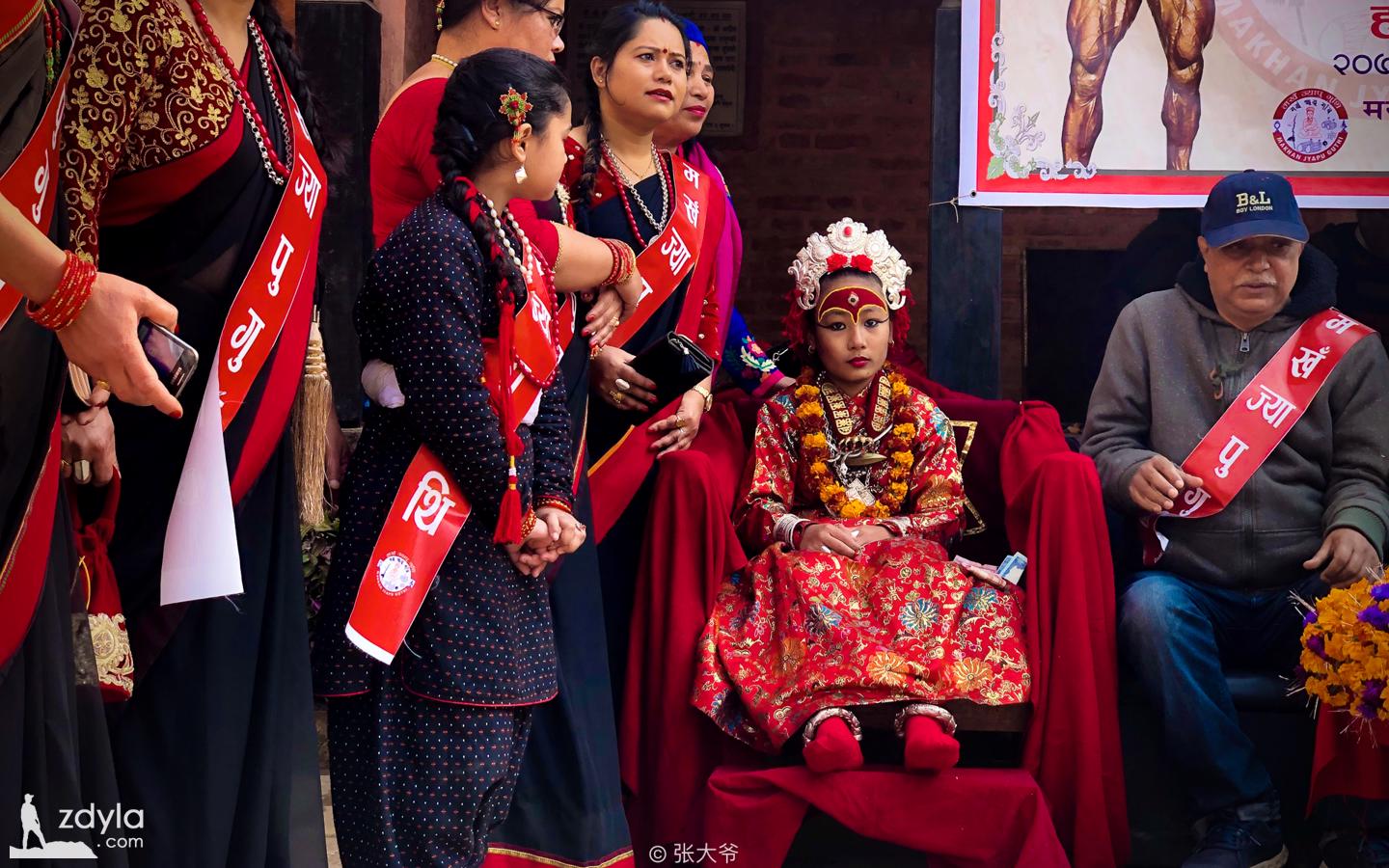 Standing on the viewing platform of the Monkey Temple, holding the railing in my hand, I tried to look further away. I saw a group of ancient buildings which were different from the surrounding square dwellings. I guess it was the Duba square!

There is a tall tower in the ancient buildings, which stands out from the others. Is it not the temple of the goddess of taleju? Since 1564, Nepalese people have believed that the 35 meter high temple of taleju is the tallest building in the world. If a building is higher than it, it will lead to bad luck, and this belief affects a large number of Nepalese people to this day.

The scale of talaizhu goddess temple is spectacular, which has the unique gorgeous style of Nepalese architecture. The most amazing thing is that the temple still stands after the 2015 earthquake and countless aftershocks, while the main landmark temple and the old palace near the square collapsed to varying degrees. Such architectural achievements alone can be regarded as a miracle.

The temple of the goddess of taleju is only opened once a year on the festival of Dharma, so when I go there, I can only regret being blocked out of the gate. 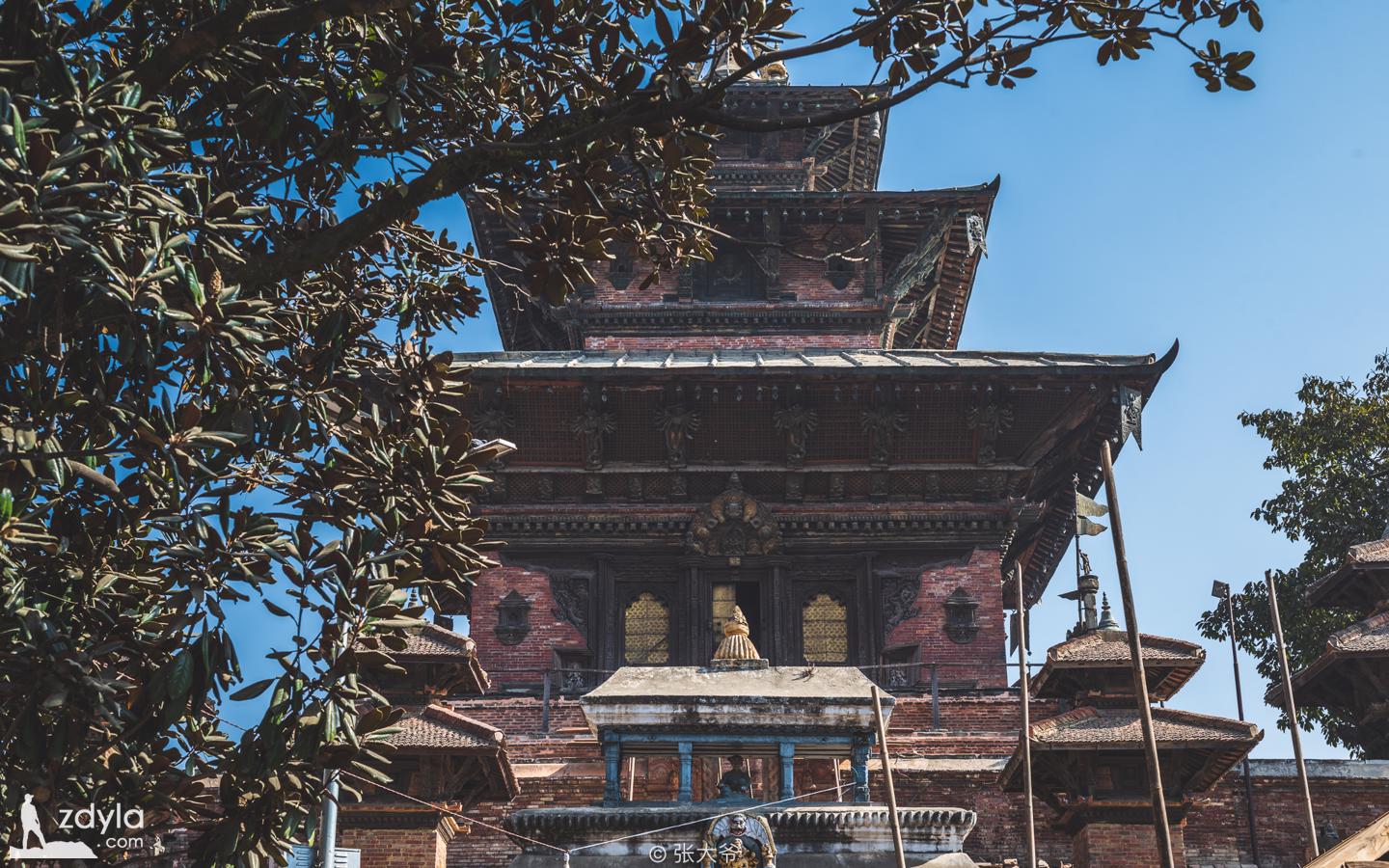 It is said that the temple was built on a 12 storey high platform, of which the eighth floor is the widest, with a low wall built inside and outside of which there are 16 exquisite small temples with double eaves and golden roofs. On both sides of the stone steps above the eighth floor, there are stone carvings of lions, monsters and Hercules. The goddess temple on the platform has entrances on all sides. The main gate facing south is the golden gate, and the goddess taleju is in the middle of the semicircular lintel above the golden gate. This multi handed goddess has a dignified appearance and a strong figure. She holds a variety of weapons, such as sword, halberd, stick and ring. The west facing gate under the platform is a cylindrical arch, which is covered with colorful sculpture ornaments such as holy water pot, crocodile, Panlong and flowers. The third roof eaves of the temple are all covered with gold-plated copper tiles. Under the eaves are rows of small copper bells, which flutter with the wind and make a pleasant sound from time to time. The four corners of the temple eaves are slightly upwarped. Under the eaves corners, there are hanging a bronze China curtain engraved with gods or a bronze altar symbolizing auspiciousness. The eaves of the temple are supported by rows of wooden pillars, which are carved with bright colored Hindu goddess statues. The top of the goddess temple is a gold-plated pagoda. In the center of the top is a slightly larger steeple with a small spire at each corner. On sunny days, the gilded roofs and copper eaves of the temple shine in the sun.

According to legend, the goddess taleju is the goddess believed by the king of Mara Dynasty, so the king should ask the goddess for advice when he runs the country. But one day the king angered the goddess and she left in a fit of anger. In order to save the goddess, the king sincerely apologized, and the goddess finally agreed to reappear in front of the king in the image of a little girl. This is "Kumari", which is known as the "living goddess".

"Kumari" means virgin in newali and living goddess in Nepali. In Hinduism, she is the incarnation of the goddess nanjinmu in the human world. Nanjinmu is one of the incarnations of Parvati, the wife of Shiva, the main god worshipped by sexists and the Dharma protector in Buddhism.

Today, the goddess Kumari is still selected according to strict rules. The girls must come from the Sakyamuni class, be between three and seven years old, and must be physically intact. In accordance with the 32 requirements, the girls must be consistent with the king's chart.

Once a girl is chosen as a goddess, she is asked to leave her original living environment and live in a temple specially prepared for her. However, once her body is injured or the menarche comes, her term of office will end.

Kumari palace is the resting place of living goddess. The palace is a typical Nepalese building with red brick walls. Kumari meets people every day, and she appears almost always in the wooden window in the middle of the stairs.

When I saw the goddess, I was not in the palace, but in the open air

I remember that before going to the Monkey Temple, a grand ceremony was being held in Duba square. Wandering around, I didn't notice this new thing nearby, only vaguely heard the waves of primitive Nepalese music floating nearby. I feel the music has drums, and Xiao, although the rhythm is slow, but can feel the happy melody

Driven by curiosity, I unconsciously approached the source of music. Walking two or three blocks, I saw a Hindu temple I couldn't name. The local people surrounded the temple inside and outside, and I found that they seemed to be preparing something

The wall of the temple yard is not high. I stood outside the wall and looked inside the courtyard. A group of red flames caught my eyes at once! This group of Nepalese women in red costumes and red flowers are as beautiful as lotus leaves growing in the dry land and butterflies flying out of the desert. Maybe only by seeing them with their own eyes can they truly feel their beauty 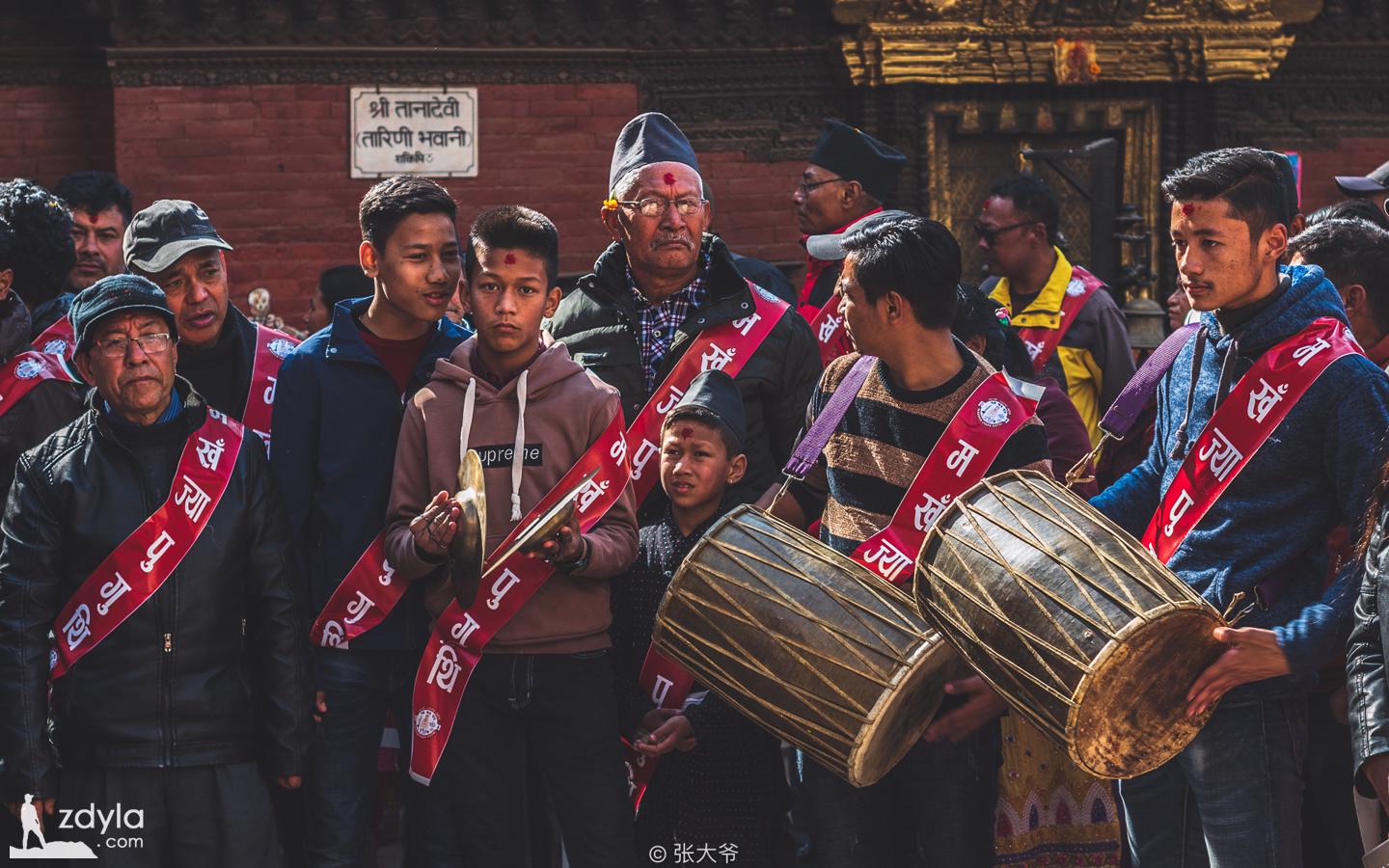 She wore a gorgeous silver crown, which was not only inlaid with a huge ruby, but also decorated with a number of red flowers. Under the silver crown and eye level side, there are two marigold symbols of luck and happiness, and the neck is surrounded by two large strings of marigold necklace.

She was sitting quietly in her red dress. Her eyes were haughty and her face was expressionless. She never smiles at people. It is said that once she smiles, it means misfortune and death. At this moment, I finally realized that she was Kumari, the woman regarded as "God".

I saw many foreigners' faces in the temple, and the kind Nepalese did not drive them away, which encouraged me to go in. I walked around the red carpet and approached Kumari, peeping curiously from the front, side and back without disturbing her.

The goddess in my eyes doesn't seem so magical! I can't see the clouds under her feet, nor can I see the brilliance of her body. I can only see a thin flower girl and a pair of imprisoned feet

At that time, the temple door suddenly boiling, a dark skin of a strong adult was surrounded by the crowd into the red carpet. His eyebrows were ablaze with cinnabar, and a large string of marigold hung around his neck. In addition, there is a golden hada, which shows his noble status. He didn't seem to prepare a suit for himself, but only wore his daily coat and jeans, but this did not prevent him from releasing his dazzling aura 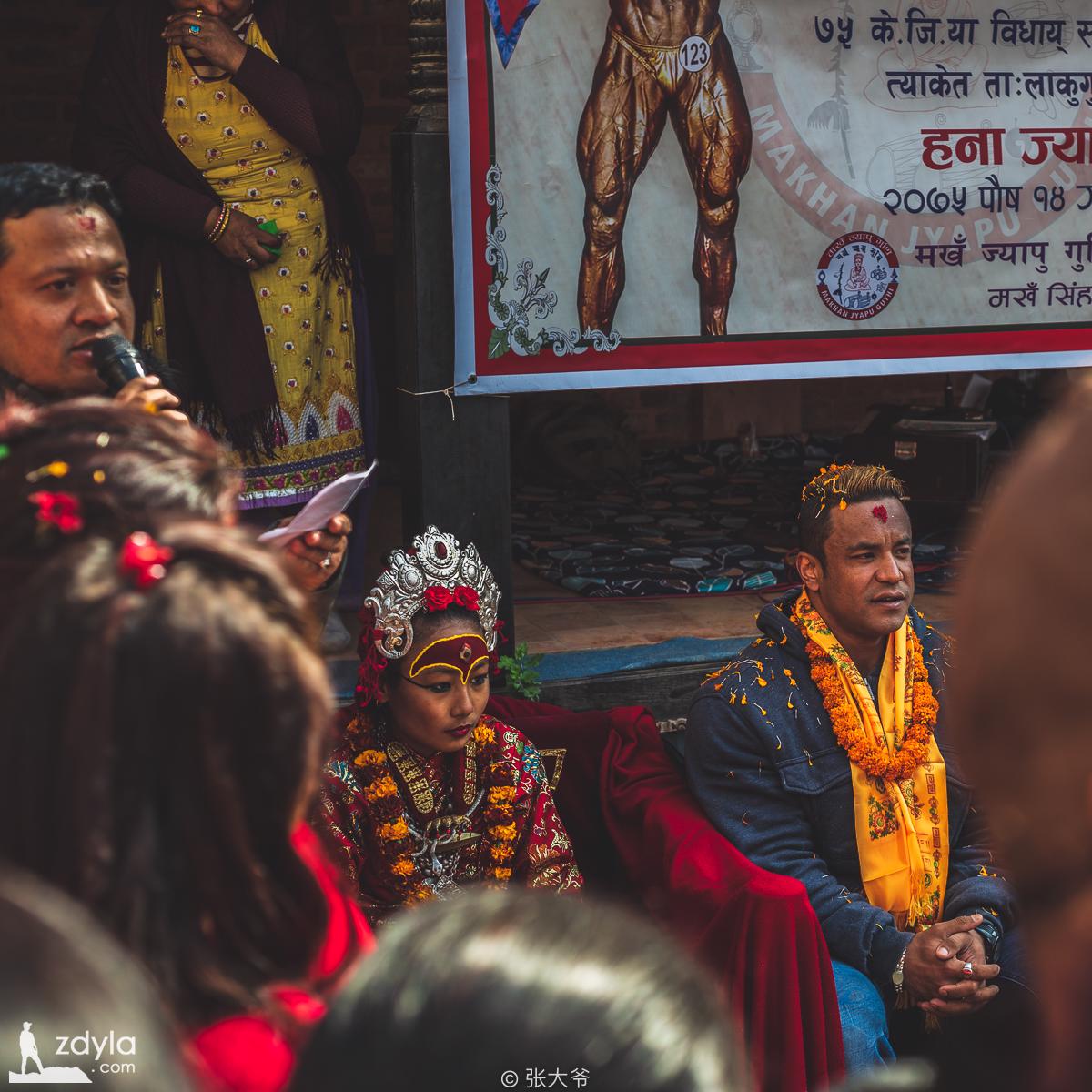 He stood on the steps at the gate of the temple, and everyone's eyes were focused on the strong man. The women in the red dress cheered, and the first woman presented a bunch of flowers for her, and the people around her clapped. He held the flowers and waved to everyone with a smile. Then he simply said something and went down the steps and walked inside on the red carpet.

At this moment, the temple once again boiling up, more enthusiastic than before, even the "background music" are submerged in cheers. The strong man walked in the red carpet, the women kept sprinkling petals on his head, the men vied to shake hands with him, and the long-standing elders in the red carpet threw wine into the air in front of him. He put his hands together and prayed with a devout bow.

At the end of the prayer, people made way for the red carpet in front of him. He walked to the goddess Kumari and knelt down. Libby, he sat on the chair next to the goddess, and shared the noble courtesy of God level with the goddess.

A host with a microphone stood next to the strong man, motioning for everyone to be quiet. Then every few words the host said would pause for a moment, and people would clap and cheer with tacit understanding. Although I can't understand what the host said, judging from his speech rhythm, it seems that he is introducing some achievements of the strong man

The whole process didn't last for a long time, but I felt that the strong man's butt seemed to be on pins and needles. When the host said "the end", his body jumped like a spring and immediately walked to the door without looking back

In an instant, the crowd scattered, and the temple yard became empty, leaving only the goddess and two or three old women taking pictures with the goddess. The goddess is still sitting there quietly, her eyes are calm as usual. No matter whether the environment is lively or not, whether her eyes are focused on her body, she just does not eat human fireworks and never has a trace of waves on her face. Perhaps, she has long been used to such occasions, used to people coming and going, tide ups and downs

I went back to Duba square and leaned on the steps in front of the temple like the Nepalese people around me, watching the flying pigeons and the children chasing the pigeons. I suddenly remembered whether the goddess Kumari had the same happiness and innocence as them 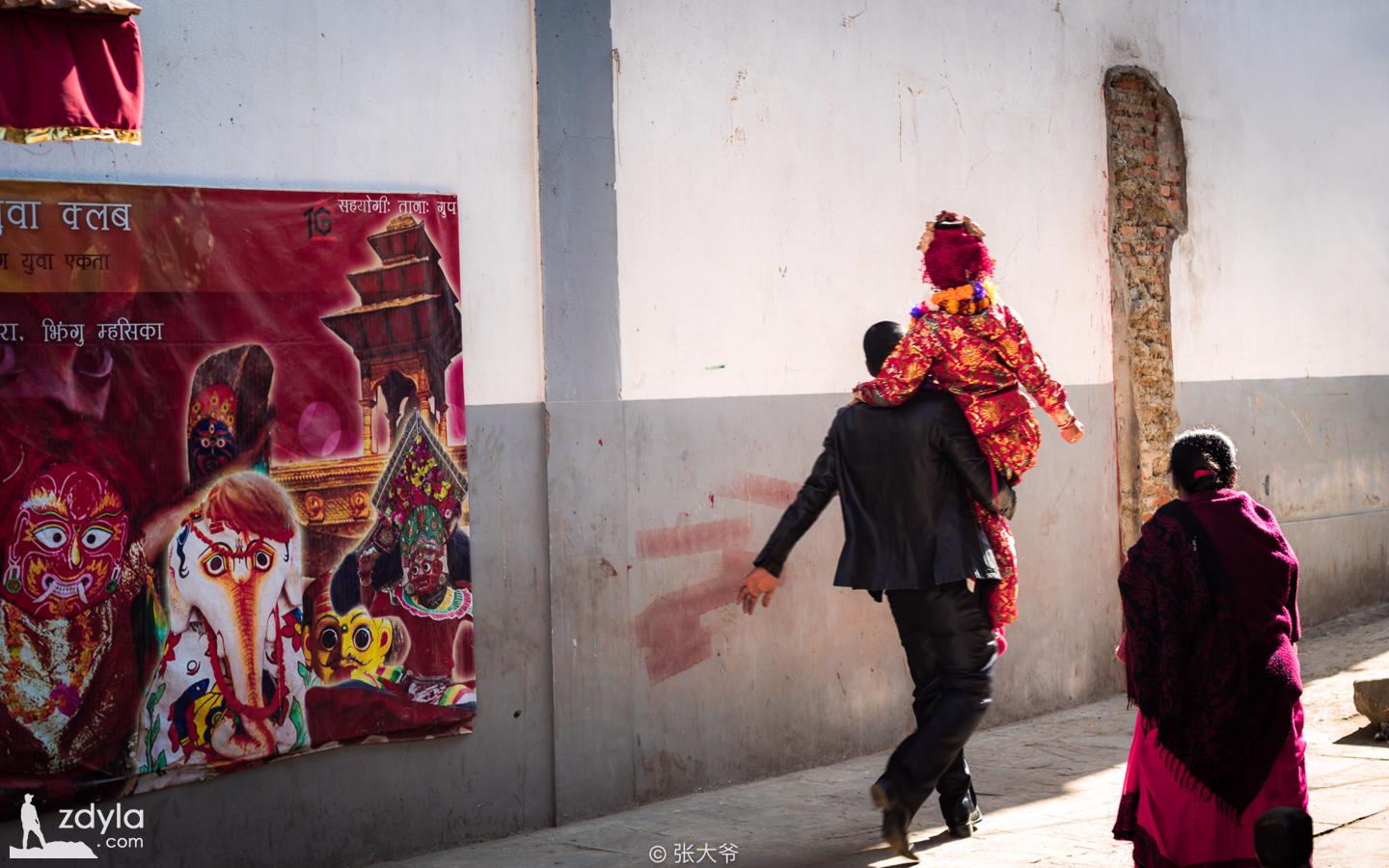 It is said that Nepal is a country with high happiness index. Nepalese people who are happy to know their destiny have long been used to spending a lot of time in the sunshine and searching for their true self in the world of gods and Buddhas. But where to find the true self of the goddess Kumari? Maybe, only she knows