Wander outside reality door ZDY ' LOVE
now you really got Travel to Nepal (3) : First visit to Kathmandu
Use love to fantasize... 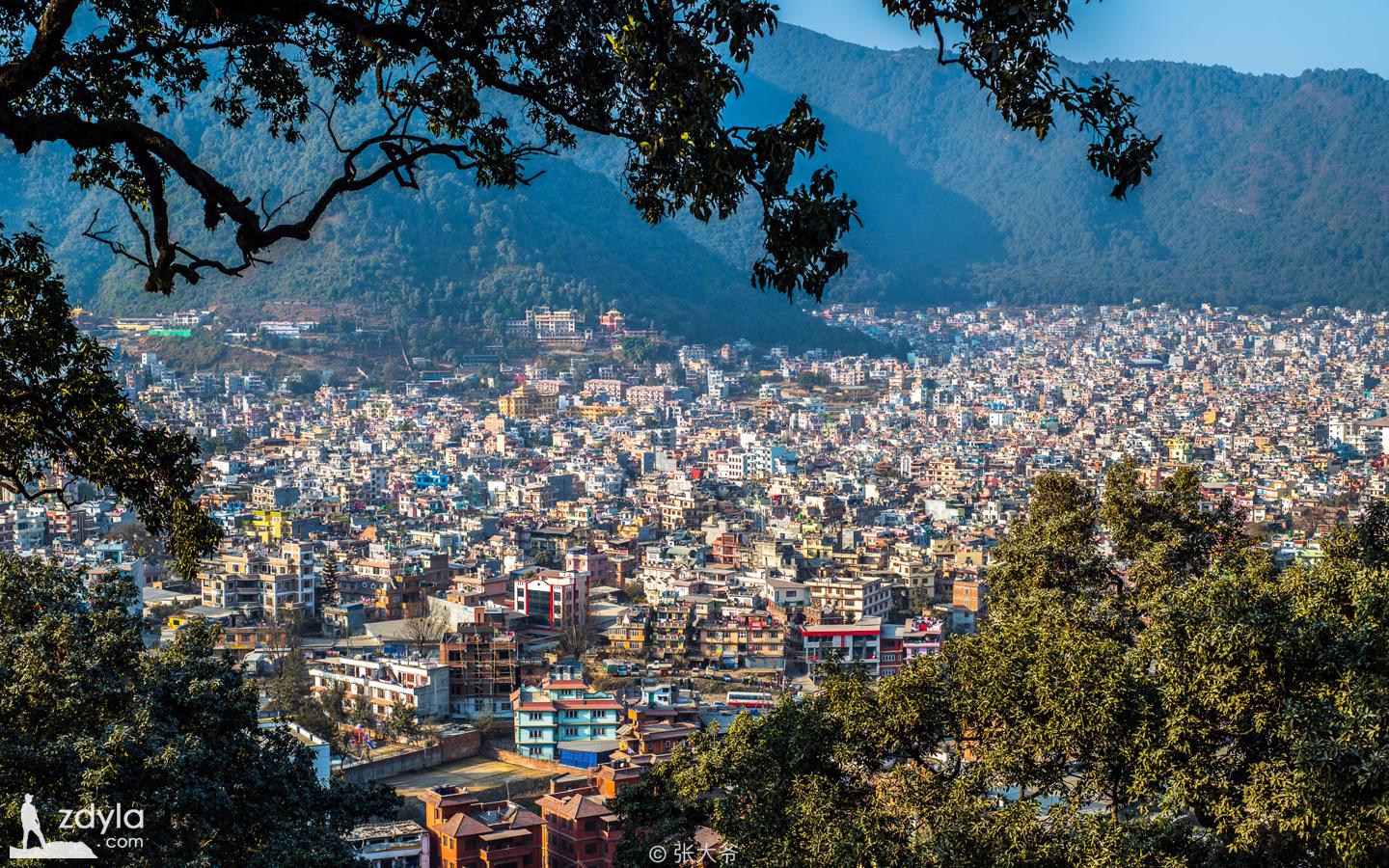 Tamil morning is quiet, in addition to bird calls, almost no sound can be heard, no one can see a person in the street, shops are still closed doors and windows, as if no one has ever been to the same, it is estimated that people are still sleeping in bed!

I was looking out of the window of the block in a daze, opposite the roof suddenly out of a bamboo pole, bamboo pole slowly extended upward, more and more long. Then, a dark Nepalese man jumped out of the roof. He raised the bamboo pole and waved it a few times. The next moment, several monkeys separated from each other

I can't help but smile at him! Unexpectedly, in this most prosperous city block in Nepal, there are monkeys inhabiting! But when I went to the Monkey Temple in the afternoon, I knew what it was

When I went to the Monkey Temple, I asked Xiao Hu. Xiao Hu is a friend I met in the Himalaya youth brigade. She is a very brave girl. She came to Nepal alone and planned to walk ABC! For this reason, let me form a small team with her, because I am also ready to walk ABC! It is for this reason that Kyle and I parted ways at the moment when we left Sichuan Hotel. Although hiking ABC is very desirable, Kyle does not have so much time to complete.

Xiao Hu and I almost fainted after following Google map. It took a lot of effort to find the Monkey Temple. In front of the Monkey Temple, I was surprised to look around. Between the stone steps on the hillside and the statues, groups of monkeys scattered as if no one was there. Each of them was lazy or lying or lying on his back, or lying or sitting, unscrupulous in the flow of people, which opened my eyes!

The original name of the Monkey Temple is swayambhanath, which is called "Monkey Temple" because there are a large number of wild monkeys in the temple. Over time, the official name is not known to the public.

The monkeys here fully fulfill a Chinese saying - there is no tiger in the mountain, the monkey is called overlord! It's because they are too arrogant that they actually snatched the cucumber from Xiao Hu's hand under my and Xiao Hu's eyelids! When I was robbed, Xiao Hu and I didn't react. Xiao Hu, who had no sense of precaution, was also scared and yelled! The smelly monkey who got the victory fruit rushed to the tree and lay down to taste it slowly. It was very funny and funny 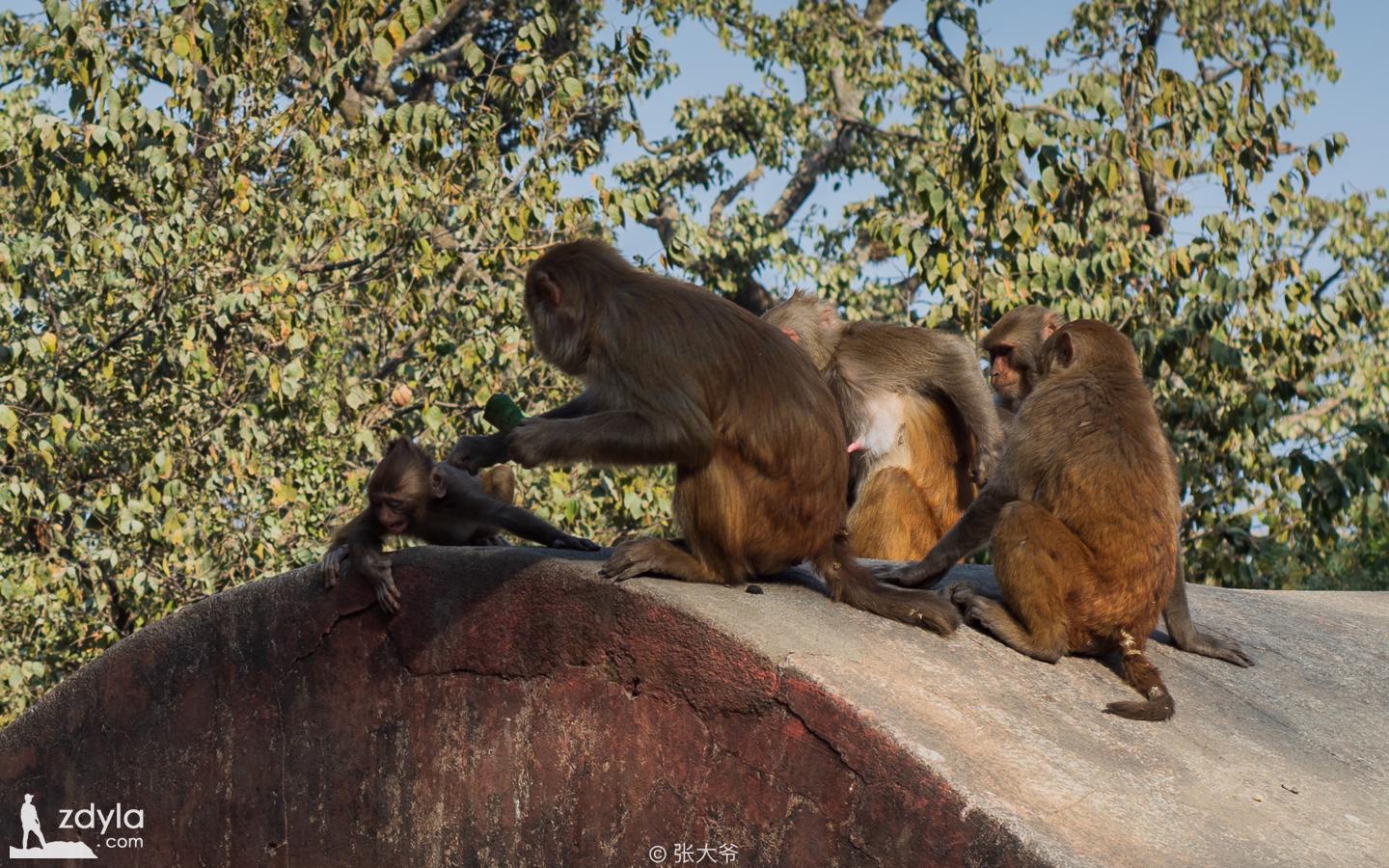 When we watched the monkey put the last cucumber in his mouth, we remembered that the Nepalese old man who sold cucumbers handed us cucumbers and murmured about things we didn't understand for a long time Originally, he is telling us to be careful of monkeys!

The most impressive one is the big eyes on the four sides of the cube base under the tower vertebrae. This is the "all seeing eyes" of the Buddha. It has a profound vision. It seems to have a constant insight into all things in the world and is full of infinite wisdom

The pagoda is also full of prayer flags that people offer when they wish to return their vows. The prayer flags are blown by the wind in the air. This can not help but remind me of "Tibetan Buddhism". There are different ways of doing the same thing.

However, the belief of Nepalese people does not seem to be confined to this. There is a beautiful Hindu goddess to the north of swayanbunat pagoda. She holds the right to bear children and is also a Dharma protector specializing in protecting children. Many Nepalese people specially bring their children here to worship. And around the scattered Hindu temples are also crowded, pilgrims in an endless stream, it seems that incense is very prosperous.

There is also a huge circular pool on one side of the pagoda group. In the middle of the pool is a golden statue of Sakyamuni. He steps on the lotus and floats quietly in the air, serving all beings who come to pray. The pool is surrounded by Nepalese people, who keep throwing coins into the air. May it fall on the lotus at the foot of the Buddha statue, so that the Buddha can bless and achieve his wish

The religious atmosphere here is strong and free, non aggression and integration. The believers of different faiths are peaceful and tolerant, and people and animals live in harmony. This is undoubtedly the most magical place in Nepal that I have experienced

In 2015, Nepal had a major earthquake with magnitude 8.1, with a focal depth of 20 km, and 265 aftershocks of magnitude 4 or above occurred within a month after the earthquake. As a result, the Monkey Temple, which has been standing for more than 2500 years, has not been spared. The ruins of the collapsed auxiliary tower are still visible. Fortunately, the main building is only slightly damaged. Today, although the temple is still in the process of restoration, pilgrims are still in an endless stream. Nepalese people who have experienced the disaster are still calm and optimistic. Perhaps their strong faith has made them happy

In view of the limited knowledge of Nepal, Xiao Hu and I visited the temple buildings like a horse's eye. The hopeless taste makes us more curious about the Nepalese handicrafts in the shops nearby. Although the paintings, scarves and pottery are not exquisite enough, they are full of Nepalese customs. What impresses me most is a string of "Vajra Bodhi" in the hands of Nepalese businessmen. I didn't expect that this kind of thing, which is only played by Chinese people, is full of shops of other countries due to the rise of tourism industry. It's not funny

At the end of our tour of the Monkey Temple, Hu and I wandered around to find the exit. With the flow of people, we inadvertently walked to the railing at the edge of the tower group. Surprisingly, we had a first-time view of the whole Kathmandu!

When you climb a high place and look far away, you can see the endless low houses, dense and overwhelming

Many Nepalese are sitting on the outer wall to take pictures. It seems that monkeys are not willing to be lonely, they squat between the crowd as if nothing happened, also want to keep their appearance, this scene is really a bit funny 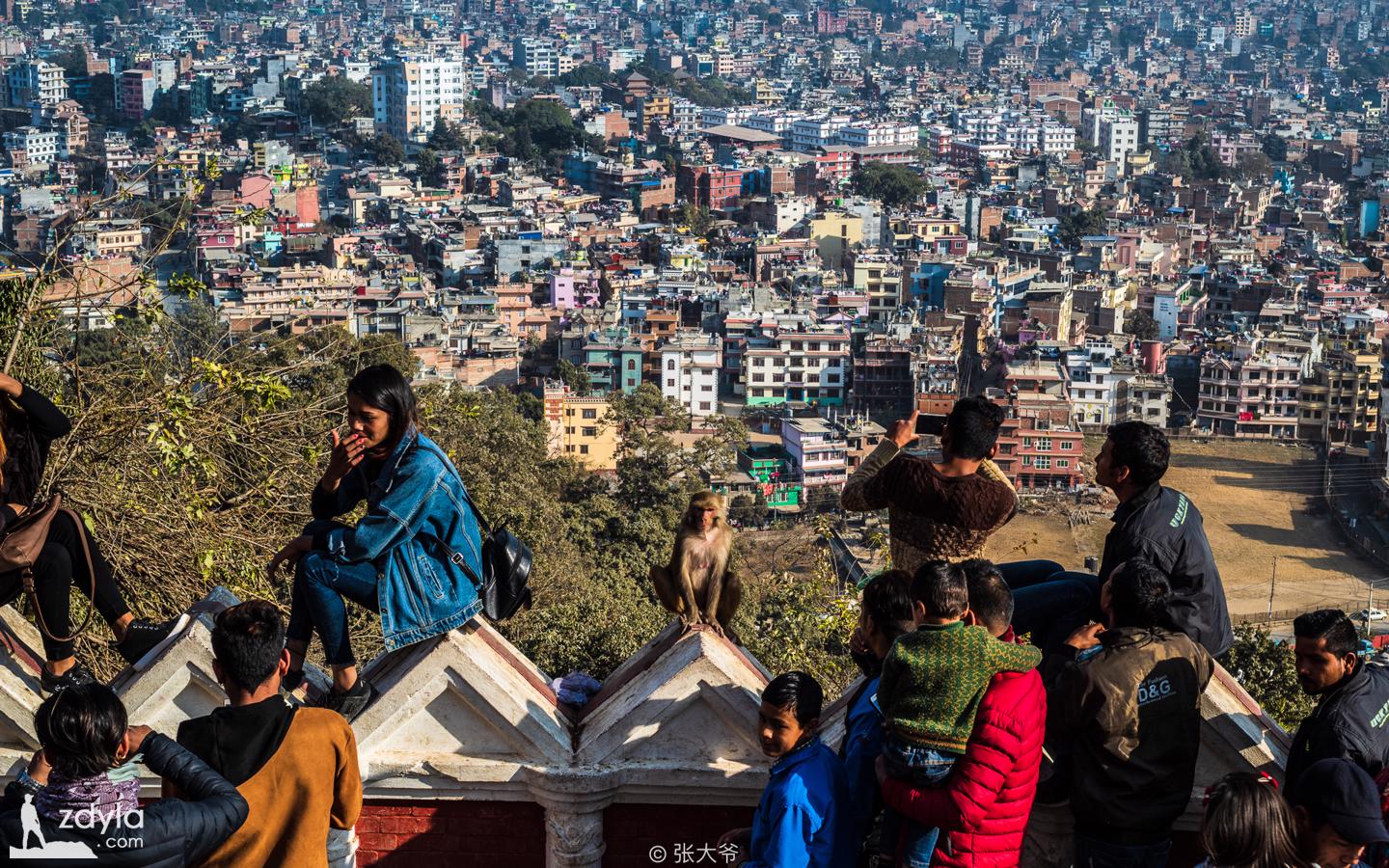 However, we are glad to find some hidden problems in the city!

Looking at the dust shrouded Kathmandu, I can not help but sigh: with a long history and splendid civilization, Kathmandu is not a "shining pearl"! But the degree of urbanization is seriously backward, infrastructure and service capacity can not meet the size of the urban population in Kathmandu, as the capital, there is indeed some "talent mismatch"