Wander outside reality door ZDY ' LOVE
now you really got Travel to Nepal (20) : Waiting for the wind to come
Use love to fantasize...

A long time ago, I heard that bocala is known as the paragliding capital, because there are the top three paragliding venues in the world! Since I came to this city, of course, I couldn't miss the opportunity. So, Xiao Hu and I made a reservation for paragliding in the travel agency.

Early in the morning, we went to the appointed place to play paragliding. Before departure, the people from the travel company said that there was still a group of people who would go up the mountain with us. They were all Chinese like us! I was very happy to meet my compatriots, but the travel agency asked us not to talk about the price of paragliding after meeting, which made me feel a bit uncomfortable

As they are domestic tour groups, the price of gliding service is quite different from ours! The front desk lady quietly told us that the price for each of them was 600 RMB, while ours was 5500 rupees, equivalent to 300 RMB, which was double the price we paid. However, this is only the price received by Nepal travel agency, and the amount of money charged by China travel agency may be more amazing!

After a while, two men and two women came from the travel agency's car, saying that they had come from Chengdu. Before they had said a few words, they were arranged to get on a jeep. Jeep is not big, but it pushed us, coach and driver 11 people! Two of the coaches were sitting on the co pilot's seat. They were really drunk

After driving for more than half an hour, I arrived at the top of salanko mountain. I was assigned to a Nepalese coach. He said hello to me very kindly. Then we exchanged names, shook hands and got to know each other!

There are many paragliders waiting to fly on the hillside, and my coach and I are standing on the hillside preparing to take off. A few girls were thrown to the ground when taking off because of their nervousness! The coach pointed to them and said, "this is bad, don't do that!" Of course, I replied calmly, "OK, OK!". I think I am so smart, how can I be so "cute" wrestling!

As he unfolded his paraglider, the coach told me: "at first, walk slowly, then speed up, and sit back at the moment of takeoff. Don't jump..." I nodded to show that I understood. It was too simple for me.

Finally it's our turn to take off! The coach tried his best to lay the paraglider on the ground. The paraglider was immediately extended by the wind, and we slowly went down the slope. Everything was going according to the agreed take-off process.

After walking about ten steps, I suddenly had an upward supporting force to lift my buttocks. I watched my feet leave the ground. But at this time, the wind direction changed. The paraglider lifted by the wind suddenly fell half way down. The supporting force on my buttocks disappeared. I sat on the ground quickly to avoid rolling down the mountain

The take-off failed. The coach said, "it's OK. Don't be nervous." Then, he unfolded his umbrella and took off for the second time. Unexpectedly, the situation just happened again, and then the third time, the same situation! This is how a trace, I can't help but a little nervous, thinking about this coach in the end? Don't fall in the sky

Then there was the fourth take-off, and I began to pay attention to the extent to which my paraglider was blown by the wind, and I deliberately adjusted my body even though the wind was going sideways. The paraglider was opened by the wind as usual. My coach and I started to move. After two or three seconds, the paraglider seemed to have strength and tried to rise upward. We hastened to speed up the pace, the umbrella from behind us suddenly moved to the top of the head, did not react, feet have gradually left the ground, and then come back to God, I have been flying in the air

We glided further and further away from the salanko mountains, and it was on the way to the shore of Lake Fava. Apart from flying, it was the first time that I felt the feeling of flying in the sky. My feet are getting farther and farther away from the ground, and the feeling that I have no place to exert myself makes me very nervous. I couldn't restrain the adrenaline secretion, gasping for breath

On the rise of the coach, he suddenly pulled the control rope on both sides of his body, and the paraglider was lifted up a lot. The sudden sense of weightlessness scared me to scream, and the coach controlled the glider to hover.

I yelled to the coach, "take a picture of me!" I thought, shoot well, get down quickly. But the coach did not hurry to say: "play a little more!" Then, he was operating the paraglider, hovering, gliding, up and down, which made me panic! After more than ten circles, he finally took out the camera to take pictures for me 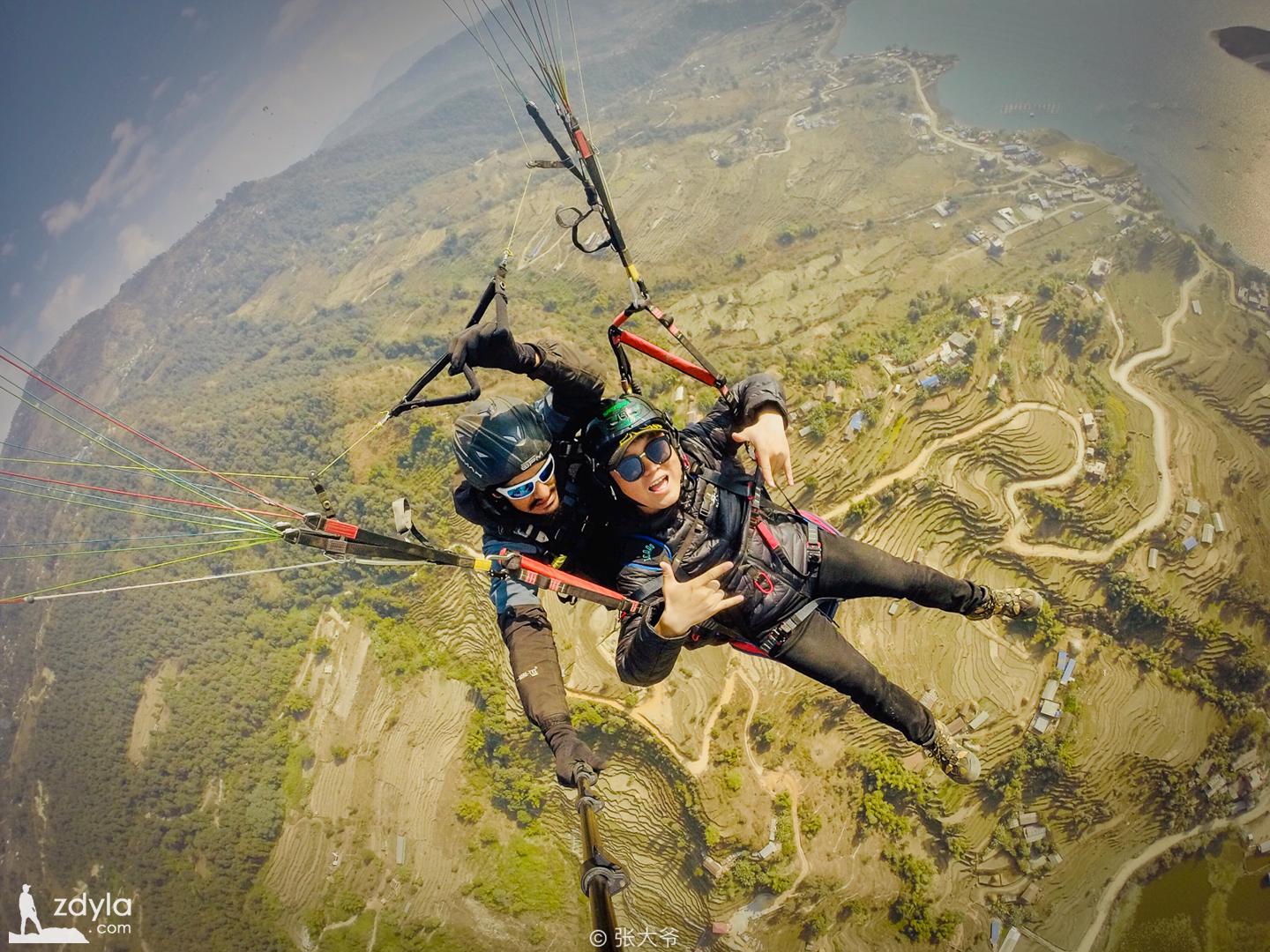 The camera is stretched out by the connecting rod one or two meters away from the body, which makes the photos more cool and beautiful. He symbolically taught me to use the camera directly to my hand, let me shoot myself! The moment I took the connecting rod, I didn't expect that my arm was so soft that I could hardly hold the camera. I almost let it fall down

Maybe I've been flying in the sky for a long time, and I feel a little bit used to it. I'm excited to hold my camera and play 360 degrees. But at this time, the coach began to play climbing again, and my heart, who had just adapted to it, suddenly pulled up again. I couldn't afford to take pictures any more. While holding on to the rope at the side of my body, I yelled: "no, no, no..."

Twenty minutes later, our paraglider was finally about to land on the plain near Lake Fava. At the moment of landing, I tried to make my legs not soft enough to sit on the ground. Fortunately, my legs won't make me embarrassed

After the experience of paragliding, I sat on the edge of Lake Fava, facing the beautiful lake. I was excited for a long time and could not calm down. I don't know when I will experience this feeling next time. I hope it won't be long