Wander outside reality door ZDY ' LOVE
now you really got Travel around Laigu glaciers and explore the most neglected world wonders on the Sichuan Tibet line
Use love to fantasize... 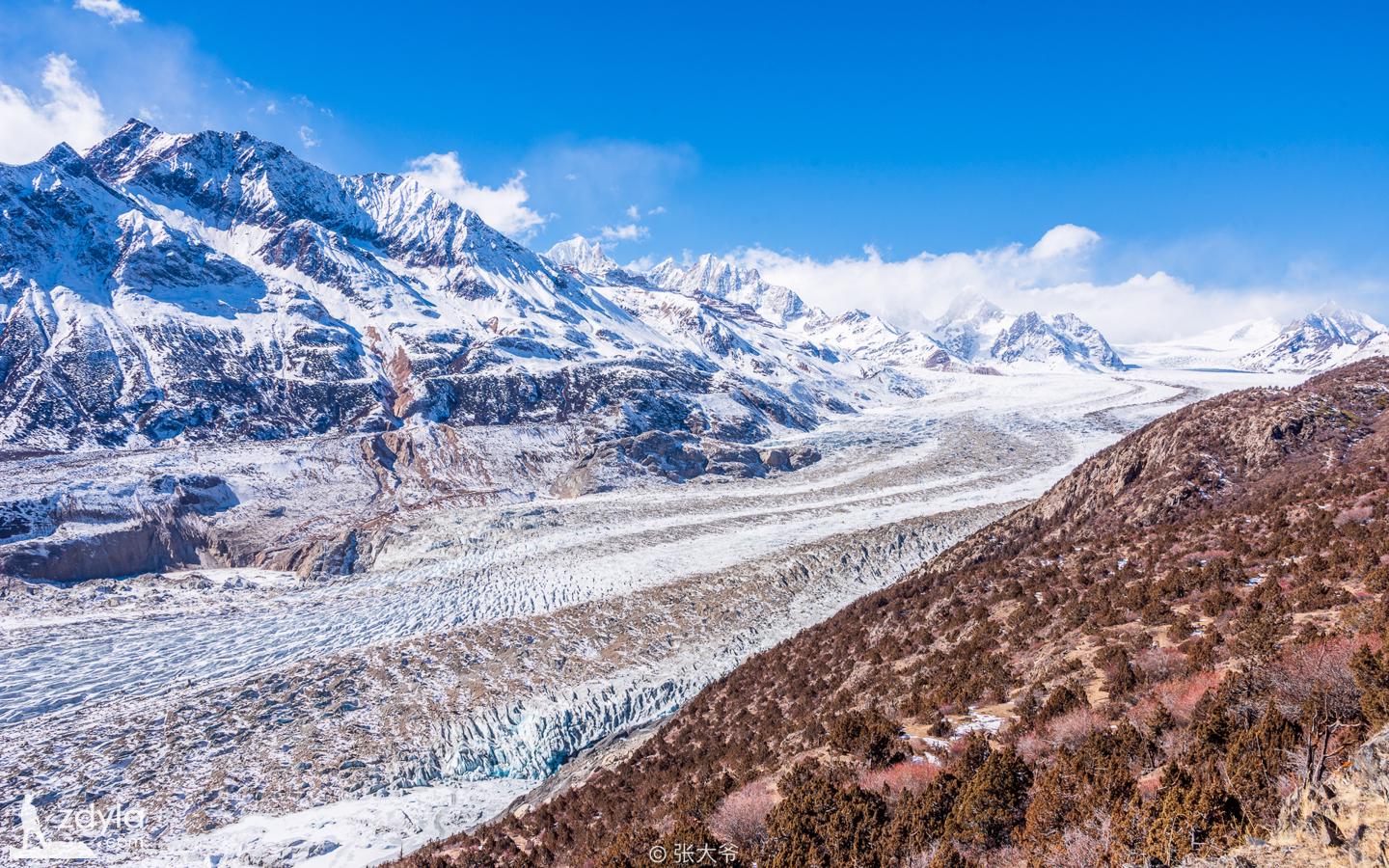 Laigu glacier is located in Ranwu Town, Basu County, Changdu region, Tibet, adjacent to Ranwu lake. It is a general designation of a group of glaciers near laigu village. It is one of the three largest glaciers in the world, including Meixi, Yalong, ruojiao, Dongga, xionga and niuma glaciers. Among them, Yalong glaciers are the most spectacular.

The glaciers melt into Ranwu lake, making the most beautiful lake on the Sichuan Tibet line, or covering its dazzling light.

First acquaintance to the ancient village

In the past, laigu village has always been a small closed village in the valley. When the road hasn't reached the village, the easiest way to get in and out is to seal the lake in winter. Other times, you can only climb mountains and mountains 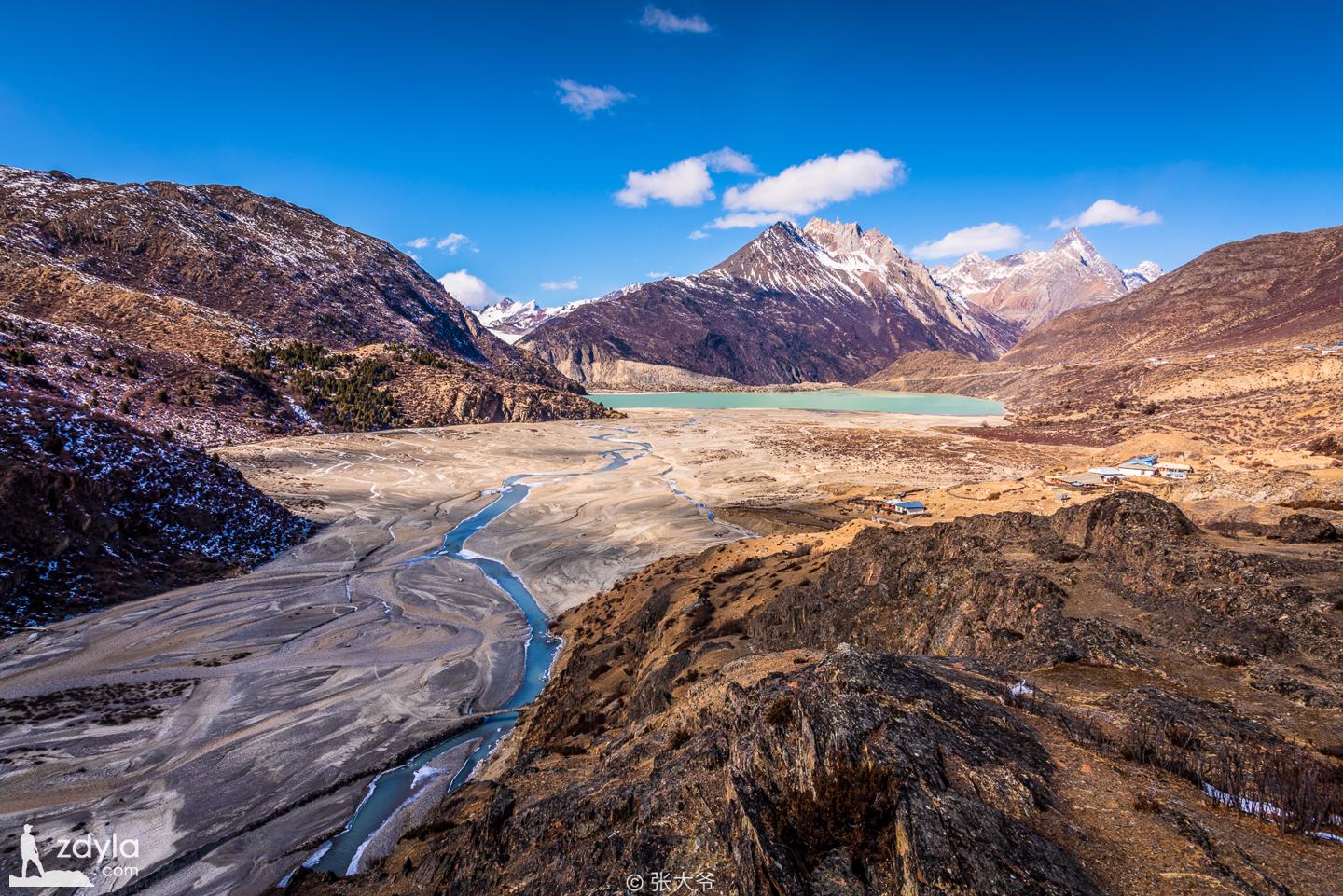 So far, laigu village has maintained the most original and semi farming and semi grazing style of Tibetan village. The houses in the village are relatively scattered, which are divided into several smaller villages and settlements, such as shatuna, lanager, qu'e and ranmu. The farthest distance is two or three kilometers. There are lots of Tian'an between the villages. There are four peaks surrounded by snow mountains, i.e. Geling, Xiana peak, buwangla and Dayu barrier. Each snow mountain pushes down a huge fan-shaped glacier and forms a barrier lake at the front of the glacier. Come to the ancient village and sit between the glacier and the snow mountain. The cows and sheep go out of the house. The chickens and dogs sing to each other. The fields and fields are crisscross, and the pagoda is filled with mulberry smoke.

Dongga glacier belongs to the glaciers that are gradually disappearing. The huge ice tongue has retreated to the mountainside

However, at the peak of glacial development, the valleys that were crushed out by the backlog of ice tongues are still visible. 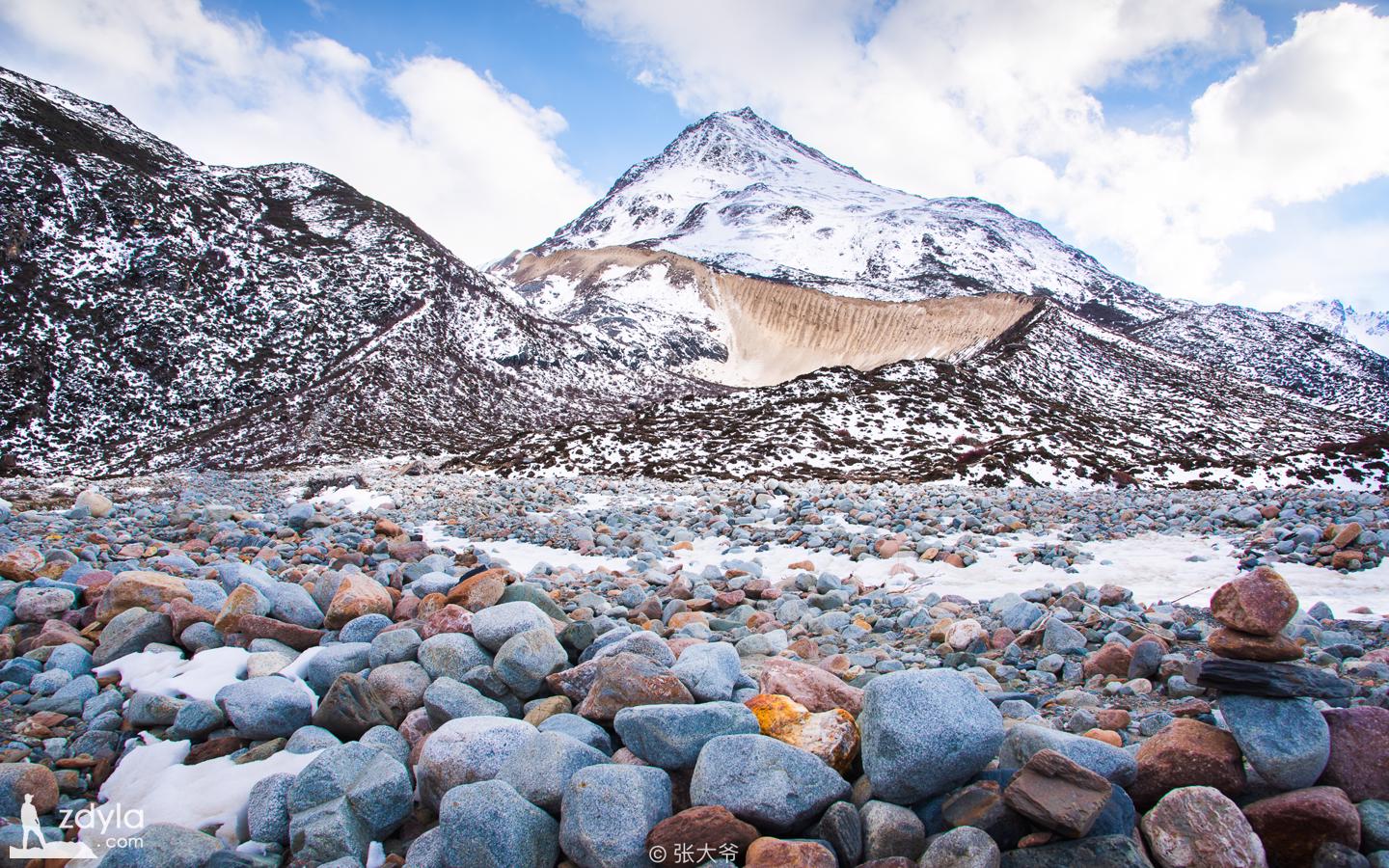 It seems to be a big open mouth of the mountain, constantly blowing out the cold wind.

In the valley, the still lively stream falls over the cliff, just like a piece of white silk hanging from the top of the cliff, forming a stunning winter waterfall landscape, which makes us most impressive. The ice layer shows blue-green color, and the shape is like the "frozen throne" 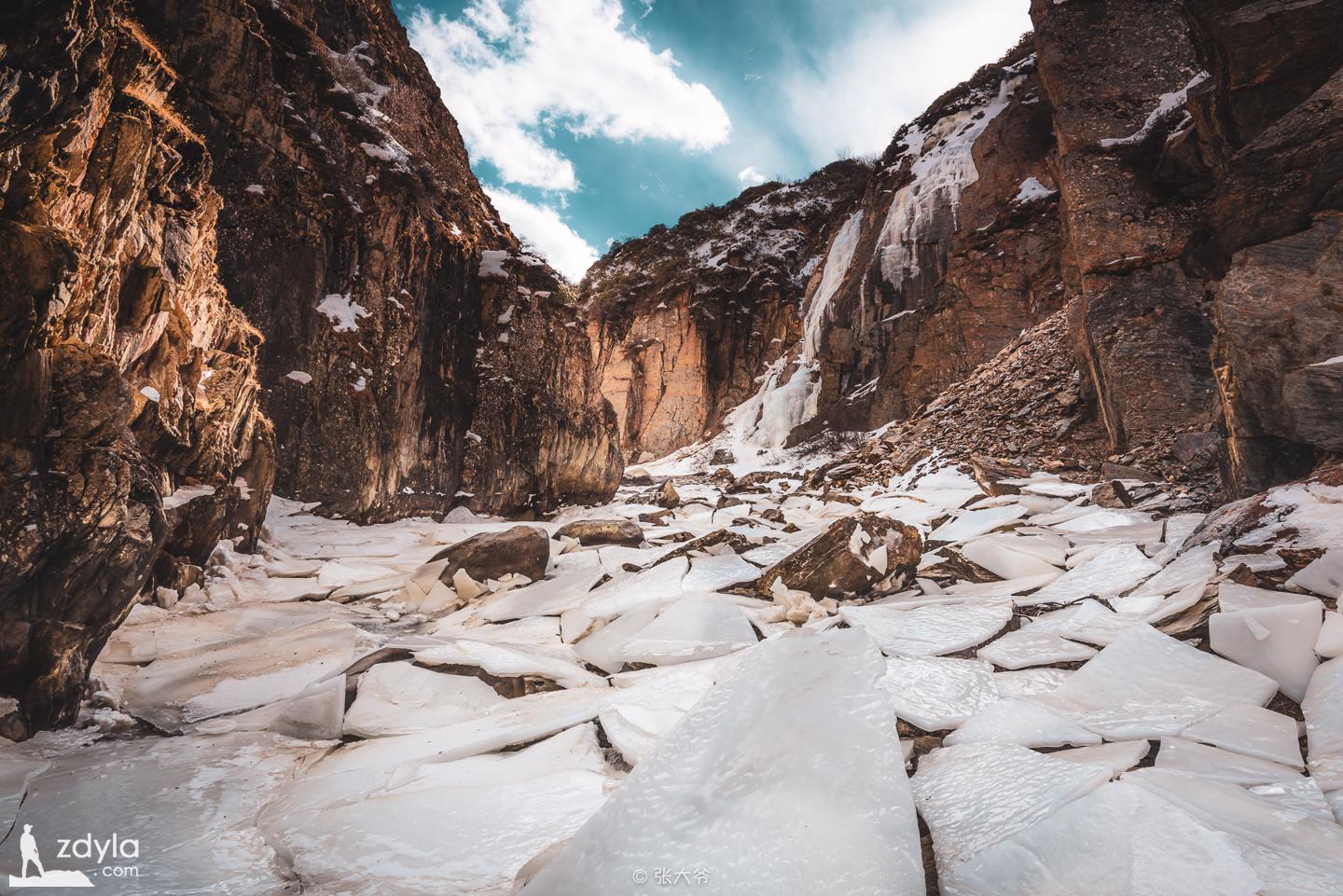 More in-depth, we seem to be in a magical world of ice. Suddenly, there is a layer of ice with a thickness of more than ten meters in the river valley, with ice cracks all over it, like ice dragon claw marks. The danger is accompanied by the beautiful scenery, curious but timid. At the end of the ice layer, the ice sheet with a thickness of several centimeters on the surface of the river bed collapsed on the river beach because there was not enough river water to support it, forming a general spectacle of breaking the heaven and earth 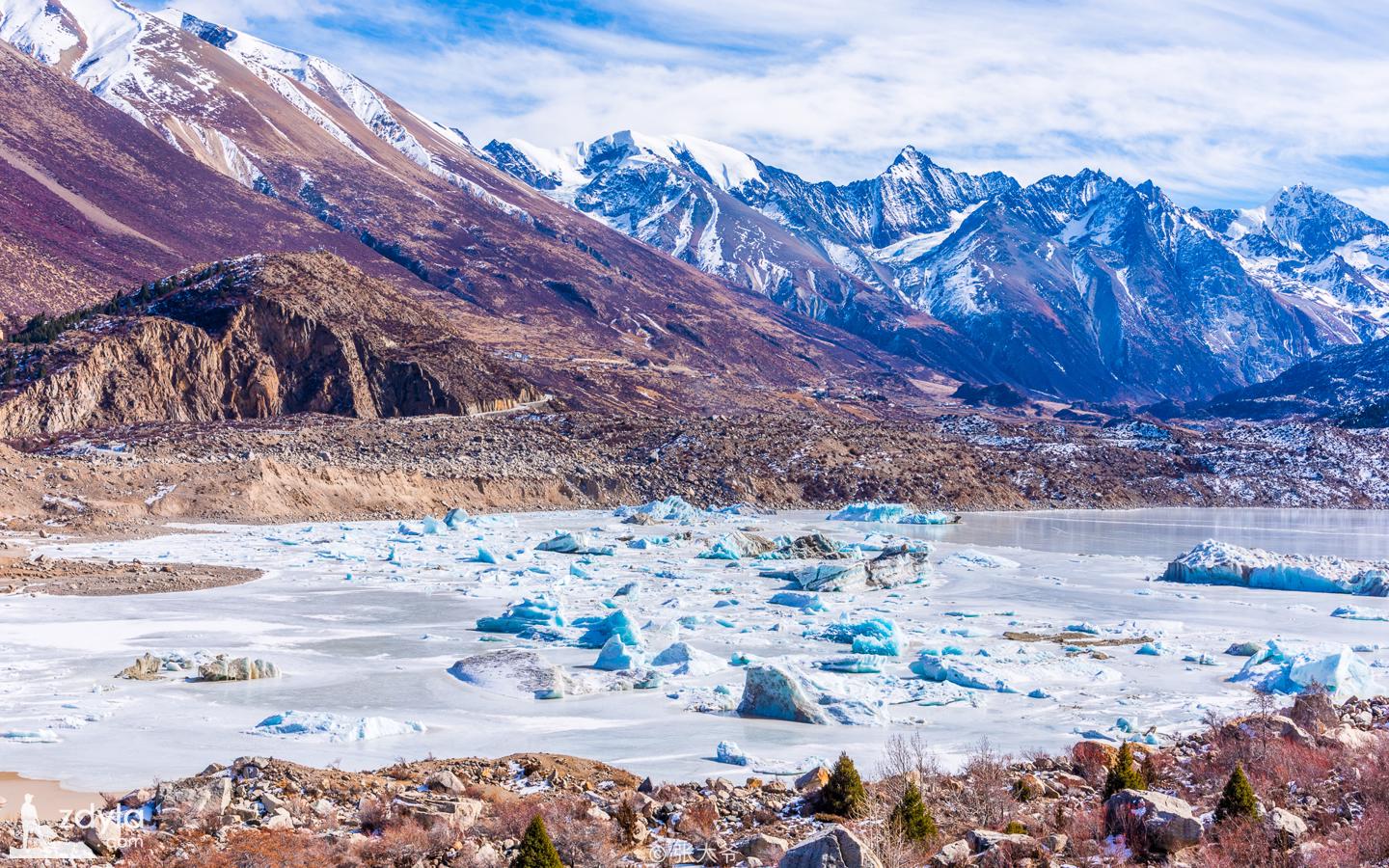 There are several glacier viewing platforms developed in the ancient village. Near the ice lake at the entrance of the village, you can watch the ice tongue at a close distance. There are also large and small icebergs floating on the ice lake, which looks a little bit like Antarctica. Every January and February in winter, when the ice lake is completely frozen, you can directly walk into the glacier. 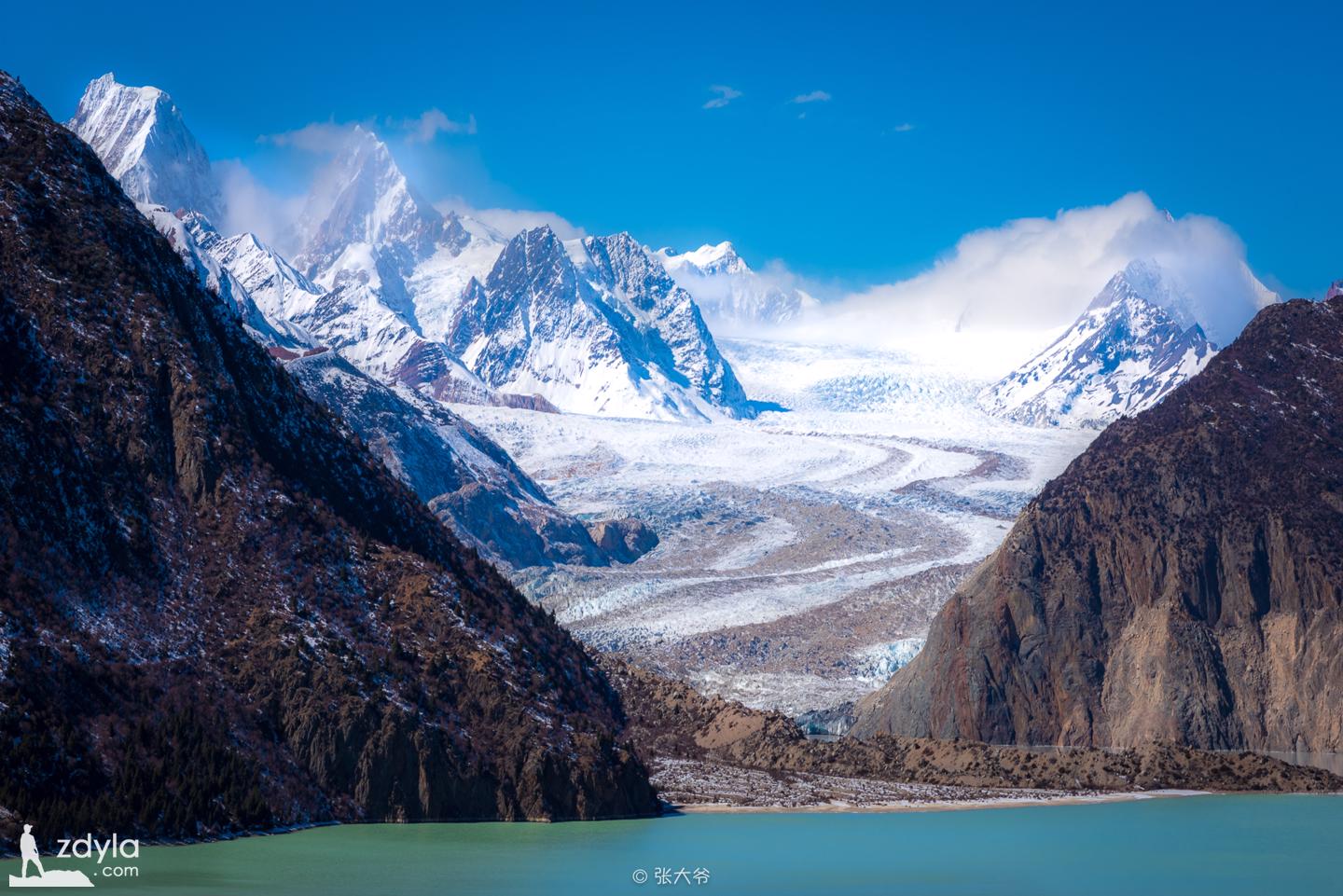 The viewing platform at the door of badoji's home, the village head, can view the Yalong glacier from a distance, cooperate with the green langcuo, and it's a fairyland like picture

If you want to get close to Yalong glacier, you can hike to the top pasture behind Daba village! 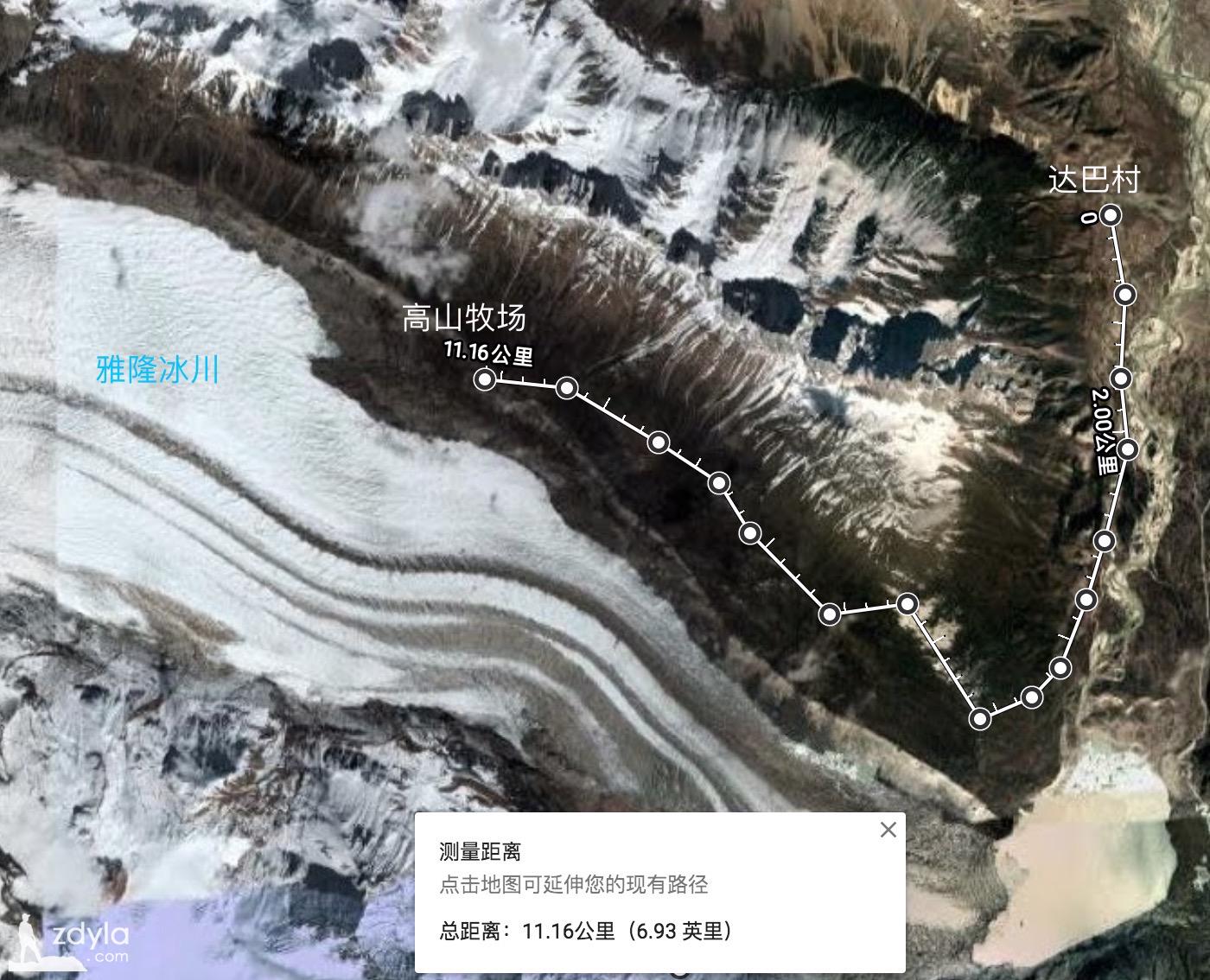 Most of the mountain roads in the route are uphill, which requires a lot of physical energy. You can also take local people's motorcycles up the mountain, back and forth 200 - 300 RMB! 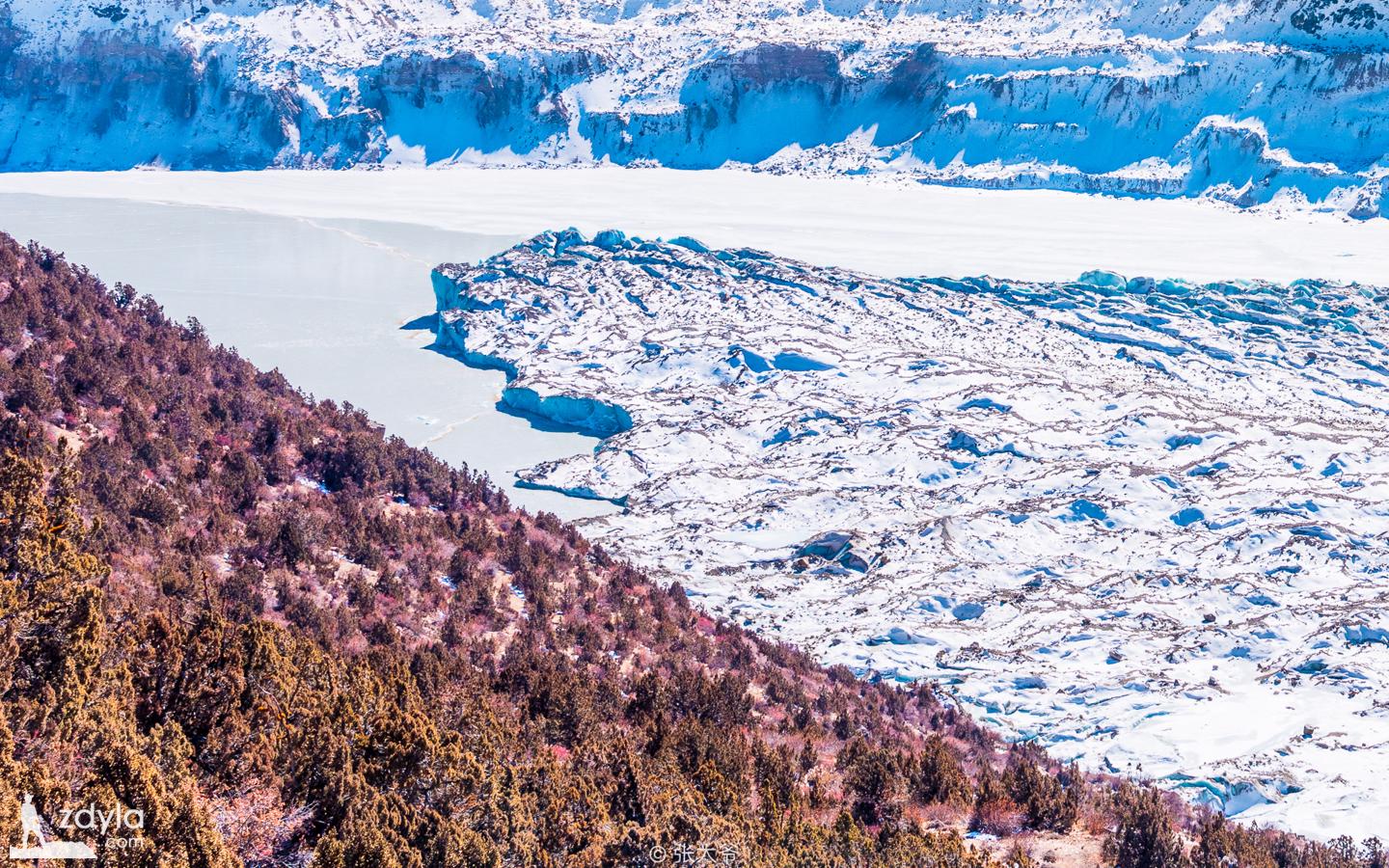 If you go deeper, you can walk into Yalong glacier, or even climb to the top of the glacier. However, it must be noted that the glacier is full of ice cracks, especially after snowing, the glacier can't see any trace after being covered by snow. It's very dangerous to fall into or get stuck in the ice cracks accidentally. Generally, tourists are not recommended to enter the glacier!

There are three colorful lakes deep in the mountain. They are not far from the ancient village. You can walk three or four kilometers to reach them 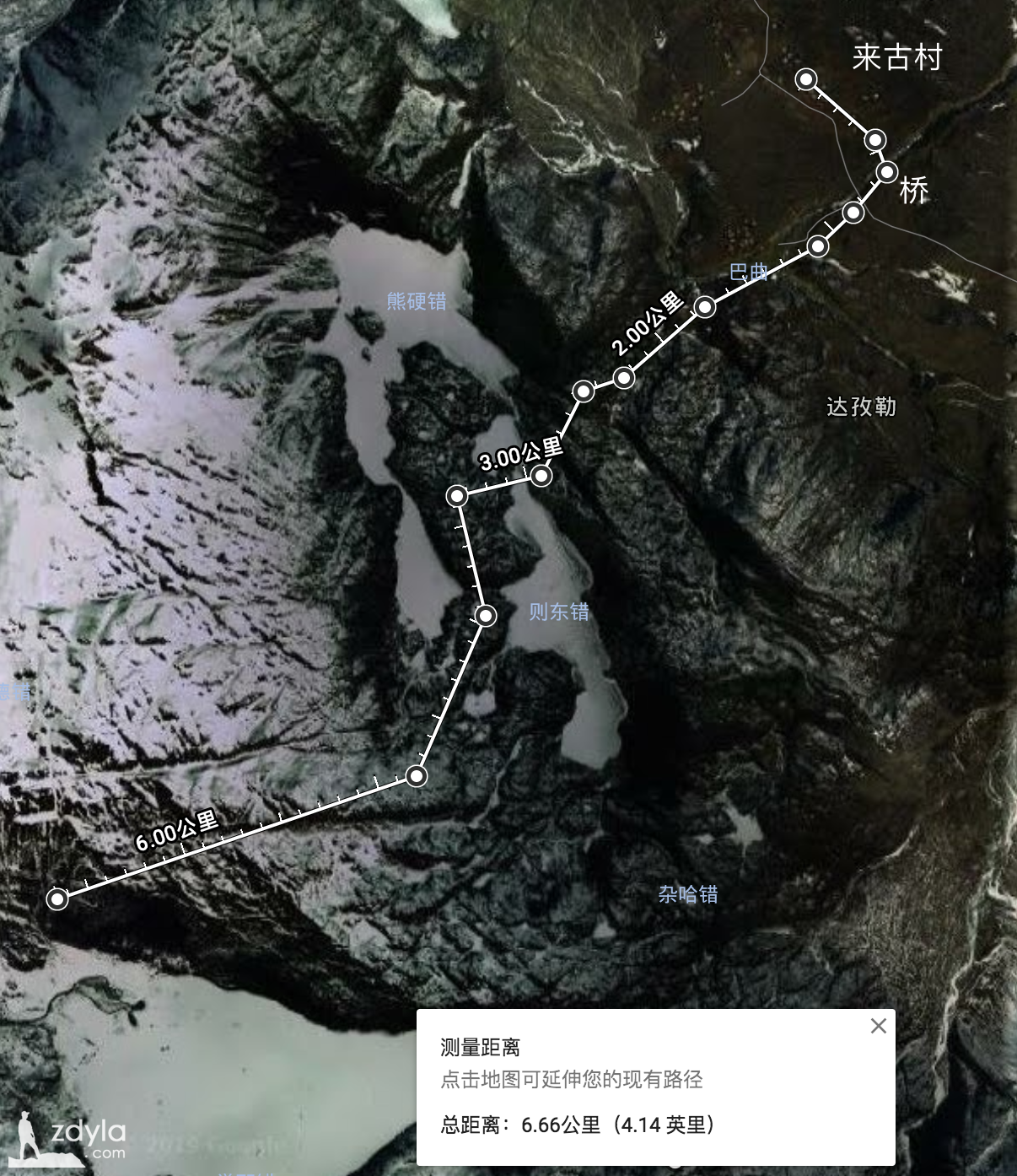 There are several beautiful lakes hidden on the mountain opposite to the ancient village, of which Xiong qiancuo is the most amazing. The lake water is a gradual green, like jade 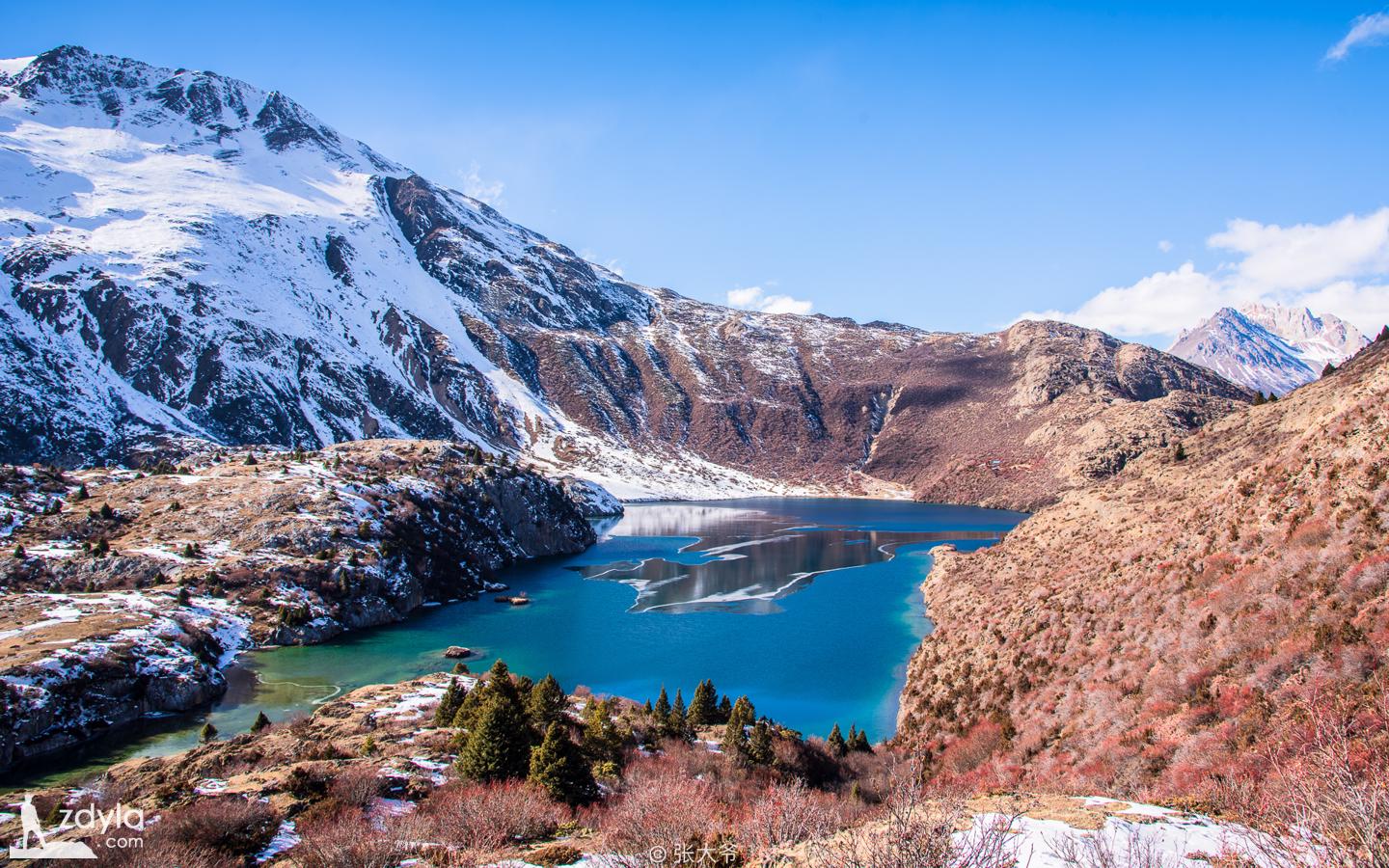 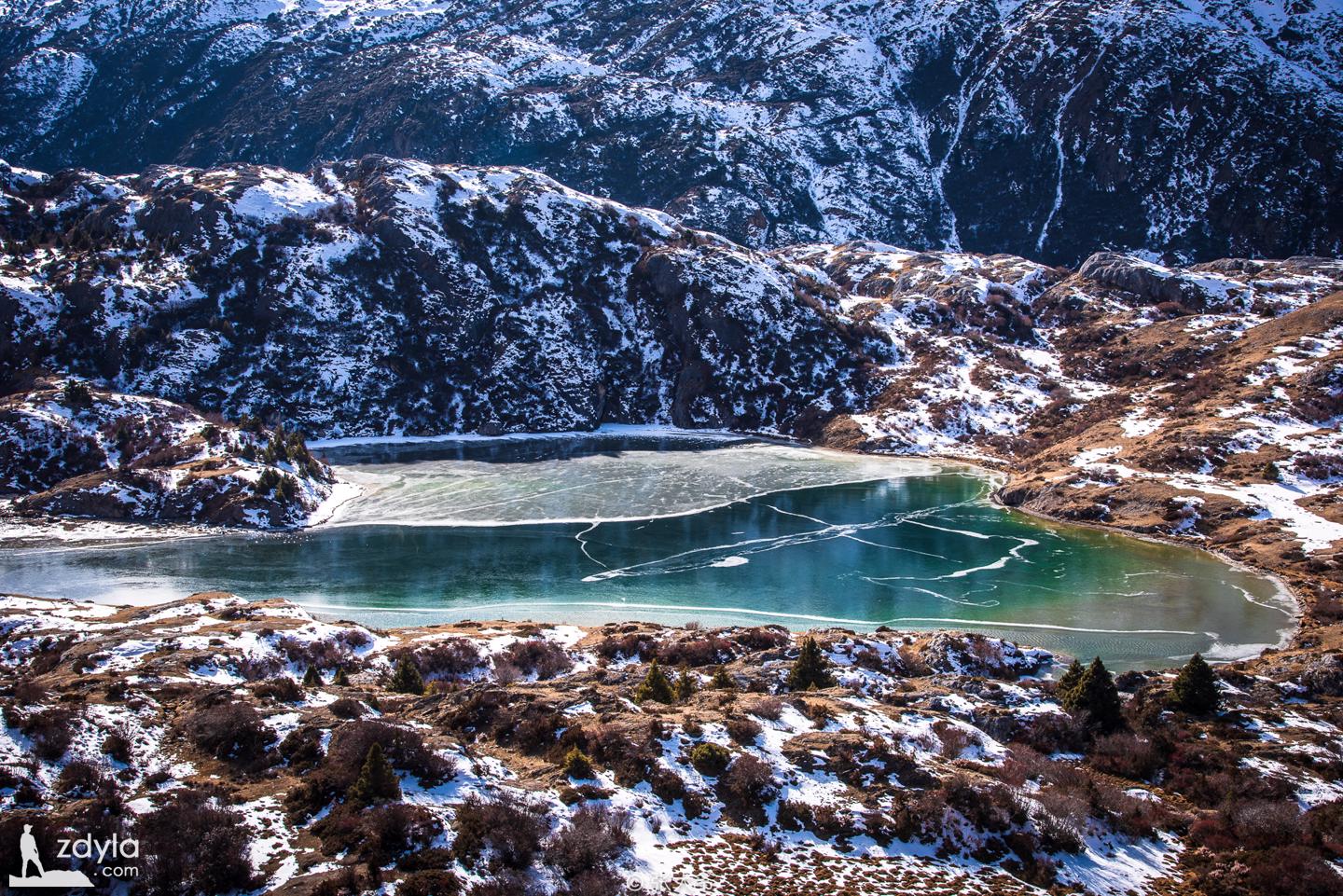 It's not a long way to watch Xiong qiangcuo and Ze Dongcuo. You can walk up to four kilometers. According to the route shown in the figure, find a small bridge across the river and walk up the mountain after crossing the bridge. 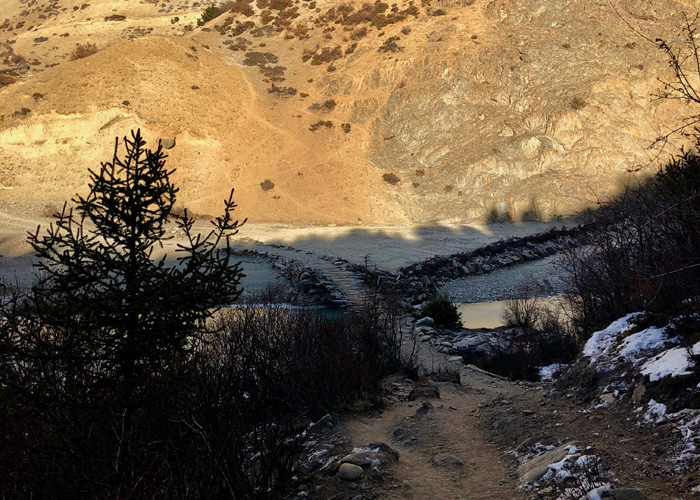 A small bridge across the river

To watch snow, you need to climb another mountain, but the lake view is general. Because it is too close to the glacier, when the sun is high, the melt water will pour into the lake, which will make the lake muddy, and it is not worth watching

The ancient village is located in the plateau, with strong sunshine. It is very important to prepare sufficient moisturizing and sunscreen skin care products. In addition, the temperature difference between day and night is large, and the weather in the mountains is changeable. The best choice is to wear a light charge coat or down jacket.

As there is no fixed bus station in Ranwu Town, it is more suitable to go from Linzhi or Bomi because it is easy to find a bus. When we set out from Mangkang City, there was a shift a few days ago. There were no fixed stations in the villages and towns passing by the county. It was responsible for covering all stations from Mangkang to Lhasa, and generally only stopped by the roadside.

The distance from Mangkang city to Ranwu town is nearly 350 kilometers. Along the way, it passes hongla mountain, Dongda mountain, Rumei Town, Yela mountain, seventy-two turns of Nujiang River and other famous scenic spots. The bus fare is estimated to be about 350 RMB. The local minibus fare is 50 RMB, 2 - 3 hours.

In view of the geographical environment of the ancient village, it is impossible to get a good environment for food and accommodation. Therefore, it is necessary to bring some food with you, and do not dislike those who are not used to eating. Until now, the domestic water of each household in the village still relies on the women's bucket by bucket to get back from the river. If you want too much, you are hypocritical.

I live in xiangbadoji's home in the ancient village. There is no single room, 40 RMB bed, 30 RMB for breakfast and dinner. It's cheap and affordable. 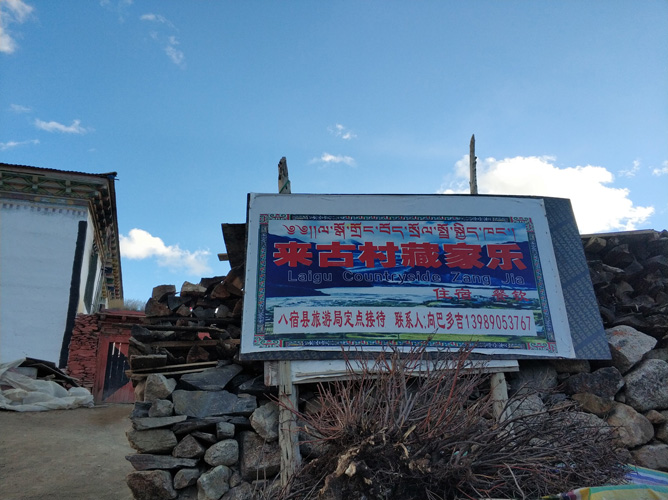 All daily necessities need to be prepared by oneself, such as toiletries, towels, wet paper towels, etc

Laozi has said: the world is the most flexible, and the world is the most rigid. No world is weaker than water. If you are strong, you can't win. It's about the softness of water. Everyone has heard that "water drips through the stone", but when the water turns into ice, it shows another great power. The "little whirlpool" at the entrance of Dongga glacier is the scar that has been pressed by the ice for many years, similar to being cut

After overlooking Yalong glacier, I realized that glacier is called glacier because it is not only ice, but also flowing ice. It has a certain shape and level, and has plasticity. Under gravity and pressure, it produces plastic flow and massive sliding. The surrounding glaciers rush into the valley together, squeezing the middle glaciers out of the S-shaped curve moraine

Laigu village is still a secret place that has not been fully developed. Even the Yalong glacier has been developed, only a few viewing platforms have been built. Laigu village is also surrounded by beautiful lakes and magnificent snow trees. Standing here, you can see six marine glaciers. This kind of natural landscape is unique in China and even in the world, and it is an excellent place for viewing glaciers in China.

It is not guaranteed that the phone number of the contact person will be changed or invalid. You can call to have a try, which is also a convenience on the way.

PS: Gama oju is a nephew of badoji. If you need to ride a motorcycle up the mountain, you can contact him!

Prev: Travel around Siguniang mountain and embrace the most beautiful lady in Shushan
Next: ABC hiking in Nepal