In 2D environment, the common collision detection methods are as follows:

In addition, there are some scenarios where we can achieve the collision we want as long as we have agreed on the limiting conditions, such as the following collision bounce:

When the ball touches the border, it bounces (for example, the speed in X / Y direction is reversed).

For example, when a person goes to the 100px position without jumping, he will encounter stones and so on.

Therefore, some scenes only need to set appropriate parameters to achieve collision detection.

Concept: by judging whether the distance between the centers of any two circles is less than the sum of the radius of the two circles, if less than, it is a collision.

The distance between two points can be obtained by the following formula:

Judge whether the distance between two centers is less than the sum of two radii: 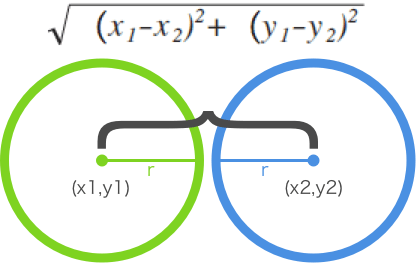 
Circle and rectangle (no rotation)

How to find the nearest point on the rectangle to the center of the circle? Next, we look for the x-axis and y-axis respectively. To facilitate the description, we first agree on the following variables: 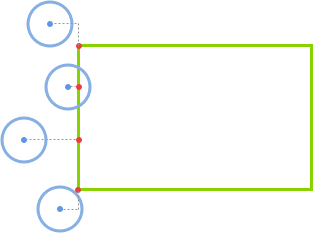 If the center of the circle is directly above and below the rectangle (else)
that closestPoint.x = circle.x. 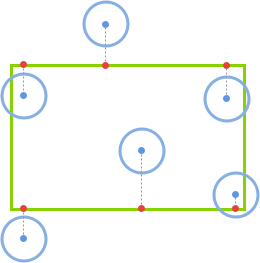 Similarly, for the y-axis (not illustrated here):

The center of the circle is on the right and left sides of the rectangle (else)
that closestPoint.y = circle.y.

See the Pen Circle and Rectangle by Jc (@JChehe) on CodePen.

-The rectangle must be axisymmetric, that is, it cannot be rotated.

Concept: even if the rectangle rotates with its center as its rotation axis, the essence of judging whether it collides with the circle is to find the nearest point on the rectangle from the center of the circle. 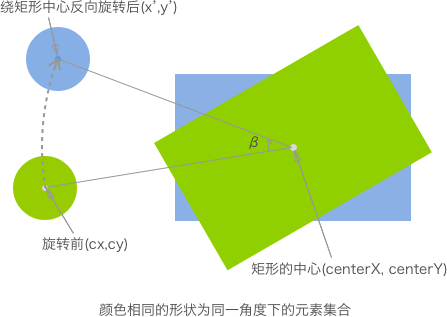 First, the formula that can be applied directly is given, so as to obtain the center coordinates after rotation:

Of course, (C, d) is the coordinate relative to the rotation point (axis) after rotating a certain angle. Therefore, the coordinate value of the center point of the rectangle is added to the "directly applicable formula" mentioned above.

From the figure, we can also draw the following conclusion: point C after point a rotates always moves on the circumference (radius is | ab |), using this point, we can make the object move around the rotation point (axis) in a circle.

After getting the coordinate value of the center of the circle after rotation, you can use the "circle and rectangle (no rotation)" method for collision detection.

Concept: divide the map (scene) into grids. In the map, all the objects involved in the detection store the coordinates of their own lattice, so you can think that two objects are collision when they are adjacent to each other, or two objects are collision only when they are in the same lattice. In addition, the premise of using this method is that all possible collision objects in the map should be the size of the lattice unit or an integral multiple of it.

Blue x is the obstacle: 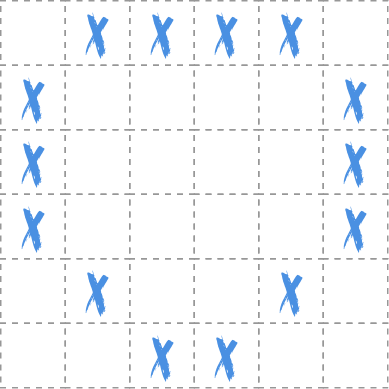 Off screen canvas: related to it is off screen rendering. As its name suggests, it renders somewhere, but not on the screen. "Somewhere" is actually memory. Rendering to memory is faster than rendering to screen. —— Offscreen Rendering

In addition, due to the need of pixel by pixel detection, if all the pixels in the entire canvas are operated, it will undoubtedly waste a lot of resources. Therefore, we can get the intersecting region by operation first, and then only detect the pixels in the region. 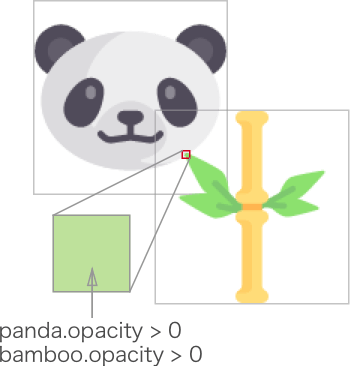 Concept: by detecting whether the velocity vectors of two objects have an intersection, and the intersection meets certain conditions.

For the following case of throwing a small ball into the barrel: draw a line (ා1) that coincides with the speed vector of the object, then start from another object to be detected, connect to the previous object, draw the second line (ා2), and determine whether the collision occurs according to the intersection position of the two lines.

Legend of throwing the ball into the barrel: 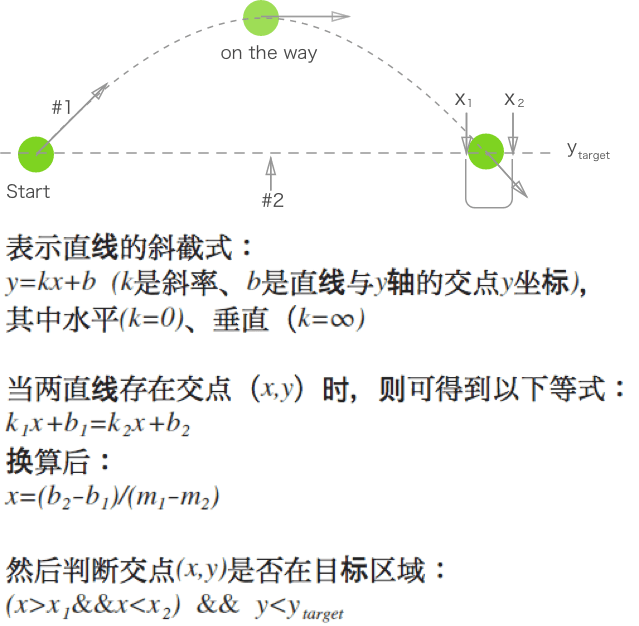 In the process of small ball flying, the intersection of two straight lines needs to be calculated continuously.

When the following two conditions are met, the application can determine that the ball has fallen into the bucket:

To judge whether two convex polygons collide at a higher level of abstraction:

There are several points to be solved in the above code: 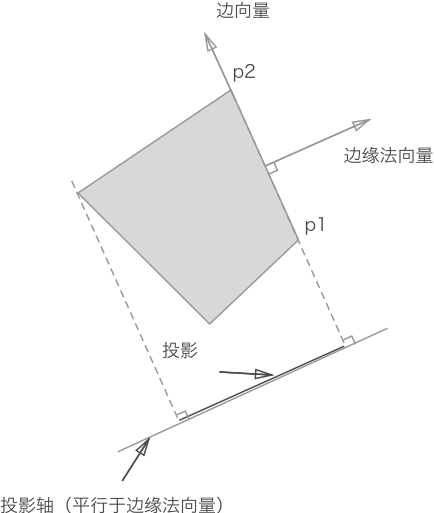 The following is a partial implementation of the vector object. See the source code for details. 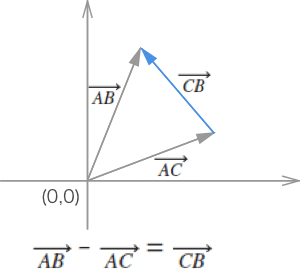 More knowledge about vectors can be learned through other channels.

For ease of understanding, the example graph places the axis origin (0,0) at the appropriate position of the projection axis of triangle edge 1.

The projection object can be obtained from the above:

Collision detection between circle and polygon

Because the circle can be approximately regarded as a regular polygon with numerous edges, it is impossible for us to project and test one by one according to these edges. We only need to project the circle onto a projection axis, which is the line between the center of the circle and the nearest point in the polygon vertex, as shown in the figure: 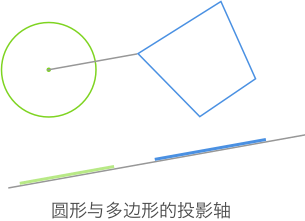 However, the collision detection between circles is still whether the distance between the original two centers is less than the sum of the two radii.

For the overall code implementation of the separation axis theorem, see the following cases:

Generally speaking, if the two sides still exist after the collision, then they need to be separated. After separation, the two objects that collided with each other can be bounced away, they can also be glued together, and other behaviors can be realized according to specific needs. But the first thing to do is to separate the two, which requires the minimum translation vector (MIT).

If we need to judge all objects in two times in each period, it will cause waste (because some objects are distributed in different areas, and will not collide at all). Therefore, most games will divide the collision into two stages: coarse and fine (broad / narrow).

If readers are interested, they can consult relevant information by themselves.

When you have a smaller list of entities, you can use the fine-grained algorithm (such as the collision algorithm described above) to get an exact answer (whether there is a collision).

There are many kinds of collision detection, and choosing the right one is the most important.

Like The Article To View All
Prev: Autumn of emerald
Next: Golden fairy tale world