Wander outside reality door ZDY ' LOVE
now you really got Memories of Tibet (19) : Goodbye, Ali
Use love to fantasize... Leaving Zada, the return journey becomes dull, and the sky is getting dark, everyone is drowsy in the car

My body has completely adapted to the Tibetan environment. It is no longer taboo for me to eat spicy food, drink alcohol and overeat. Even my stubborn cold cough has recovered unexpectedly when I walked out of Ali! After passing through the arch again, I saw that the above words had become "welcome to the heaven Ali, the secret place of Tibet". I felt a little reluctant

We didn't get to payang until 8:30 p.m. We went to the Sichuan restaurant again. As the saying goes, "once we are born, twice we are cooked". We were bored and had a fight with the owner's wife. After full of food and drink, the driver Shifu points out that there should be more than 300 kilometers to reach saga

After a day's driving, everyone was a little tired. Especially when the girls heard the news, they broke down and wanted to live nearby first. I asked the landlady if there was a place to stay nearby? The owner's wife replied, "no, it's near the Spring Festival. People have gone home for the new year, and the shops that should be closed are closed. Recently, Zhongba county is looking for them."

Girls like a deflated ball, forced to bear fatigue and hard to ride for more than an hour before arriving at Zhongba county. Then, we enjoyed the most luxurious and pitiful hotel in Tibet. The facilities were old, there was no heating, the bed sheets were not cleaned, and we spent a lot of money but only got warmth from the electric blanket.

The driver suggested that we should stick to it for another two hours. If we go to saga directly, we can live better. The price is also cheap. But it's already 10:30 p.m. without any accident, it will take more than 1:00 midnight to get to saga Girls are strongly against it, but we can only make do with one night, and leave the ghost place before dawn the next morning

After another day's driving, we finally arrived at Shigatse.

It is located in Xigaze, the largest temple in Xigaze city and the place where the Panchen lamas lived in tin after the fourth generation. Zhashlunbu temple is also known as "auspicious Xumi Temple". Its full name is "zhashlunbu baijide QinQu tangjierenan bajiewalin", which means "auspicious Xumi gathers blessings in various prefectures". It, together with "three major temples" Gandan temple, sera temple and zhebong temple in Lhasa, is called "four major temples" of Gelug school. The four great temples, the Ta'er temple in Qinghai and the Labrang temple in Gansu are the "six great temples" of Gelug school. 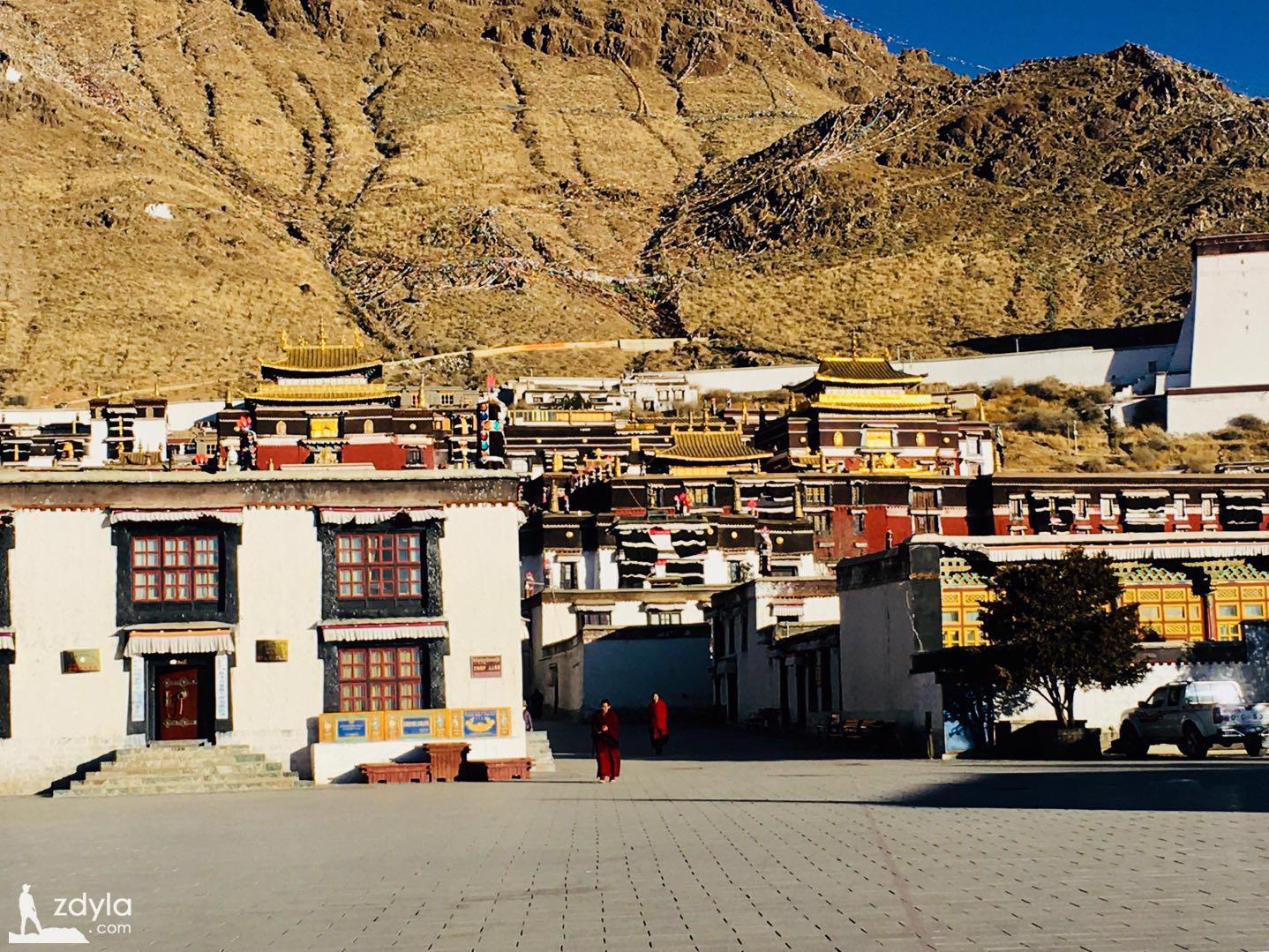 In 1447, the youngest disciple of zongkaba, who was later traced back to the first Dalai Lama's Gendun Juba (Gendun Lord), initially built the zhashrenbu temple with the support of quxiongba sorangbaisang and qiongjaba sorangbangjue, then the great nobles of Tibet. At the beginning, the temple was named "Gangjian Dianpei", which means Xingfo temple in snowy region. Later, it was changed into the current name by Gendun Zhuba, which took 12 years to complete. 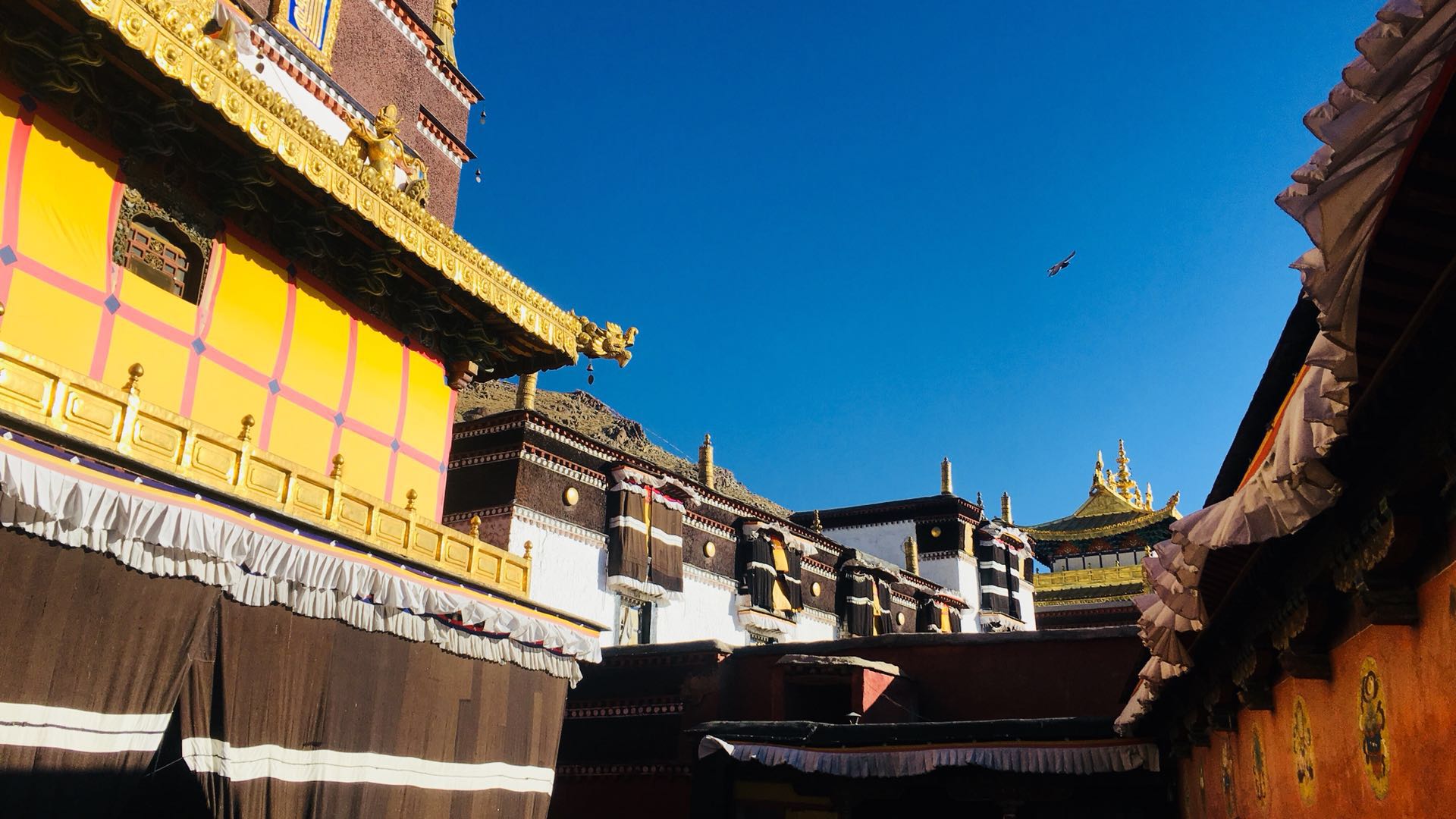 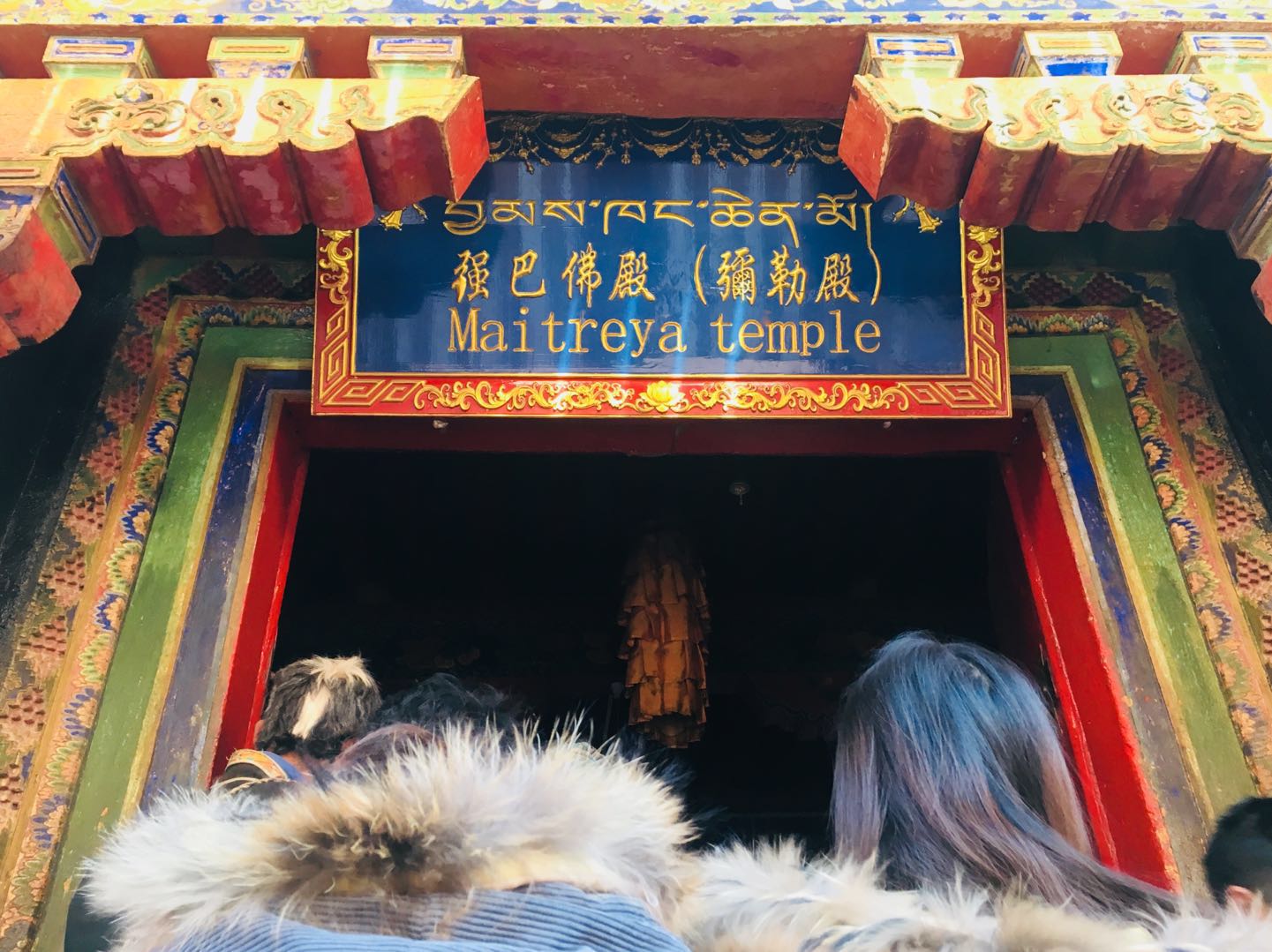 The most magnificent buildings in the temple are the great Maitreya hall and the Panchen stupa hall. The Tibetan language of the great Maitreya hall is "qiangbakang". In the middle of it, there is a gilded bronze Qiangba Buddha, which was cast in 1914 by Qu chinima, the ninth Panchen. Qiangba Buddha is the Maitreya Buddha of Han Buddhism. In Tibetan Buddhism, Qiangba Buddha is in charge of the future Buddha, which is very valued by believers. The stupa of zhashlunbu temple is the relic tower of Panchen. The size of the seven Panchen stupas in the past is different. Some of them offer several Panchen stupas and some only offer one. Inside the pagoda are the sacrifice bodies of Panchen in the past, including the ten Panchen. 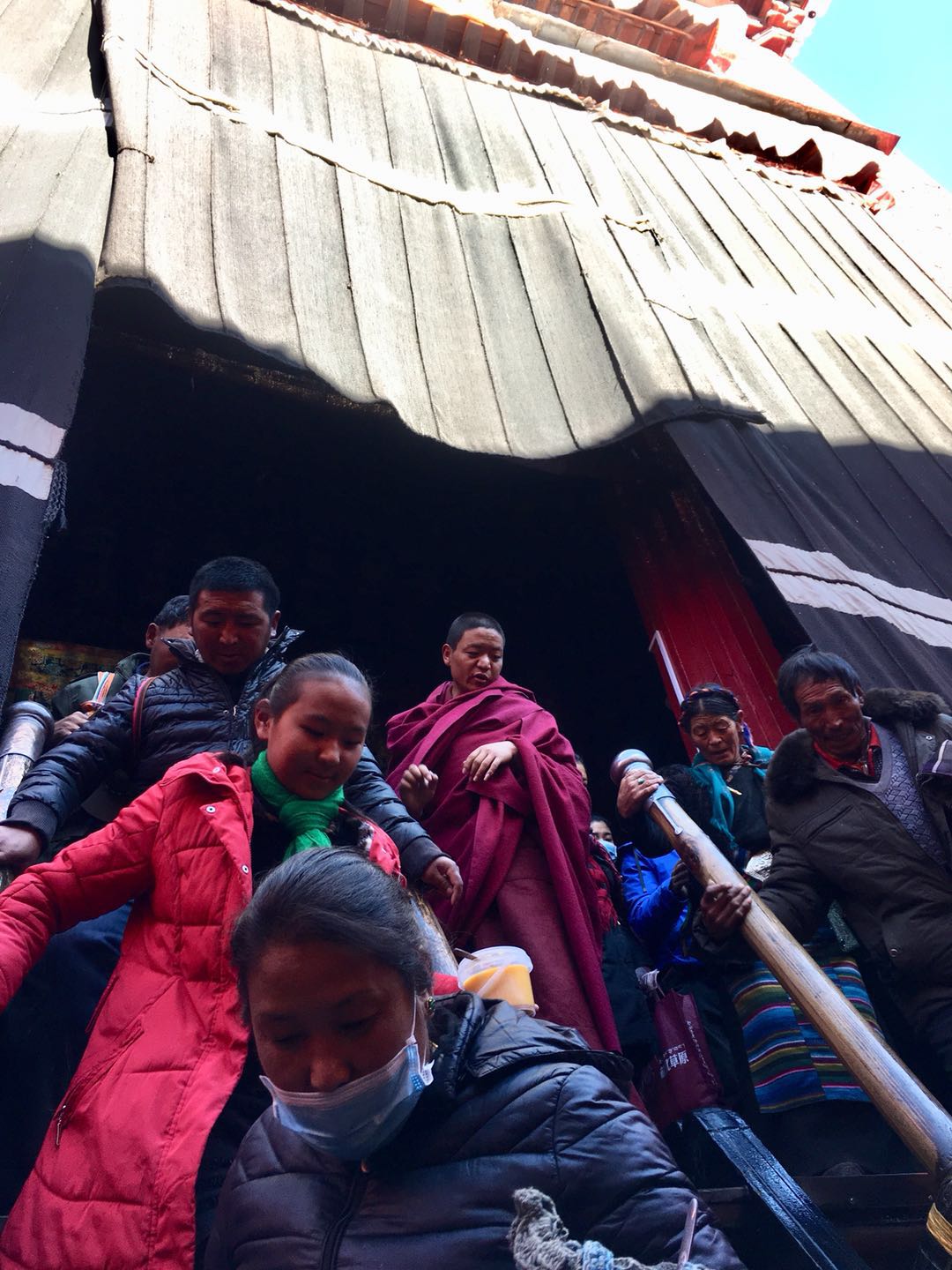 Besides the Tibetan people, there are also believers from Qinghai, Sichuan and Gansu. The gate of every Buddhist temple in Zha temple is full of people. There is a huge copper bell hanging on the hanging beam of the gate. Every believer passing by will knock three times. The floor in front of the gate is inlaid with various gems, as well as the "Swastika" character composed of gems. 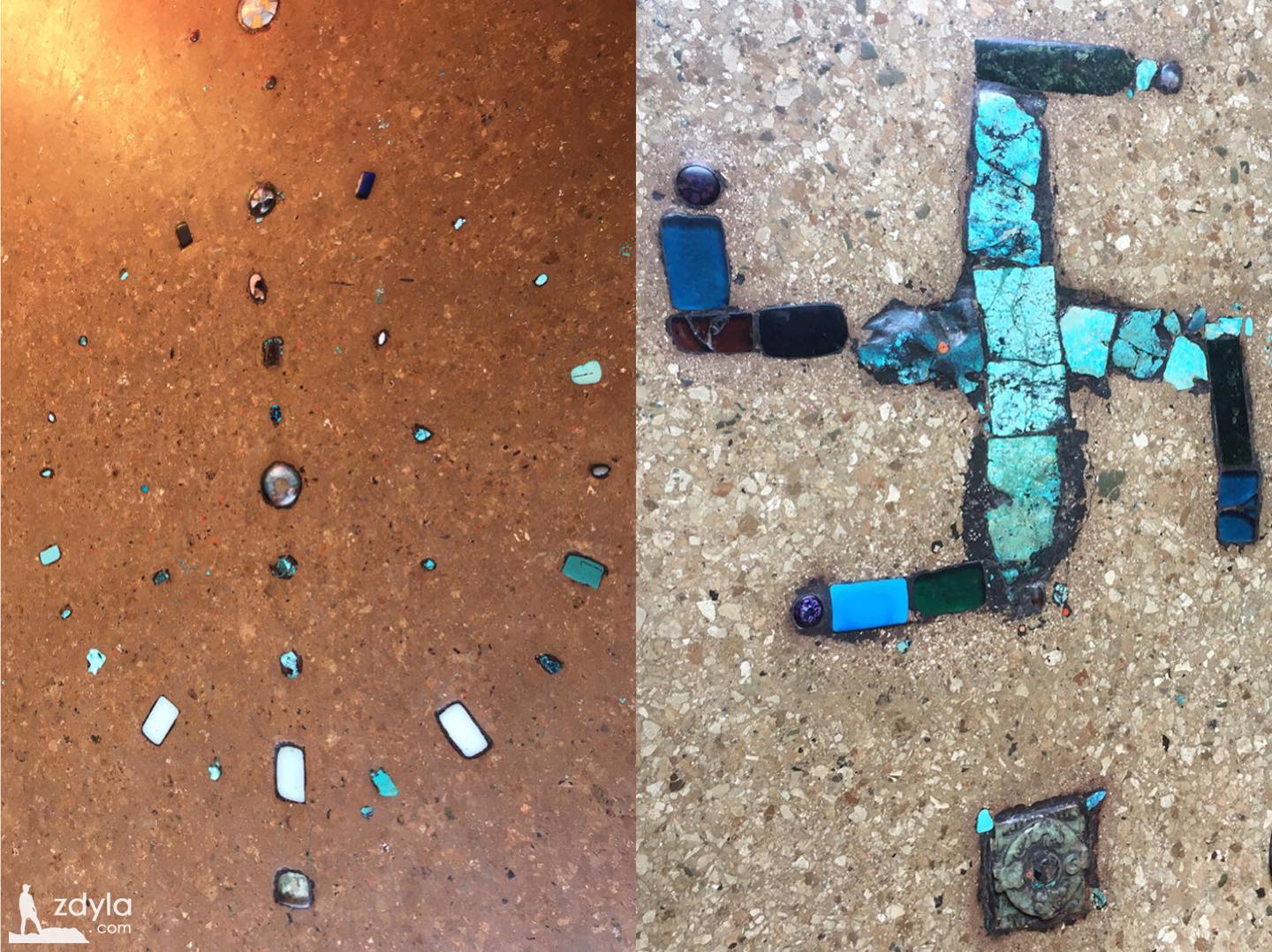 In the temple, believers walk around the Buddha in the center of the planned route and worship. Some of them offer hada, butter and money. At the exit of the main hall, there are a row of lamas. They read Buddhist scriptures in their mouths. In their hands, they sort out the money left by each believer when they pass by. They also look at their mobile phones from time to time. They are very busy

I met a friend in the Buddhist temple. He is a "cleaver". He wants to cleave everywhere he is interested in He is also a travel expert. He has traveled all over the country and is very keen to understand the folk customs and culture. He quietly told me that he would ask the Tibetans around him if he met some Buddha statues that he didn't understand during his visit to Zha temple. They even said they didn't know!!! Even, I saw that he asked the Lama questions about Buddha statues, and I didn't know!!! 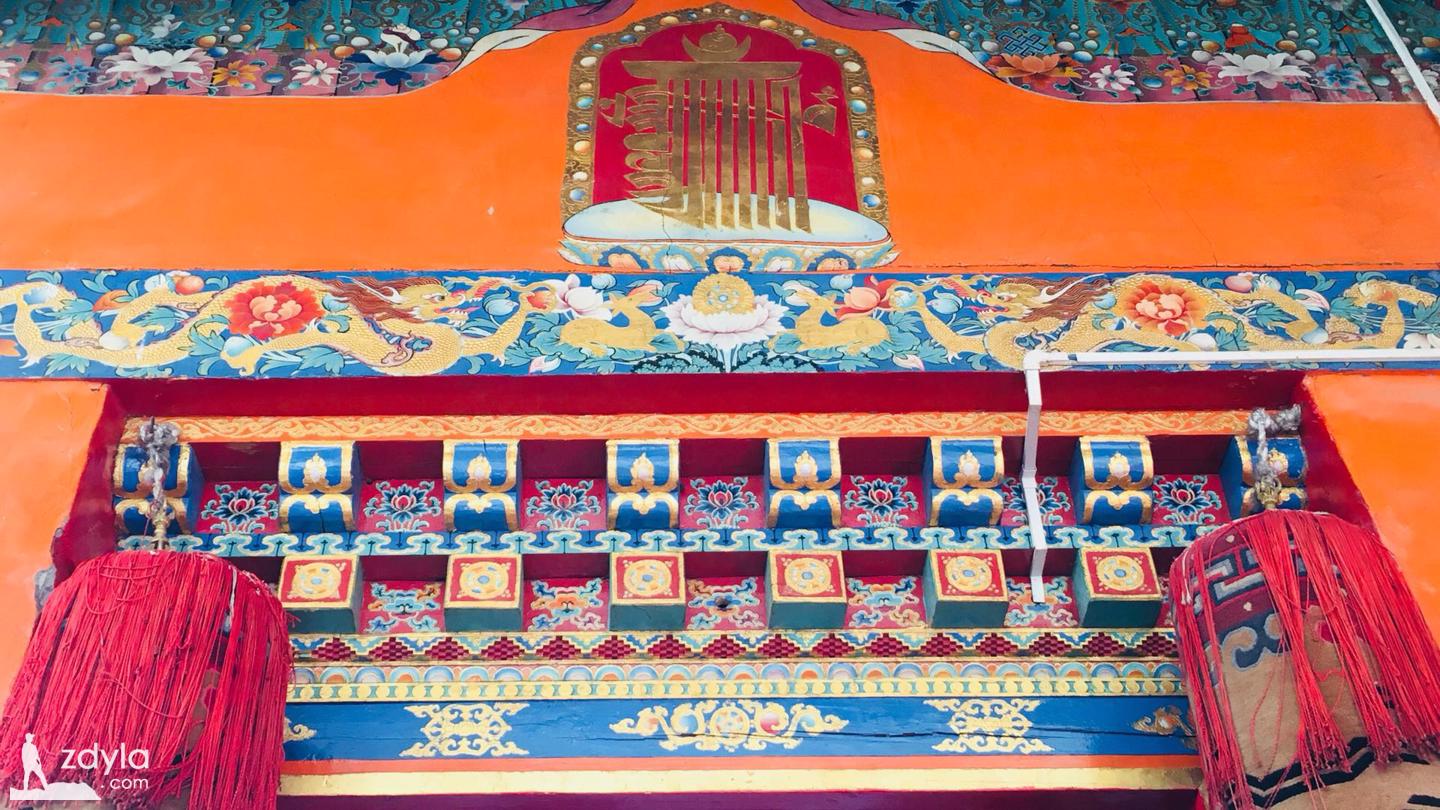 A kind of bad feeling spread all over the body. I sat on the steps and watched the Tibetans coming and going. Everyone had a simple face and a devout heart. I began to despise the monks in the temple. How do these people think of the Buddha they believe in? Poor Tibetans, what do they believe in?

For a long time, I have never taught, maybe influenced by the domestic education, they are the same superstitious products as ghosts and cows. But I also deeply know that human beings will suffer various setbacks in the process of exploring the height of life. The setbacks can be big or small. It is like a wall in the only way. However, it's my tough heart that can really overcome setbacks. A joke says, "everyone knows that I'm holding on, but I'm holding on!" It is this belief of "dead support" that has become the spiritual pillar of people in natural disasters and man-made disasters.

I began to try to understand the Tibetans, who have been living in the roof of the world since ancient times, such as lack of oxygen, severe cold, inconvenient transportation, lack of resources, harsh climate, epidemic disease and short life. Maybe it's because they have tasted the wild roar of nature. Many times, mountains, lakes and rivers will devour their existence, so they respect mountains and lakes for fear, and then turn mountains and lakes to express their awe of nature.

When the weak and small people are destroyed by nature, or because of lamas, and help them to resist disease and suffering, which has become the spiritual pillar of people. Under the influence of Buddhism, the living Buddha, Dharma king and other supreme immortals will naturally appear. They are willing to carry the suffering pressure with themselves in exchange for the world's beauty.

As a young man of literature and art, I only touch the heart of living Buddha through poetry, saying:

Like The Article To View All
Prev: Memories of Tibet (18) : Fairyland
Next: The peaceful Haidian River