Wander outside reality door ZDY ' LOVE
now you really got Memories of Tibet (18) : Fairyland
Use love to fantasize... 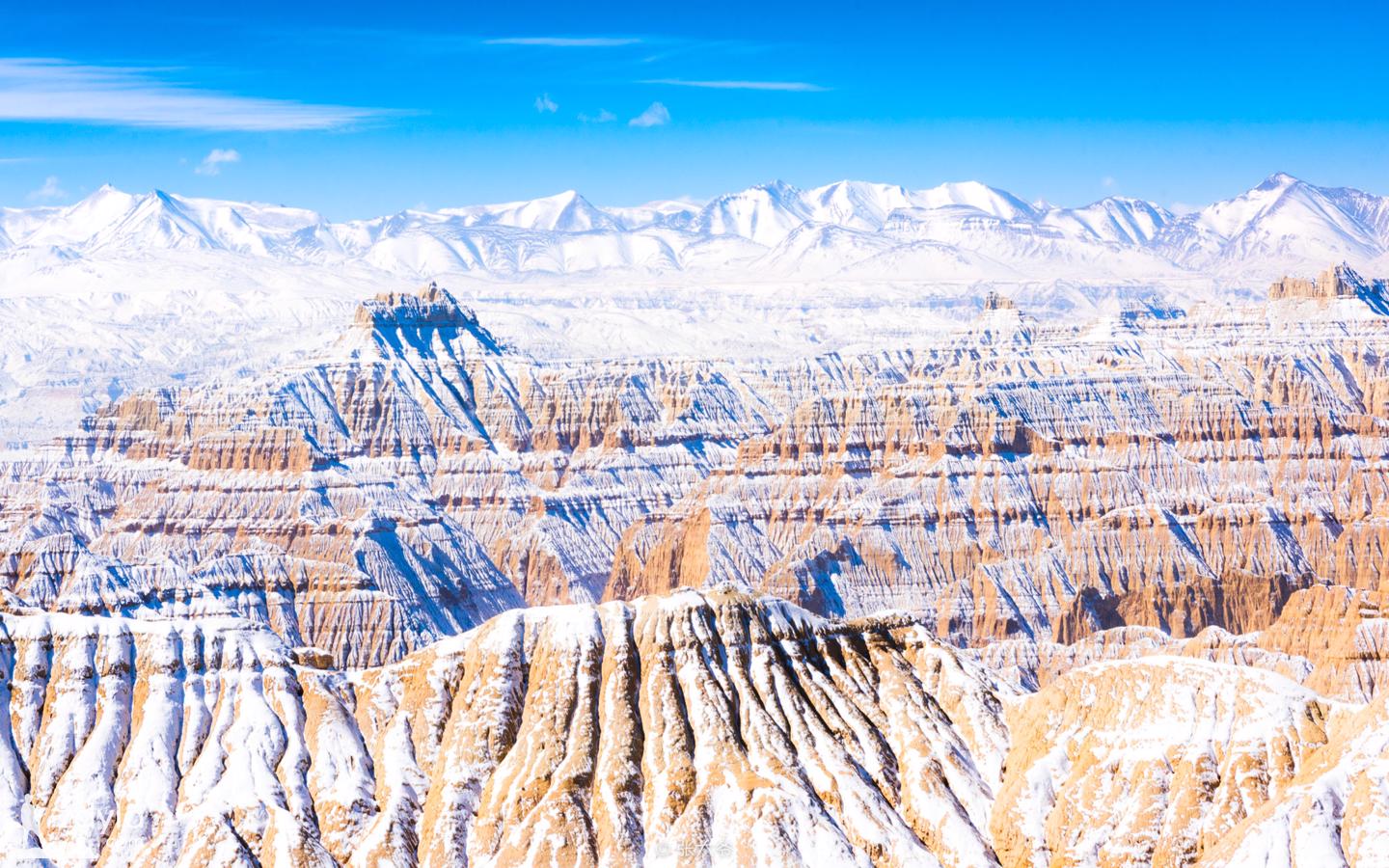 Zada is really a magical place. In Tibetan, it means "a place with grass downstream".

There is a famous landscape area of soil forest in its territory - Zada soil forest. The earth forest is a special landform formed by the influence of orogeny in ancient times, the sedimentary strata at the bottom of the lake have been cut by water for a long time, and gradually weathered and eroded.

According to legend, a long time ago, the area of Zada was a vast ocean with only water and wind under the blue sky. Later, tulin mountain gradually emerged from the sea. Although it is a beautiful legend, it contains certain scientific principles. According to scientists' research, it used to be a great lake with a radius of 500 kilometers. It was the Himalayan orogeny that raised the lake basin and lowered the water level. The mountain rocks exposed to the water had been eroded by wind and rain for a long time.

Shortly after leaving the county seat of Zada, a large number of strange mountains appeared in front of us. They were continuous and could not be seen at a glance. This is the soil forest of Zada. When the sun rises, the sunlight slants on the mountain, clearly outlining the peculiar outline of the earth forest. The height of the ravines is scattered for tens of meters, with various shapes.

Eighteen kilometers to the west of Zhada county is the site of the ancient kingdom of Georgia.

In the middle of the 9th century, when the Tubo Dynasty collapsed, some of the descendants of the royal family fled to Ali and established three small kingdoms, among which dezugun established the Guge Dynasty. Founded in the first half of the 10th century A.D., this kingdom inherited 16 kings. The palace Castle expanded continuously from the 10th to the 16th century, and reached its peak. It ended after the collapse of the Tubo Dynasty in the 17th century (destroyed by the British colonists). 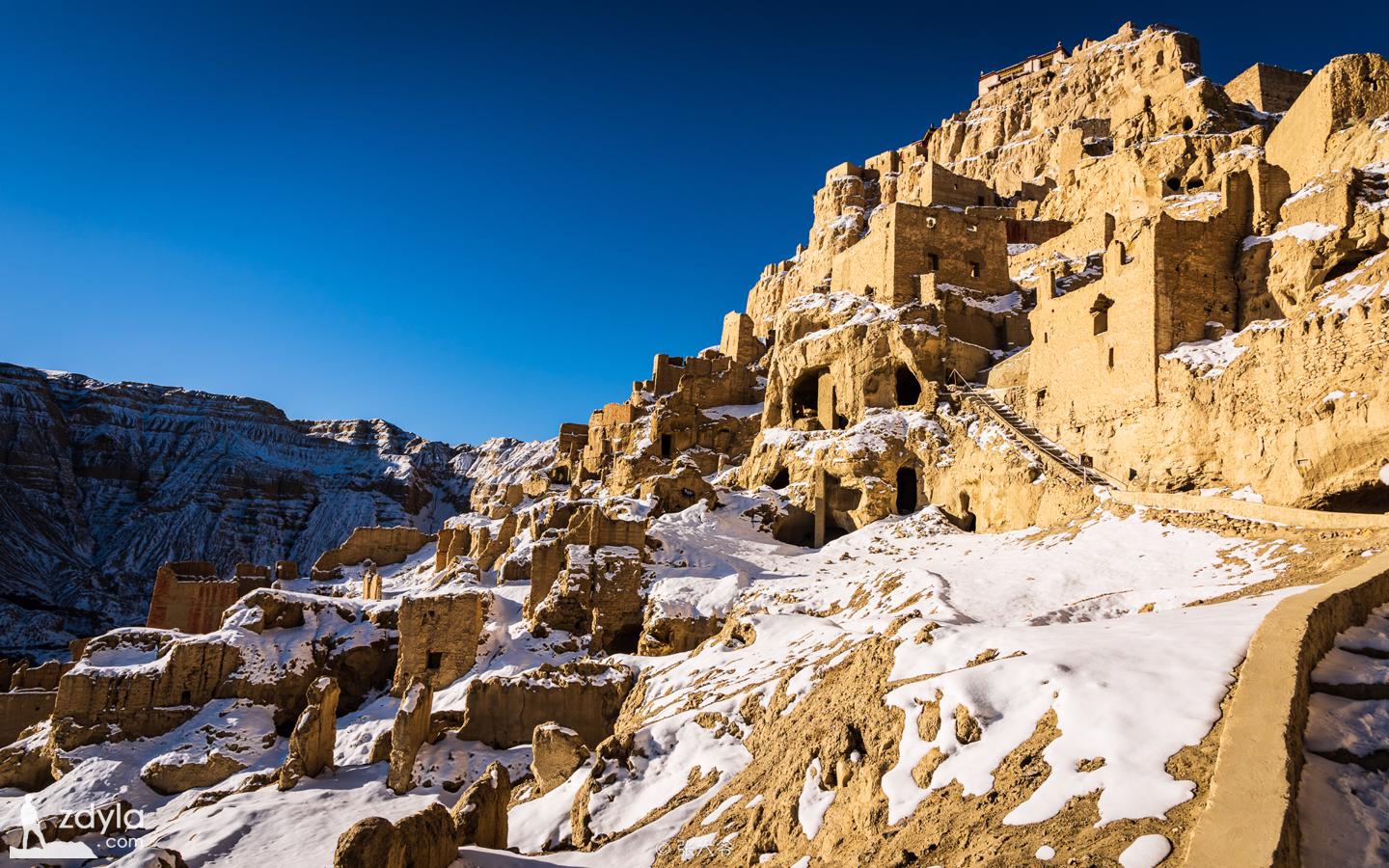 The lofty old city of Guge is located on a earth mountain on the South Bank of Xiangquan River in the northwest of Tuolin Town, zabugang District, arizada county. It is more than 300 meters high from the foot of the mountain to the top of the mountain. Houses, pagodas and caves are all over the mountain, reaching more than 600, forming a huge ancient building complex. Because it is built of clay soil from the surrounding soil forest, the ruins of the ancient castle are integrated with the soil forest at the foot. When the morning sun rises or the night falls, the ancient grid site will show a kind of fragmentary and tragic beauty against the background of the earth forest.

At the foot of the site, we found the staff responsible for the care, a very kind Tibetan old man. He gave us the site commentator, but we were very interested in the musical instrument he had. It was like east Burla, but there were six strings to play. Up to now, I still don't know what kind of instrument it is! Under our strong demand, the old man played us a song and opened our eyes.

In this devastated land, only temples are well preserved. As it is winter, few people come to the scenic area, so the main hall is closed. There are only a few tourists in the whole scenic area, so the old man took us into the site to open the Palace door for us, which also facilitates us to understand the history by asking the old man questions outside the interpreter.

Walking along the path from the entrance at the foot of the mountain, you first pass through four ancient temples, namely, the red temple, the white temple, the temple of Tara and the samsara temple. There is a mandala hall on the top of the mountain. To visit the ancient temple, the staff should unlock the door. There are many beautiful murals in the temple, and some of them are still shining and dazzling. Among the several temples, the white temple has the largest scale, which is called "rakangabo". In some small cave kilns, there are clay Buddha statues of the size of plates, which are made by lamas when they came here. It is said that in addition to the earth, there are many holy things mixed. 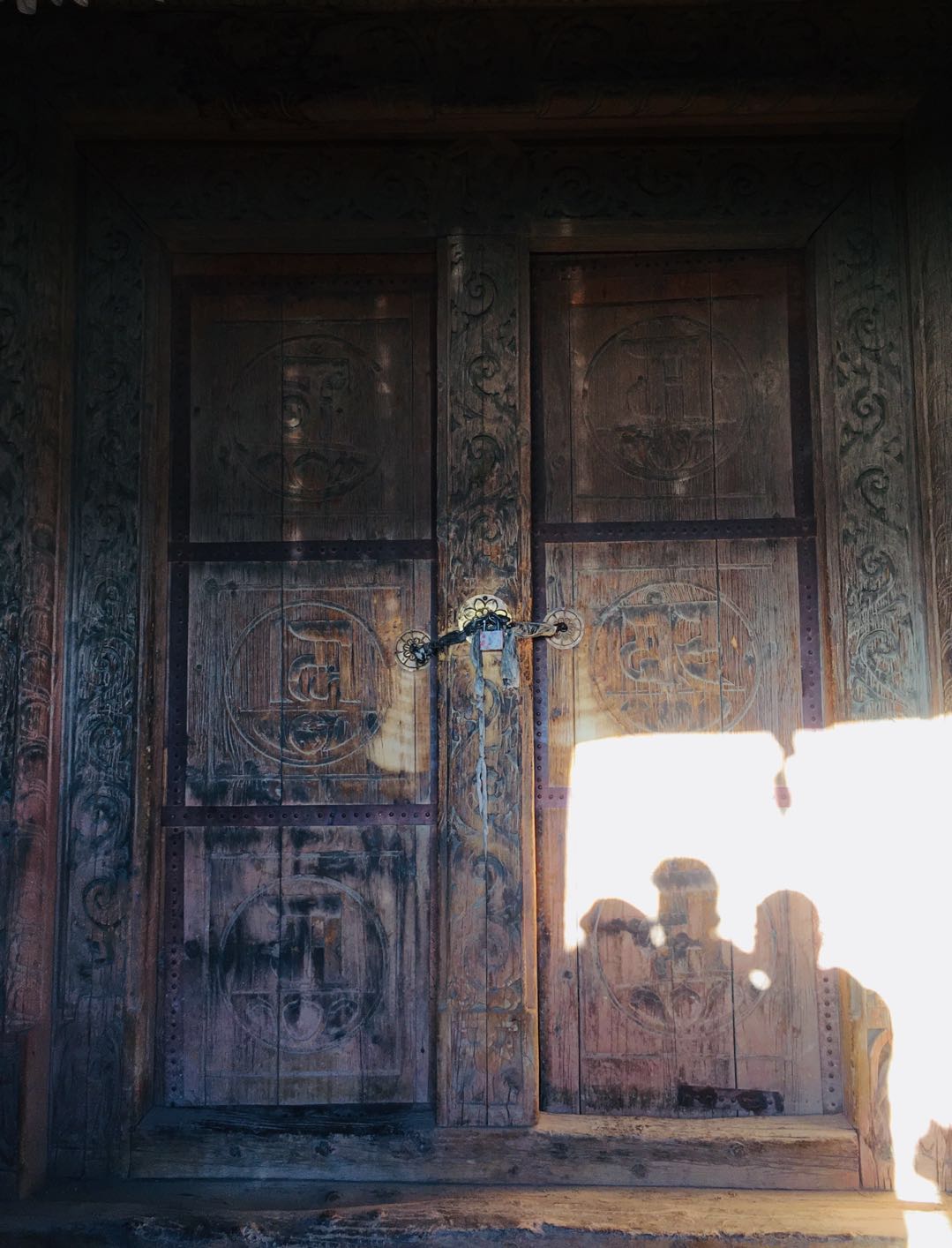 The area of the white temple and the red temple is about 300 square meters. The walls of the temple are covered with murals of different themes. In the white temple, there is a mural of the lineage of Zanpu and Guge kings of Tubo, which is very precious. The most remarkable mural in the red temple is the one in 1038 that king yixiwo of Ali invited the ancient Indian Buddhist master ADI gorge. In the painting, a group of dancers danced and there were people beating drums and blowing trumpets, which was vivid and lifelike. Although these murals are separated by hundreds of years, their color is still very bright.

There are two tunnels connecting the mountainside to the top of the mountain. On the north side of the cliff, there are still many pebbles piled up in the passage, leaving traces of the resistance of that year. After walking through the cliff side passage, I went north again and again. A courtyard with only four walls was the palace where the king discussed.

The main part of the mural in the temple of protecting the Dharma on the top of the mountain is mostly a Buddhist practice by both men and women of the tantric school. The bottom of the mural vividly shows the suffering of hell, and all kinds of criminal law are terrible. The edge ornament is a long row of dozens of naked mothers, charming and elegant, graceful, all the same. 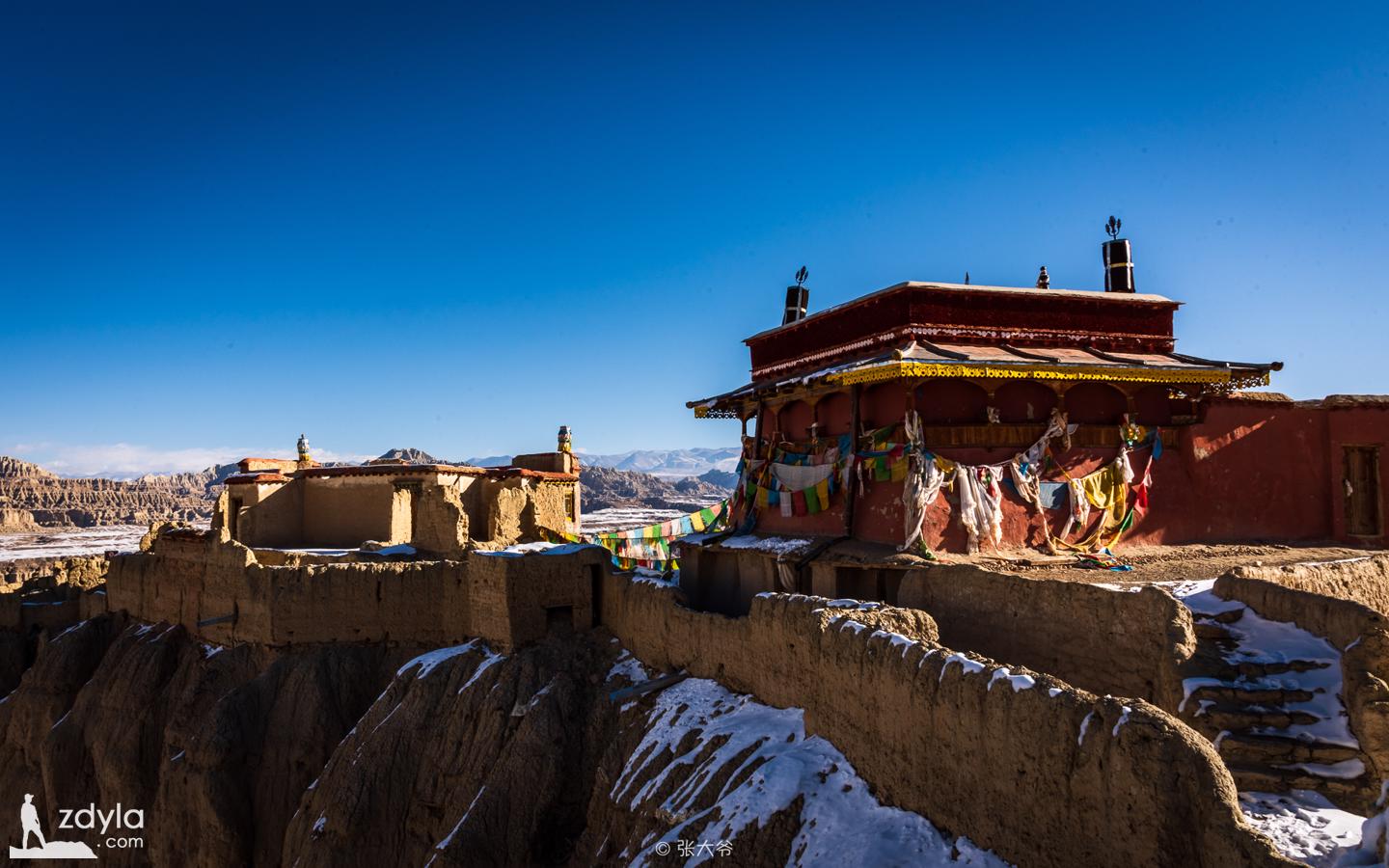 At the top of the site is an inconspicuous small door with a small sign saying "Winter Palace". You can go deep into the mountain along the steps. The passage in the mountain is so steep that only one person can go up and down. After tens of meters down, the cave has expanded, with dozens of houses of different sizes, most of which are only about 1.8 meters high. The outermost layer is breathable and transparent, similar to the balcony, which is relatively open. This was the winter shelter of King Guge, but now it is empty.

You can overlook the whole Zada forest from a high altitude. At first glance, the earth forest is like a natural row of castle towers. With only a little gaze, it gives birth to countless thoughts. It seems that there are thousands of troops secretly stationed in the carved castle, and they will come out at any time with a command. However, no matter how long you stare, you can't hear that angry voice after all. Nothing but the dead silence.

Back on the hillside, around the three temples, there are more than ten cave kilns, among which there are also ancient weapons such as shields, armor and swords. The dry weather makes these relics completely preserved.

Next to the Guge site is the doorman's residence, which is about 20 minutes walk to the mummified cave at the foot of the mountain. The mummy cave is located under a rock wall. The cave is about 2 meters from the ground. The cave is very spacious, tens of meters deep, full of headless mummies. It is said that the end of the cave is Lama, next to children, followed by women and men. Due to the dry climate, the corpse is not completely rotten and smells strange. There are many kinds of legends about the mummy cave. The most credible one is that when the ancient soldiers were defeated, the Ladakh people cut off the heads of the ancient soldiers who would rather die than surrender, while the bones were abandoned in the cave.

The beautiful scenery makes us forget to go back. The driver at the foot of the mountain yells impatiently at the top, but we can't hear it, and don't want to hear it. We have been playing for nearly four hours before we are reluctant to leave the mountain

Because we are going back to saga County in the rest of the time, the driver is so worried. Such a hurried trip made everyone a little unhappy. I had just arrived at Ali, but I had to leave again. Anyway, it was not enough to enjoy myself. So I secretly vowed to drive to play next time.

During the return trip, everyone began to be listless, complaining like a rising tide, wave after wave, invisibly, we created psychological pressure on the driver's master, but there was no way to adjust in the stipulated travel contract. We had to walk back along the way when we came. We were boring and brushing the photos just taken on our mobile phones

"Look outside..." The driver exclaimed.

I suddenly look up, the scenery outside the window makes me goose bumps! In the car, I yelled loudly

What a magnificent view it is. The endless Zada soil forest is continuous. It is covered with the new snow just last night. It becomes covered in silver and reflects the snow mountains around. It is a great shock. The sky is as blue as washed. They diffract blue and silver light from each other. It's ethereal. It's like a fairy tale world, more like the residence of gods. It's a fairyland.

I don't know why, I was so shocked by this wonderful work of nature that tears filled my eyes, and my heart surged out inexplicably, which made me unable to let go for a long time...

Like The Article To View All
Prev: Traffic on Renmin Avenue
Next: Memories of Tibet (19) : Goodbye, Ali