Wander outside reality door ZDY ' LOVE
now you really got Memories of Tibet (17) : The Ali In Sky
Use love to fantasize... 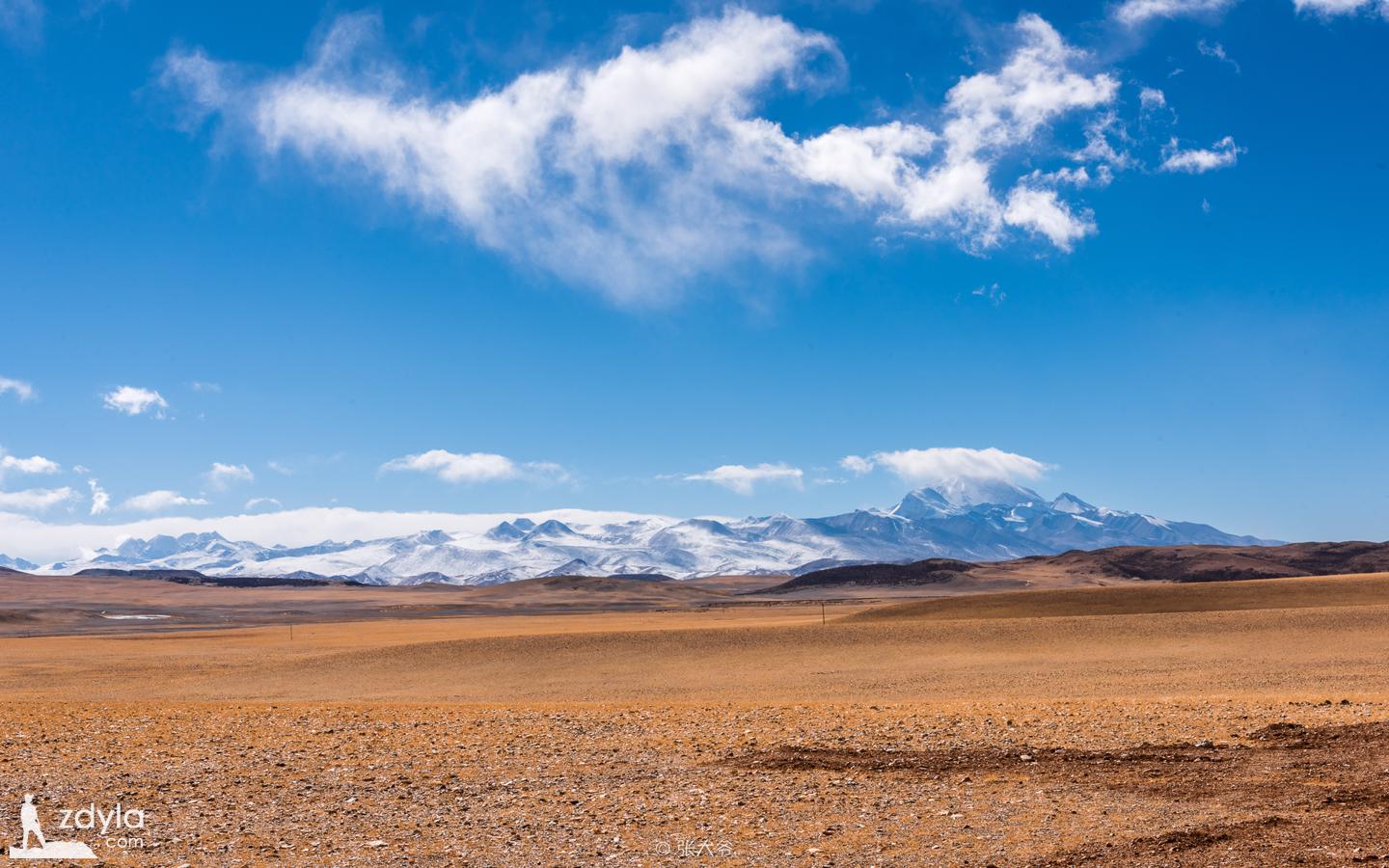 When I woke up in the morning, I found that saga county was still covered with clouds, and the snow had melted, but it was still white.

We sat in the car uneasily, trying to march to Zhongba county. When we climbed the assault pass, the snow around us disappeared without trace, even the clouds all felt hiding behind us, the front was bright, we ushered in a clear sky with tears. 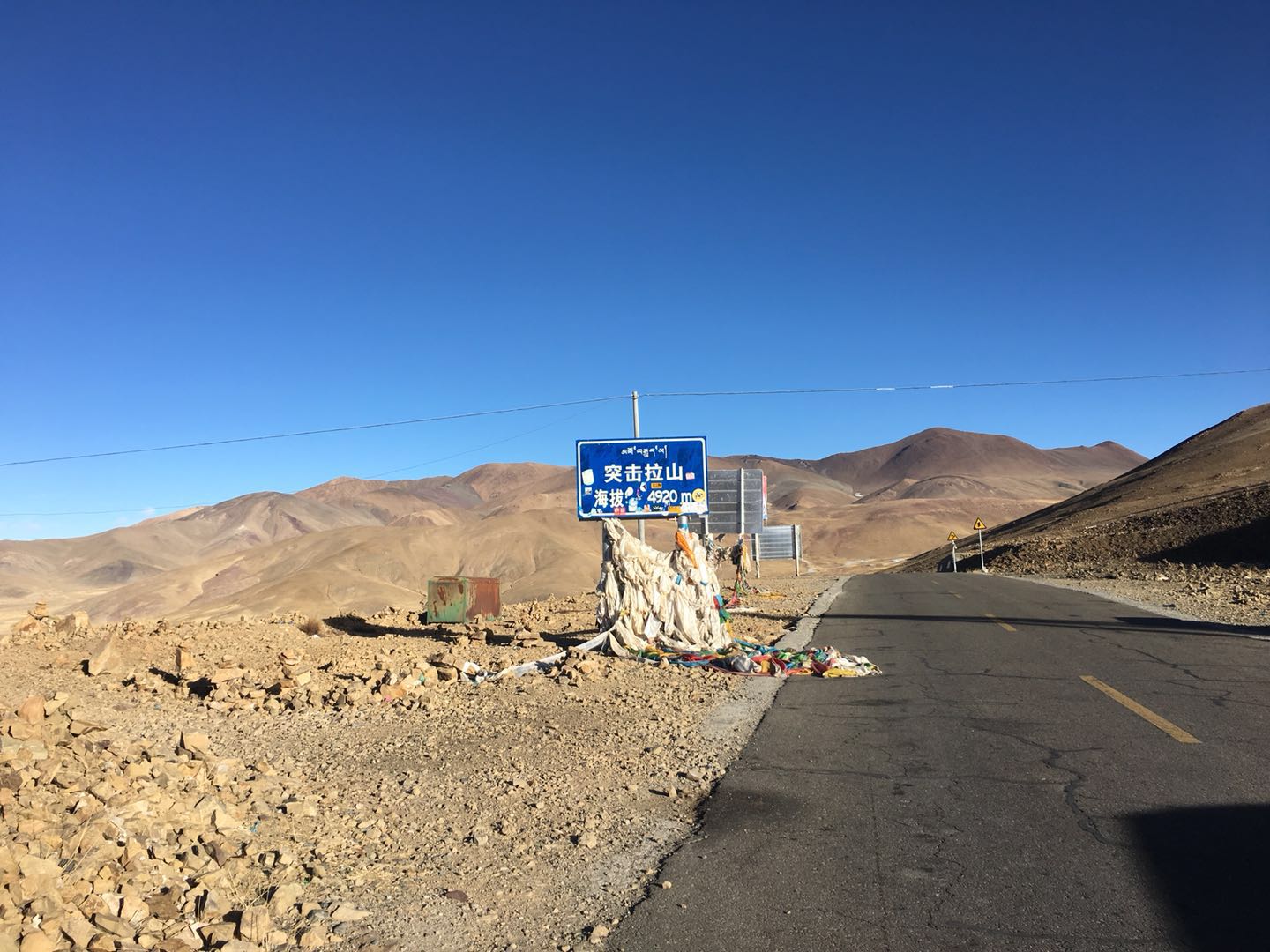 Everyone was so happy that the driver was relieved.

At noon, we brush Zhongba County along G219 to payang town. This is a good supply point. We chose a Sichuan restaurant with four dishes and one soup. Each dish costs 40 yuan and rice 25 yuan. The amount of dishes is sufficient. In this case, it is very affordable.

The driver's master told us that today's destination is Zada County in Ali Region, which is also the farthest place in our trip. As the drive is far away, we are advised to eat more, and my appetite suddenly becomes surprisingly good. I guess it's because of my good mood that I made two bowls of rice and countless dishes

After we had enough to eat, we went on our way. The scenery outside the window is more and more rough. The plain full of weeds is vast and boundless. The edge is surrounded by mountains and snow mountains. The road we drive is built in the middle of the plain. Once in a while, there are wild yaks. They are devouring the yellow grass and ignoring the roaring past.

The scenery outside the window is monotonous but full of charm, which makes us unable to let go. Xiao Wang stretches out the window with his camera, and can't take enough pictures. Before entering Pulan County, we saw a square arch, which was written in Chinese and Tibetan Languages as "Heaven Ali, the secret place of Western Tibet". Welcome! There are more and more snow mountains on both sides of the car. Even the wonders of desert, lake and snow mountain frame bombard our visual nerve in turn

Waiting for the car to drive to baga Township, you can have a clear view of the distant mount Gangrenboqi. Its high head, like a great pyramid, stands on the Ali plateau. I always only heard its name, but now when I saw it at the first sight, I felt goose bumps on my body suddenly, and my body was shaking like electricity 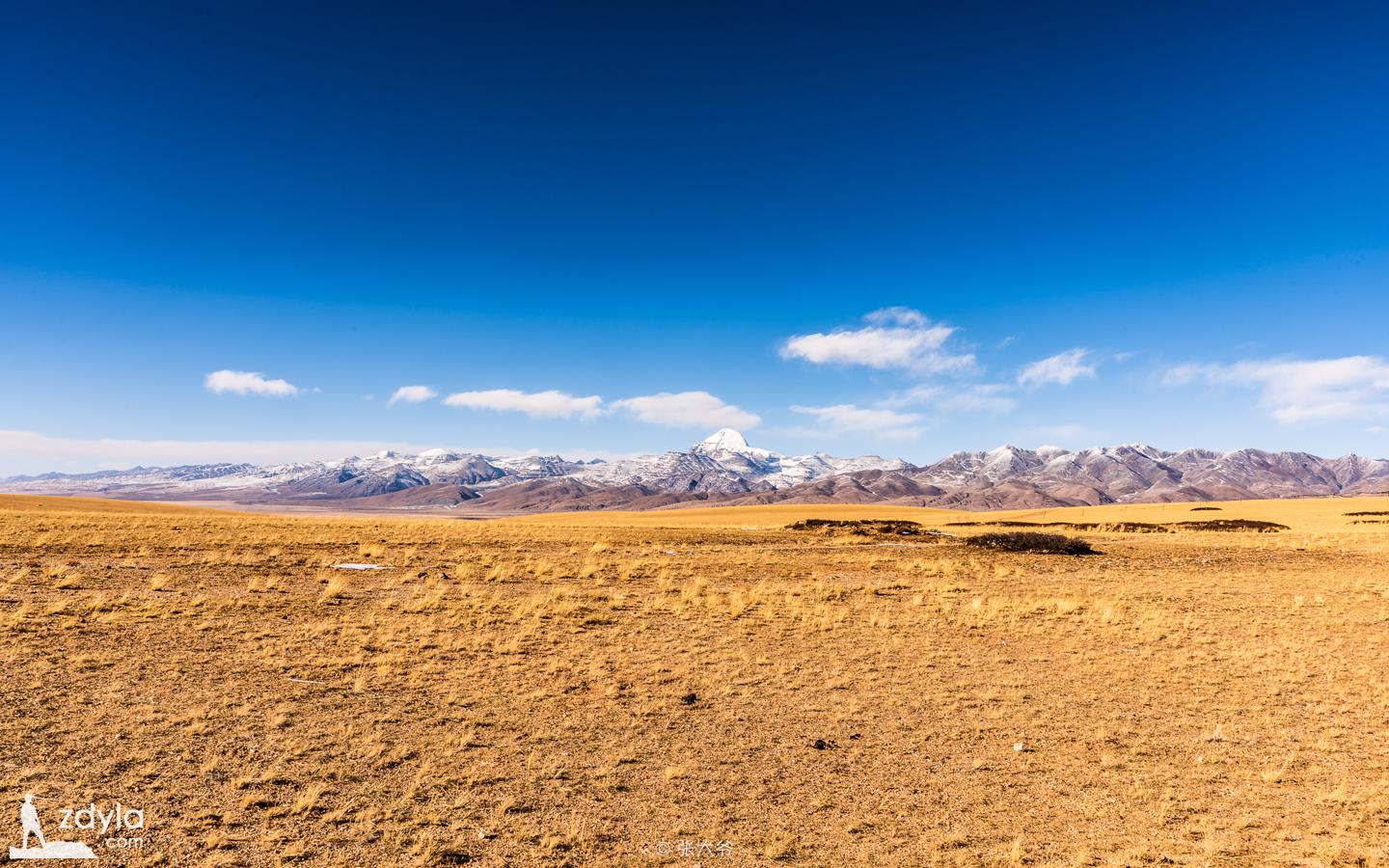 Gangrenboqi is recognized as a holy mountain in the world, and is recognized as the center of the world by Yongzhong Bon, Hinduism, Tibetan Buddhism and ancient Jainism in Tibet, China. Gangrenboqi is not the highest mountain in this area, but only its snow capped peak can shine with strange light under the sun, which is eye-catching. In particular, its special shape is quite different from the surrounding mountains, which makes people have to be full of religious piety and wonder.

It is said that the most famous Xumi mountain in Buddhism refers to gangren Boqi. According to the little Buddhist dictionary, Xumi, the name of the mountain, is the center of a small world. In the pre Buddhist period of yongzhongben religion, Gangrenboqi was known as the "nine heavy (ten thousand) word mountain". It is said that there are 360 deities of Bon religion living here. The founder of Bon religion, dun Bashin, came down from the sky. This mountain is the place of landing. In the Jainism that rose in the 5th-6th century BC, Gangrenboqi was called "ashtapoda", the highest mountain.

Not far away from Mount ganrenboqi is mapeongco, one of the three "God lakes" in Tibet. "Mapan yongcuo" means "invincible Jasper Lake". In Tibetan, "Mapan" means invincible and invincible.

The earliest name of mapeongyong Tso was "Matai", or "matejong Tso", which was the name of Guangcai Dragon King in yongzhongben religion. Buddhist scriptures say that there are four Dragon Kings in the four God lakes. At first, they always make waves and do harm to the people. In the Tang Dynasty, when the Tibetan king Chisong Dezan was in power, lianhuasheng accepted the four Dragon Kings, converted them to Buddhism, and gradually became the four Dharma protectors of Tibetan Buddhism. From then on, "matazuo" also changed its name to "mapanyongcuo". Sometimes it was written as "mafamucuo", which means "the invincible jade lake" in Tibetan.

It is said that maponongcuo is the most holy lake, the dew given to the world by Shengle. The holy water can clean the troubles and evils in people's hearts. She is the oldest and most sacred place among all holy places of yongzhongben, Indian Buddhism and Hinduism. She is the perfect Lake in her heart. She is the real heaven in the universe, Shangri La of the gods, and the paradise of all things. Hinduism says it is the home of Shiva.

The ghost Lake laonco is the neighbor of the holy lake, with the same beautiful scenery and the same blue water. However, it has been branded as "ghost Lake" and entered another volume. In fact, Shenghu Guihu Lake was originally a lake. Because the debris carried by glaciers was accumulated in the middle of the original lake after melting, the lake bed was raised, and then global warming, evaporation intensified glacier shrinkage, supply water decreased, and the area of the lake shrank, resulting in the decrease of lake water level.

The driver took us close to the lake. The water was frozen into ice. They collided and rattled in the waves of the lake. Every sound was like the sound of soul, strange and confused.

Considering that there is still a long way to go, we are reluctant to leave here. When we leave, we can't help looking through the window.

Before arriving in Zhada County, there are still many mountain roads to go. Before dark, only the image of longala mountain was left in my mind. The snow on the mountain has not completely melted. They are attached to the ravines of the mountain, forming a snow line, which sets off the mountain outline of longgala mountain. The exposed mountain between the snow line and the snow line presents colorful patterns under the sun setting. 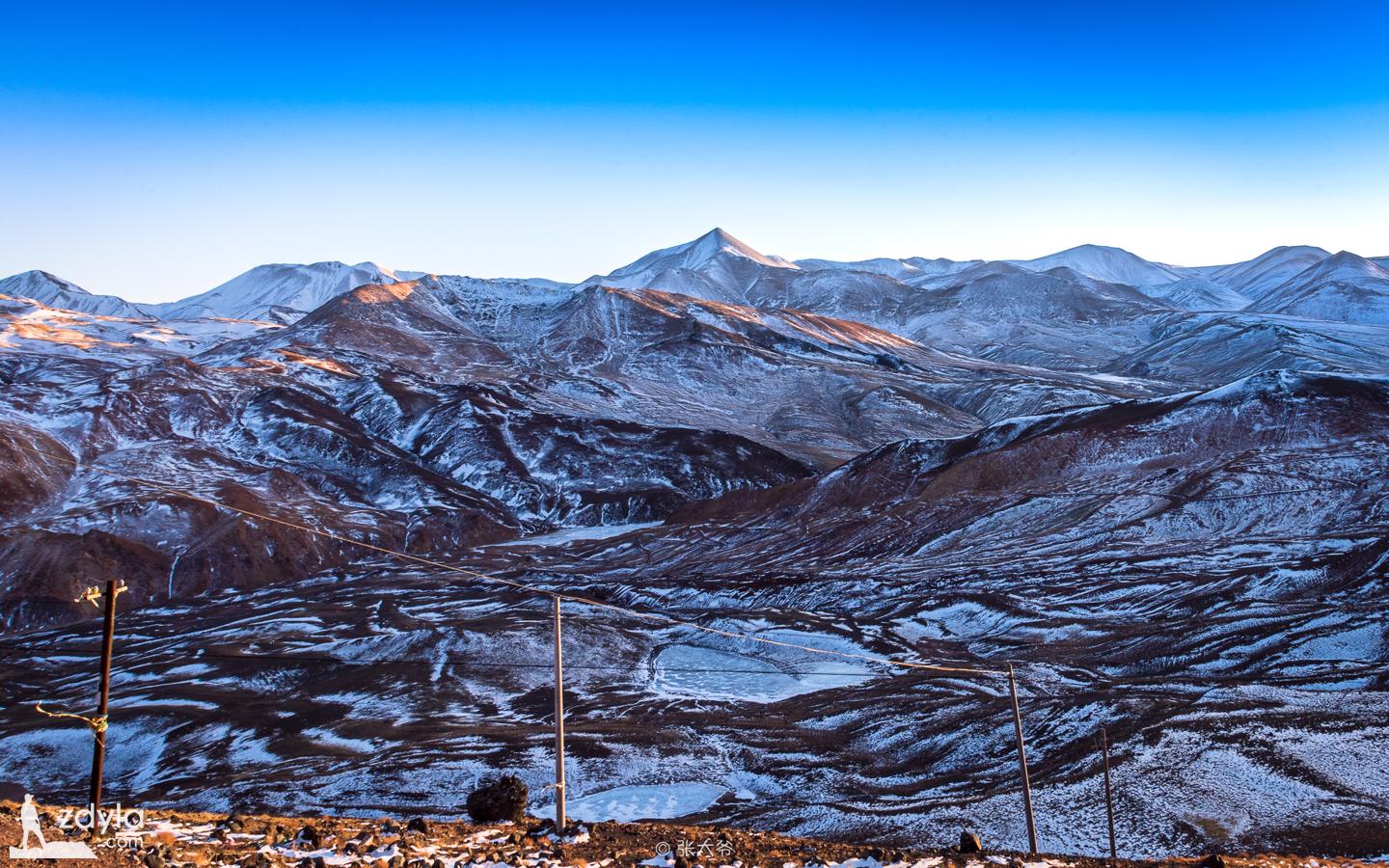 Longgala mountain, with an altitude of 5160 meters, is also known as "wuse mountain". Among them, longgacuoqiong lake, the world's smallest Lake known as the "tears of angels", is also held. Next to it is another drop of "green tears", which has been frozen.

Soon, our car was buried in the thick black, the mountains, only this car in the lonely driving, all around empty, car headlights can not light the road ahead. The driver was very nervous, because the more he went to the mountain, the more snow there was around him. Some roads not far from the road class had been cleaned by snowplows, but some roads were covered with thick new snow, and some roads on the hillside were covered with ice formed by melting snow water in the afternoon

At one time, the speed slowed down to more than 20 miles, because only the driver knew that there were cliffs on both sides of the road, and we came here for the first time, which was fearless.

In the last mountain road of more than twenty-three kilometers, we walked for more than four hours and finally arrived at Zada county. In addition to deliberately slow down, we also passed border checkpoints. For security reasons, they forced vehicles to slow down, and even gave such mandatory orders as "ten kilometers must be completed in forty minutes".

At eleven o'clock in the evening, we finally arrived in Zada county. The temperature outside the car made me experience the coldest feeling since my trip to Tibet. The temperature was as low as - 40 ℃ and there was a strong wind Fortunately, the hotel has heating, and the corresponding accommodation costs will be more expensive, but in this extremely cold condition, compared with the cold feeling on the body, it's ridiculous to care about those.

When carrying things, the sky that I glimpsed by chance is so pure and clean. It's really worthy of "Ali in the sky". The sky is low as if it's on the top of my head. The stars all over the sky seem to be a deep eye, each of which is shining brightly.

I stand in the same place with my head up, screen my breath, obsessive-compulsive disorder makes me want to keep this absolute peace

When others saw me, they couldn't help raising their heads. Suddenly, there was a sound of exclamation and admiration in their ears. Then they gradually calmed down and enjoyed the peace...

Like The Article To View All
Prev: Jiaoluotoushan Lighthouse
Next: Traffic on Renmin Avenue