Wander outside reality door ZDY ' LOVE
now you really got Memories of Tibet (11) : Samye!
Use love to fantasize... 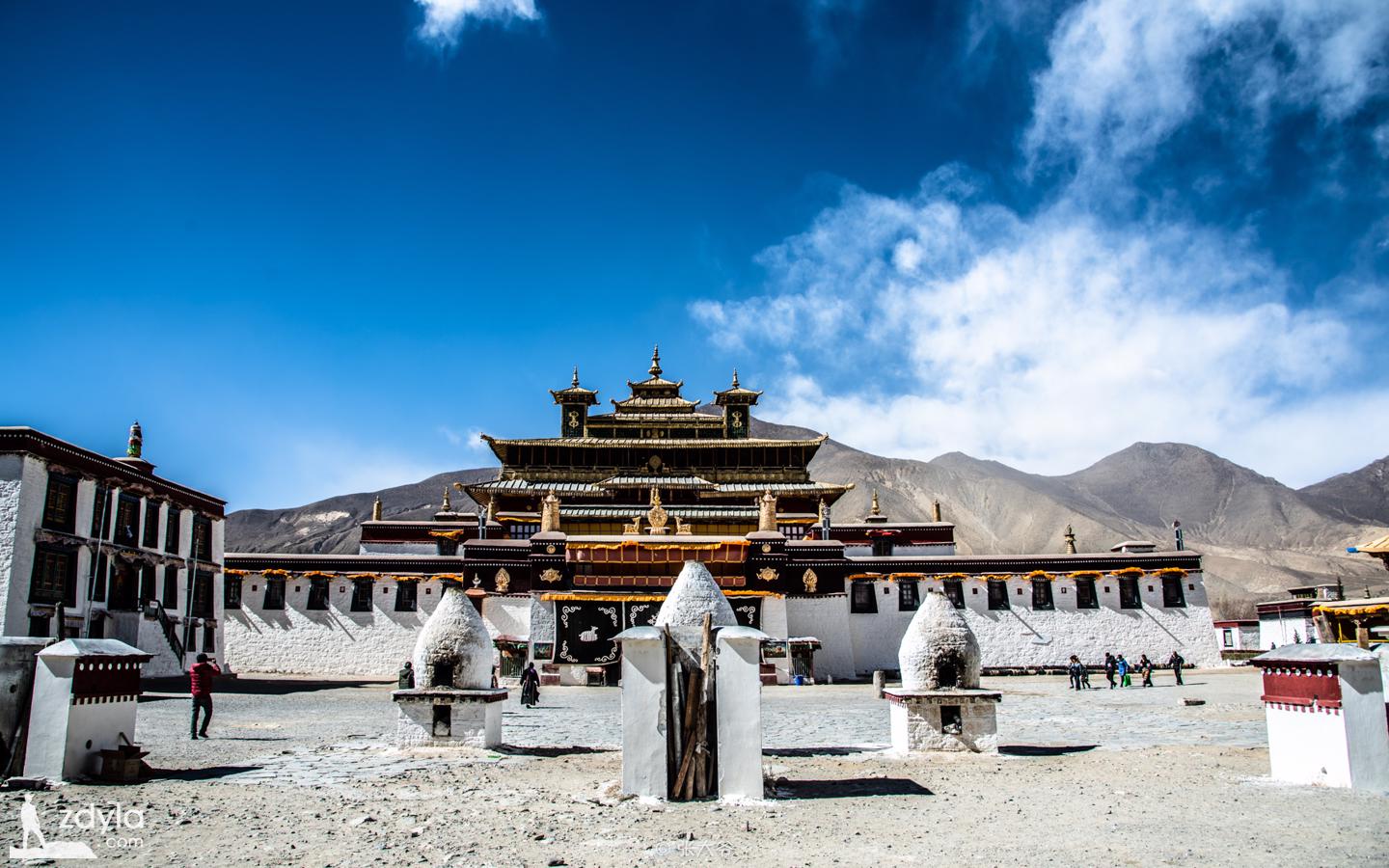 Early in the morning, we were awakened by the crowing of chickens.

The journey of Linzhi ring road is half completed, and the next step is the return journey. The return route is chosen to pass through Shannan area, including three important scenic spots. One is ramratuo, which is said to be able to see the past life and the present life in the reflection of the lake; the second is yongbulakan, the first palace in Tibetan history; the third is Sangye temple, the first temple with complete Buddhist monks in Tibet, which is the origin of Tibetan Buddhism.

After driving out of Linzhi, Milin County, the surrounding environment began to deteriorate. There are wild mountains on both sides of the road. It has to be said that Shannan area and Linzhi Area seem to be two worlds, one is moist and cool, the other is dry and hot

There are many mountains and few trees around us, and the sandstorm is rampant. We walked a short way during lunch in Lang County, but we were hit by the sand and doubted our life.

When we arrived in Jiacha County, we got the news that it was snowy in winter and we couldn't enter the qukejiecong mountain, so we regretted to give up ramratso

Then, we rushed to Samye temple. The full name of Sangye temple is "bezama Sangye min, jiulunji, baizulakang", and the Tibetan meaning is "auspicious red rock contemplates endless changes and becomes a shrine".

At the end of the 8th century, Tubo reached its heyday. He invited two Buddhist masters, Ji Hu and lianhuasheng, from India, to Tibet to promote Buddhism and decided to build a temple for them. Through the field survey of lianhuasheng and others, the final site is located on the North Bank of the Yarlung Zangbo River near the Tubo Winter Palace, and the construction plan is designed by Ji Hu. According to the records of Sangye temple, in 762, Chisong Dezan personally laid the foundation for the temple. After 12 years of construction under the auspices of lianhuasheng, it was completed at the end of 775. There is a legend that when it was first built, Chisong Dezan was eager to know the scene after it was built, so lianhuasheng changed the illusion of the temple from his hands. After seeing it, Chisong Dezan could not help exclaiming "Sangye" (meaning "unexpected", "unimaginable"), and later took this exclamation as the name of the temple.

After the completion of the Sangye temple, a grand opening ceremony was held. From Tang Dynasty, India and Khotan, Chisong Dezan invited monks to live in temples and preach sutras, and announced that all Tubo people were Buddhist. In addition, he also personally selected seven noble children as monks, becoming the first generation Lama of Sangye temple and the first batch of monks in Tibet, known as the "pre-test seven people". Therefore, Sangye temple is the first formal temple in Tibet with three treasures of Buddhism, Dharma and monk, and it has a high position in the Tibetan Buddhist community.

In the middle of the 9th century, the spread of Buddhism was forbidden in Tubo and the Sangye temple was also banned. After reopening in the late 10th century, it became the central monastery of Ningma sect (red religion). During the reign of Sakya, the temple was repaired and monks were sent to live in the temple. Since then, the two groups of NIMA and Sakya coexisted in the same temple.

The highest and spectacular building in the temple is wuce Hall (Wuzi Rensong LAKANG), also known as dorgid hall. The hall faces east from the West. It seems to have five floors in appearance, but only three floors in reality. The height of each floor is between 5.5m and 6m. The ground floor of the hall is Tibetan architecture, the middle floor is Chinese architecture, and the upper floor is Indian style. The craftsmen of the three places design and construct the hall respectively. Therefore, some people call the temple "Sanxiang Temple".

Outside the main hall, there is an ambulatory for a week, with three gates in the East, South and North. On the top of the East Gate building is decorated with a warped building, under which a huge "fresh cloth" is hung. The wall around the door is decorated with a relief that symbolizes auspiciousness and wealth called "zhaxita knot". The gatehouse is connected with the left and right ambulatory. There are two rows of columns under the ambulatory. The walls of the ambulatory are painted with exquisite murals.

The ground floor of the main hall is divided into two parts, the scripture hall in the front and the Buddha Hall in the back. The Sutra hall is seven wide and four deep. On both sides of the hall are the statues of the forerunners of Tibetan Buddhism. The temple is surrounded by murals of thousands of Buddhas. In the temple, there is a statue of Sakyamuni carved out of a whole Boulder, which is 3.9 meters high. It is said that the temple already existed at the beginning of its construction. There are 5 Bodhisattvas and 1 Dharma protecting deity on both sides of the Buddha statue, which are newly built in recent years.

In the middle level, there are Buddhist temples and Dalai Lama's dormitories, which are the scripture hall style buildings of the Han nationality. There is a famous "Tibetan history" mural on the corridor, which records the history from the ancient legend of the combination of luochanv and Shenhou to the Tibetan until the reign of the ninth Dalai Lama. In the hall, there are the statues of lotus peanut master, Sakyamuni and immeasurable light Buddha.

In the upper hall, there are two rows of back shaped columns. In the center, there are big sun Buddha. On both sides, there are eight Bodhisattvas and many happy Buddha statues, all of which are shaped according to the shape of Indians. The roof of the hall is a Vajra throne type roof, with three eaves in the middle and single eaves in the four corners. It is also Indian style.

In addition, there is a nine story exhibition hall in front of the east gate of wuce hall. During the Tibetan Sun Festival, giant embroidered images of Sakyamuni are hung on the high wall. However, during the cultural revolution, the upper six floors of the hall were demolished, so now there are only three floors.

On the south side of the east gate, there are Square Pillar Stone Steles in chisongdezan period, with simple style and no decorative patterns. This is the famous "Sanye Xingfo Zhengjian stele", the inscriptions are all ancient Tibetan, the content of which is the oath made by Chisong Dezan in 779 ad to support Sanye temple. In the porch of the main hall, there is also the bell made by Princess Chisong and Prince Chisong. It is the first copper bell made in Tibet. The bell body is engraved with Tibetan inscriptions, which praise the deeds of Chisong Dezan to promote Buddhism.

There is a shrine outside wuce hall, which symbolizes four continents. Zhengdong is JiangBai forest, which worships Manjusri Bodhisattva. To the west is Qiang Bahraini, which is dedicated to Maitreya Buddha. In the south is Aya bazinlin, which worships the Buddha of immeasurable light. In the north is sangjielin, originally dedicated to the statue of Sakyamuni, now dedicated to the statue of thousands of Buddhas, whose murals are mainly Buddhist scriptures. 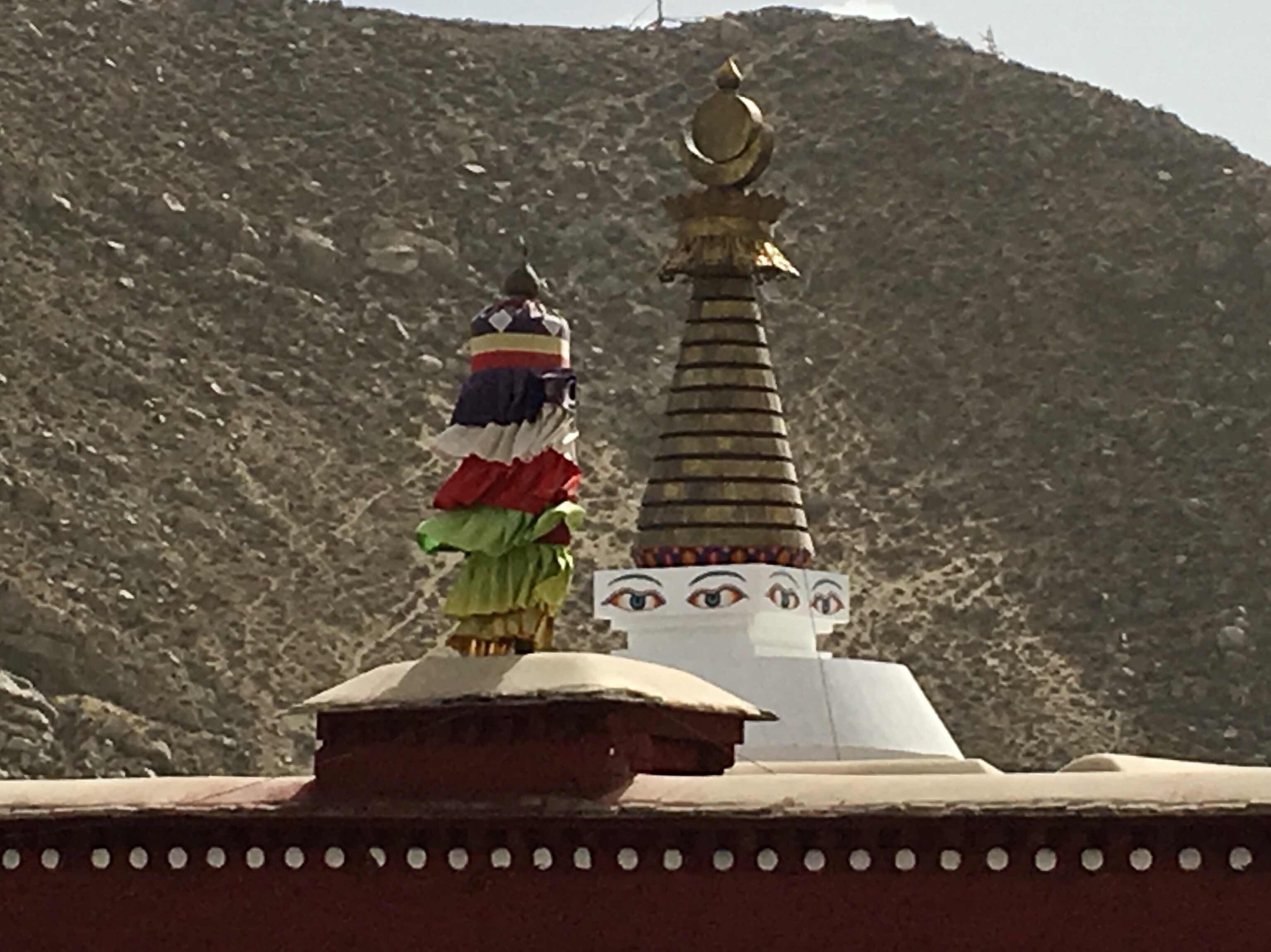 There are four red, green, black and white pagodas in the four corners of wuce hall, symbolizing the four kings of heaven. The black tower is made of bricks, and the body of the tower is like three layers of cauldrons. The green tower is built of green glazed brick, with three floors in total, two floors below and four sides with niches. The top floor is covered with a bowl type tower body. The body of the white pagoda is square, and above the waist, it shrinks to ladder shape layer by layer. There are 108 small pagodas on the square wall around the tower base. The red pagoda is red and glossy. Its shape is square and round, like a bell.

The wall of Sangye temple is 1008 meters long and 4 meters high. There is a red pottery pagoda every 1 meter on the wall, totaling 1008 pagodas. There is a gate on each side of the wall, and the east gate is the main gate. There are also buildings in the temple, such as qumlingsong (three imperial concubines Palace), sutra room, sutra translation field, storehouse and monk house. Not far from the wall, there is a circle of Mani corridor wall, and there is a turning path between the two walls.

There are a large number of clay sculptures, stone carvings, murals and other works of art in Sangye temple. There are murals and Thangka (Buddhist scroll paintings) everywhere on the walls of halls, corridors and corridors. The themes mainly include Buddha, Bodhisattva, Buddhist stories and panorama of Samye temple. In addition, there are many Tibetan historical records, biographies of lianhuasheng and paintings reflecting local customs and life of monks, which are rare in other monasteries.

Standing in the ring corridor of wuce hall, we were surprised to see a wonder created by nature! In the distance where the heaven and the earth meet, suddenly a pale yellow gauze net spreads slowly towards us, covering the heaven and the earth. As time goes on, it gets closer and closer. Soon, we are swallowed in the wind and sand

The sand slapped my face mercilessly. I didn't want to visit it, just wanted to get back to the car. Close the car door, the sand crackled against the glass window, the sky was yellow, it was a doomsday scene. 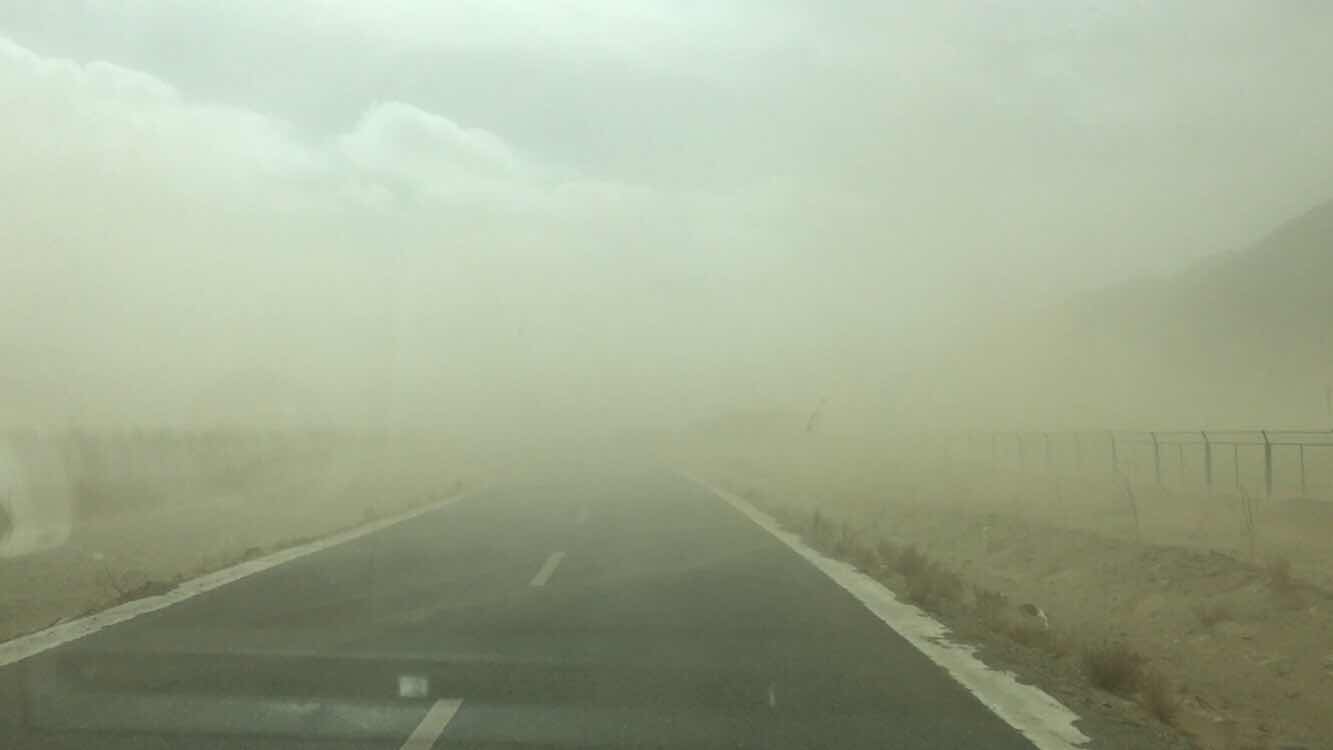 When the car drives into the road, the sand on both sides of the road flows where the wind blows. The sand on the roadside seems to be 10 cm thick. The driver master who has been driving in Tibet for a long time began to marvel. He has never seen such a big sandstorm before, and he was caught up by us

It took us more than an hour to get out of the sandstorm area. We were amazed and stimulated all the way, which made us think of yongblakang after arriving at Lhasa

It's a pity to miss it again!

In the evening, when we have dinner together, we talk about all kinds of surprises and regrets in the journey. The most important thing in our mind is the God lake, ramrazzo. No matter how much regret can only be turned into a good memory. Next time we make an appointment, we must continue this fate

Like The Article To View All
Prev: Memories of Tibet (10) : Spear Piercing The Sky
Next: The significance of travel