Wander outside reality door ZDY ' LOVE
now you really got Travel to Nepal (12) : Having a big meal and crossing the new year
Use love to fantasize...

Xiao Hai and I passed through the upper barrier of the road, and finally came to the gate of the casino. As I saw across the road before, two Nepalese Security Guards smile to help us open the door, and then "please" us into

At the moment of opening the door, there was a bright light shining into my eyes from the door, and suddenly my eyes were like day! I can't help but soft eyes, let the uncomfortable feeling slowly ease, before I fully adapt to the surrounding strong light, I have felt that I am stepping on a soft carpet

I look at the interior, the radiant marble floor and the giant chandeliers on the ceiling complement each other, creating a gorgeous atmosphere. The upper part of the door and window is made into an ellipse, and the edge of gypsum line with patterns is used to highlight the sense of space and three-dimensional. The wall surface painted with high-quality latex paint emits soft "earth gold" color, setting off a luxurious effect. Such a European style decoration style, always reflects a noble, atmospheric feeling

I seem to be in another world again! Just a door apart, but two different heaven and earth, the contrast of the big, startled me is scalp numbness

After entering the door, there is a small hall. There are staff in the small hall to carry out routine security inspection for the guests. After passing the inspection, the service personnel will lead them to the inner hall. Before I could stand still, I saw a staff member in a black suit. He looked like an Indian, because his skin was darker than Nepalese, and his eyes were bigger than Nepalese people. When he came up, he directly motioned us to show our ID card.

Xiaohai calmly took out the membership card and handed it to the other party, and then he was arranged for routine security inspection. The Indian took over my ID card, studied both the front and the back, and found nothing wrong. When I passed the security check, he handed it back to me with both hands.

All the bad things I imagined didn't happen. A hanging heart fell to the ground.

The service staff opened the door of the inner hall for us, and the room suddenly opened up. The area of the inner hall was half the size of a football field. There were all kinds of gambling tables in it, no matter which table was surrounded by guests. Among the guests, most of them are Chinese and Indian, and there are few foreigners! Strangely, no Nepalese

"The owner of this casino is an Indian, and his clients are only Chinese and Indian, probably because there are so many local tyrants in these two countries Ha ha ha... " I don't know why I nodded and went around with this table and that table.

In casinos, there are all kinds of gambling methods, such as card games and dice throwing. There are beauties and Dutch officials in front of each table. Those who don't like to play around the table, and slot machines are placed on the wall. Waiters carry wine plates around the crowd, providing drinks and snacks for guests. Security personnel in black suits are scattered in every corner of the casino, they always supervise the guests not to take pictures, not to be ridiculous! All this is the same as the scenes in Hong Kong's gambling films. I like Alice, from the imagination into the reality, all experience inexplicably fresh

Before visiting a few gambling tables, Xiao Hai met several former gamblers. Most of them had lost their budget today. Some were unconvinced and prepared to continue to add money. They were admonished by everyone

I asked Xiaohai, "are they all friends who come to Nepal with you?"

Xiao Hai waved his hand and said, "no, they all met in the casino."

I can see that this is all caused by a few free chips! Watching them throw the chips out and then take them back. The playing cards in their hands are tightly protected like a baby. After a nervous operation, the "expected pieces" in their pockets are few and far between. I have seen them for a while, and I feel bored!

Fortunately, I am only interested in the snow mountain in Nepal, and the rest is "eating"! I asked Xiao Hai, "where is the canteen? Shall we go to dinner

Xiao Hai said with a look of disgust: "huh? What's the canteen It's a restaurant

I followed Xiao Hai's buttocks, passed through a group of people, and finally saw the restaurant. Who knows, the casino is so luxurious, but the restaurant is so small that it can only accommodate 20 or 30 people at the same time. People waiting for dinner have already lined up for a long time

Fortunately, the restaurant is full of food. When it's our turn, we can still use Linglang to describe it. There are nearly 20 varieties of staple food, snacks, fruits, meat, eggs, milk and desserts. There are various personalized flavors for our dear guests, such as Indian curry, Chinese fried rice, etc

Finally, I'm full. Sure enough, Chinese stomach still needs Chinese food. It's the first time I've come to Nepal to eat so comfortable! Xiao Hai picked out two glasses of champagne from the waiter's wine plate, handed one to me, and the other one poured into his mouth and drank it out. At this point, the meal ended successfully

After dinner, we spent time in the casino. Xiao Hai lost hundreds of rupees and tried it in the pool. It can be imagined that there was no ripple at all

We didn't get out of the casino until more than ten o'clock! Return to the world again, the heart actually had the steady feeling 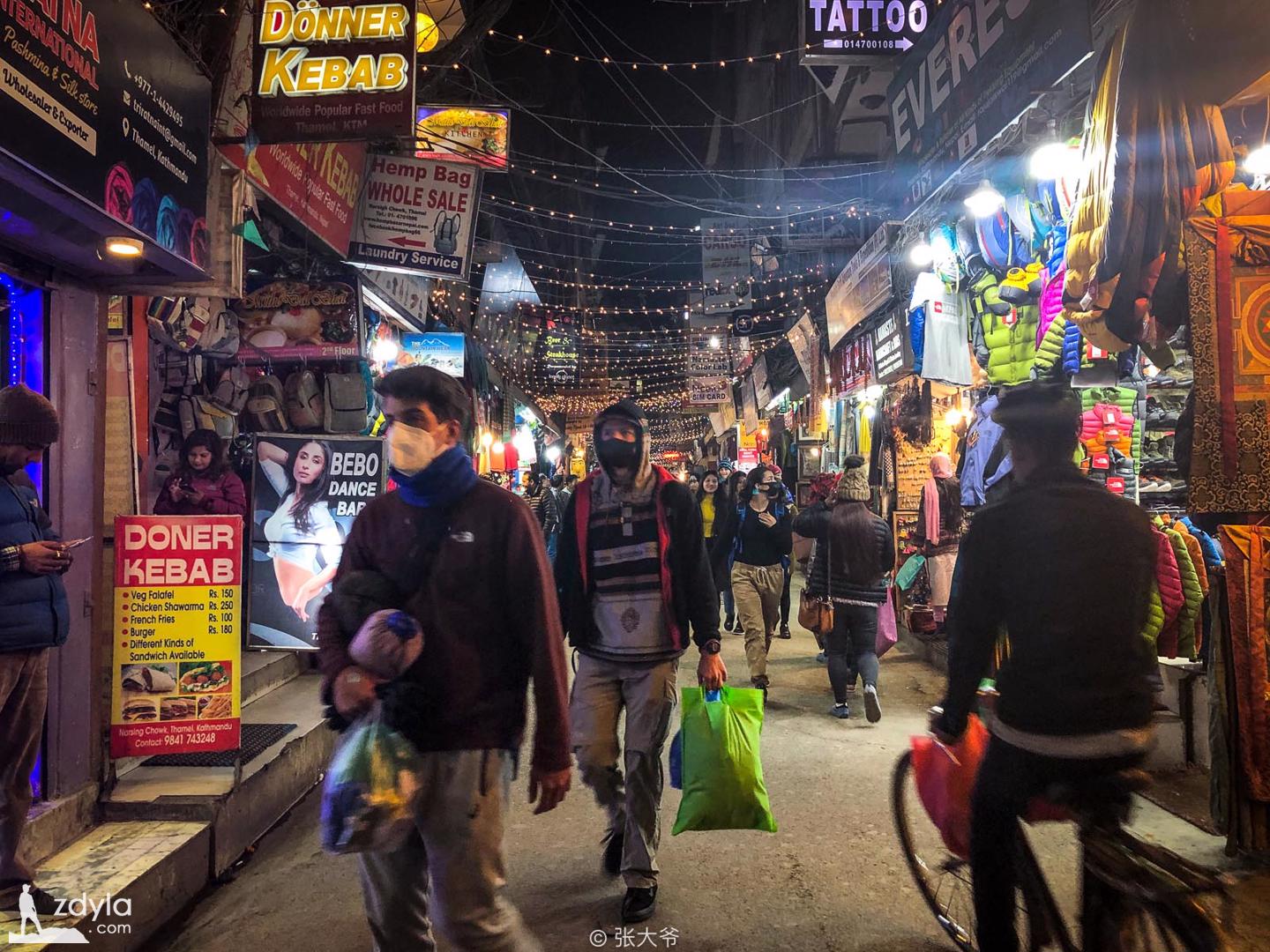 We turned into Tamil and saw lights everywhere. People hung a series of small lights between shops, like stars in the dark night sky. There are lanterns hanging outside the door of some shops. Maybe the boss is a Chinese!

Although Xiaohai and I do not know the specific location of the new year's Eve party, the scope of Tamil is not very large, we can easily gather together with the flow of people. After walking a few blocks, I didn't see the stage yet. I could hear the rhythmic playing music in the sky. I wonder, is this the organizer is still warming up for the new year's party?

We follow the music, it seems to become our guide. The closer we get, the louder it sounds. When we turn the last corner, the sound waves will come directly. We feel that the real cheeks are shaking slightly with the rhythm

Compared with other streets, the place where the activities are held is indeed much more spacious, but it can not be called a square. People gather here from all directions, and the venue has already been filled up. But it doesn't matter, because the joy on people's faces is not half false. They wave their arms to the music and enjoy the rhythm of the subwoofer. It turns out that there is no party here, only a huge Carnival scene!

Xiao Hai and I are walking in the crowd, just want to get closer to the stage. We finally stood at the end of the street and saw a cool female DJ standing on the stage at the end of the street. She was wearing heavy earphones and playing with the tuner around her. Colorful lights from behind her shot into the sky, or swing around, in the mist covered stage blessing, it looks cool.

As the rhythm of the music changes from rhythm to rapidity, the female DJ reaches out her hands and shouts, "are you ready --"

At the moment, people hold their beating heart, under the catalysis of music rhythm, they are like a racing car waiting for the starting gun to start. When the adrenaline secretion reaches its peak, the huge roar of the subwoofer begins to vibrate, followed by the perfect release of pleasure

Hi, the climax of the scene continued to rise, until the new year's clock began to count down. DJ skillfully combined the music with the countdown seconds, and people began to silently read "10, 9, 8, 7, 6, 5, 4, 3, 2, 1 .”。 When the number "0" appeared, the scene was instantly ignited by the atmosphere of high heat and concentration, and the degree of people's Carnival exceeded any previous climax

It was not until people's hearts were about to burn out that the mayor of Kathmandu began to deliver a new year's speech. His speech was very brief, but I felt warm.

People began to slowly withdraw from the scene of the event, and the activity finally ended in the applause, cheers and speeches of people...